Protesters in Hong Kong have flooded the streets and the grounds of government offices in rallies over the past three weeks against an unpopular bill that has thrown the territory into a political crisis. On Wednesday, they directed their appeals to a new audience: the world.

Hundreds of protesters, dressed in black and white T-shirts, demonstrated at foreign governments’ consulates in Hong Kong to demand that world leaders address their concerns at the annual summit of the Group of 20 later this week in Osaka, Japan.

The turnout paled in comparison to recent demonstrations, which have been among the city’s largest, that have already forced Carrie Lam, the embattled chief executive, to suspend the bill. The contentious bill would allow the extradition of Hong Kong’s residents and visitors to mainland China’s opaque judicial system.

But demonstrators still want the legislation to be formally withdrawn and they want to send a broader message that they will resist the erosion of the civil liberties that set the city apart from the rest of China.

The protesters see the G20 as a way to pressure China

The demonstrators hope to draw to Hong Kong the attention of the leaders of 19 industrialized and emerging nations and the European Union, who will soon arrive in Osaka. They say that world events have given them extra leverage in forcing Mrs. Lam and Beijing’s leaders to agree to suspend the law.

“Without the trade war chaos and the G20 summit, would Carrie Lam have announced the suspension?” said Joshua Wong, a prominent youth activist.

The demonstrations represent the biggest resistance to Beijing’s rule on Chinese soil since Britain handed back the territory in 1997, said Willy Lam, a political scientist at the Chinese University of Hong Kong.

“This is a direct slap in the face of Xi Jinping,” said Mr. Lam, “and so some Western countries, particularly the U.S., may want to use this as an excuse to further put pressure on Xi Jinping.” 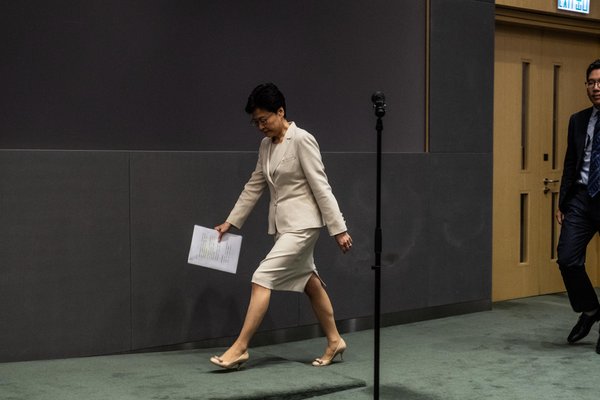 But China says it will have none of it. Zhang Jun, an assistant foreign minister, told reporters this week that Beijing opposed discussing Hong Kong at the G-20. “Under no circumstance would we allow any country or individual to intervene in Chinese internal politics,” he said.

Jeremy Hunt, the British foreign secretary, said on Tuesday that the government would not issue licenses for crowd control equipment to Hong Kong “unless we are satisfied that concerns raised on human rights and fundamental freedoms have been thoroughly addressed.” He called for an independent investigation of police violence, echoing one of the demands of the protesters.

President Trump is a particular focus for them

The protesters’ first stop in what they described as a marathon march was the American consulate. There, Lawrence Wong, a 46-year-old filmmaker, handed to an American consulate spokesman a letter addressed to President Trump. The letter asked Mr. Trump to raise Hong Kong’s issues at the G20 with Xi Jinping, China’s top leader.

“We hope President Trump can give President Xi some pressure,” Mr. Wong said in an interview later. “We need all the friends of liberal democracy, people who believe in human rights and freedom, to be on our side.”

President Trump has expressed sympathy for the Hong Kong protesters, but not offered to take up their cause at the summit, where he is expected to meet with Mr. Xi to discuss trade.

But a bipartisan group of American lawmakers, prompted by the trade war and the protests, earlier this month introduced a bill that could affect Hong Kong’s trade status. That bill angered China, which summoned a senior American diplomat in Beijing to lodge a complaint against what the government saw as foreign interference in its affairs.

If passed, the bill would require the State Department to affirm every year that the territory remained autonomous from the mainland. If the department found that Hong Kong had lost its autonomy, that could make Hong Kong subject to controls the United States imposes to prevent the shipment of many high-tech, militarily sensitive goods to mainland China.

Edward Yau, Hong Kong’s secretary of commerce and economic development, said that Hong Kong’s separate trade status from mainland China is secured by many international agreements and by pacts with Beijing. The city is a big base for American banks and other companies, he added.

“We help push the door open for overseas companies into the mainland,” Mr. Yau said in an interview in his office last week.

The city’s leader is lying low as pressure grows

Mrs. Lam appeared to be lying low this week, perhaps to avoid embarrassing Mr. Xi ahead of his trip to Japan or setting off a fresh conflict with her critics at home.

A standing weekly meeting of her Executive Council, scheduled for Tuesday, was canceled. And even though Hong Kong’s protests have made global headlines in recent days, her office has not issued a news release for a week.

Mrs. Lam’s popularity in the city has plunged since she started pushing the extradition bill several months ago. On Tuesday, the University of Hong Kong said Mrs. Lam’s popularity rating had fallen by more than 10 percentage points in the past two weeks to 33 percent, a historic low for the position of chief executive. Even some of Mrs. Lam’s allies in the territory’s pro-Beijing political establishment have joined calls for her to withdraw the bill.

The leader of the largest pro-establishment party, the Democratic Alliance for the Betterment and Progress of Hong Kong, said on Sunday that supporters of the extradition bill would not oppose the government if it gave in to the demands of the protesters and fully retracted the legislation.

The party’s leader, Starry Lee, when asked in a televised interview whether the party would support or agree with the government if it described the bill as withdrawn instead of suspended, said: “If the government believes that doing this would help repair society, I think we would support and understand.”

Demonstrators are wary of alienating the public

The protest movement, which has been largely leaderless, appeared to be weighing its desire to publicize its cause against concerns that acts of civil disobedience would alienate the residents of this financial hub known for its efficiency.

Last Friday, thousands of protesters, mostly teenagers and people in their 20s dressed in black, drew criticism after they surrounded police’s headquarters for 15 hours and filled the lobbies of at least two other government buildings, disrupting some services.

Dozens of protesters tried to repeat their blockade on Monday, preventing people from entering government buildings in central Hong Kong, in what they called a noncooperation campaign. Local television aired interviews with irate Hong Kong residents who were unable to pay their taxes or use other government services.

A day later, a handful of protesters turned up at the same site — this time, to apologize for inconveniencing the public.

And on Wednesday, the protesters took pains to keep their demonstrations orderly. They stayed on sidewalks, observed traffic lights, kept chanting to a minimum and focused their efforts on waving signs saying “Please Liberate Hong Kong” and handing over letters to embassy officials.

The protesters are most likely aware that Hong Kong residents could eventually tire of widespread civil disobedience, as many did during the Occupy Central protests that paralyzed commercial districts in the territory for weeks in 2014.

Keith Bradsher was the Hong Kong bureau chief of The New York Times from 2002 to 2016, and is now the Shanghai bureau chief. Follow him on Twitter: @KeithBradsher.