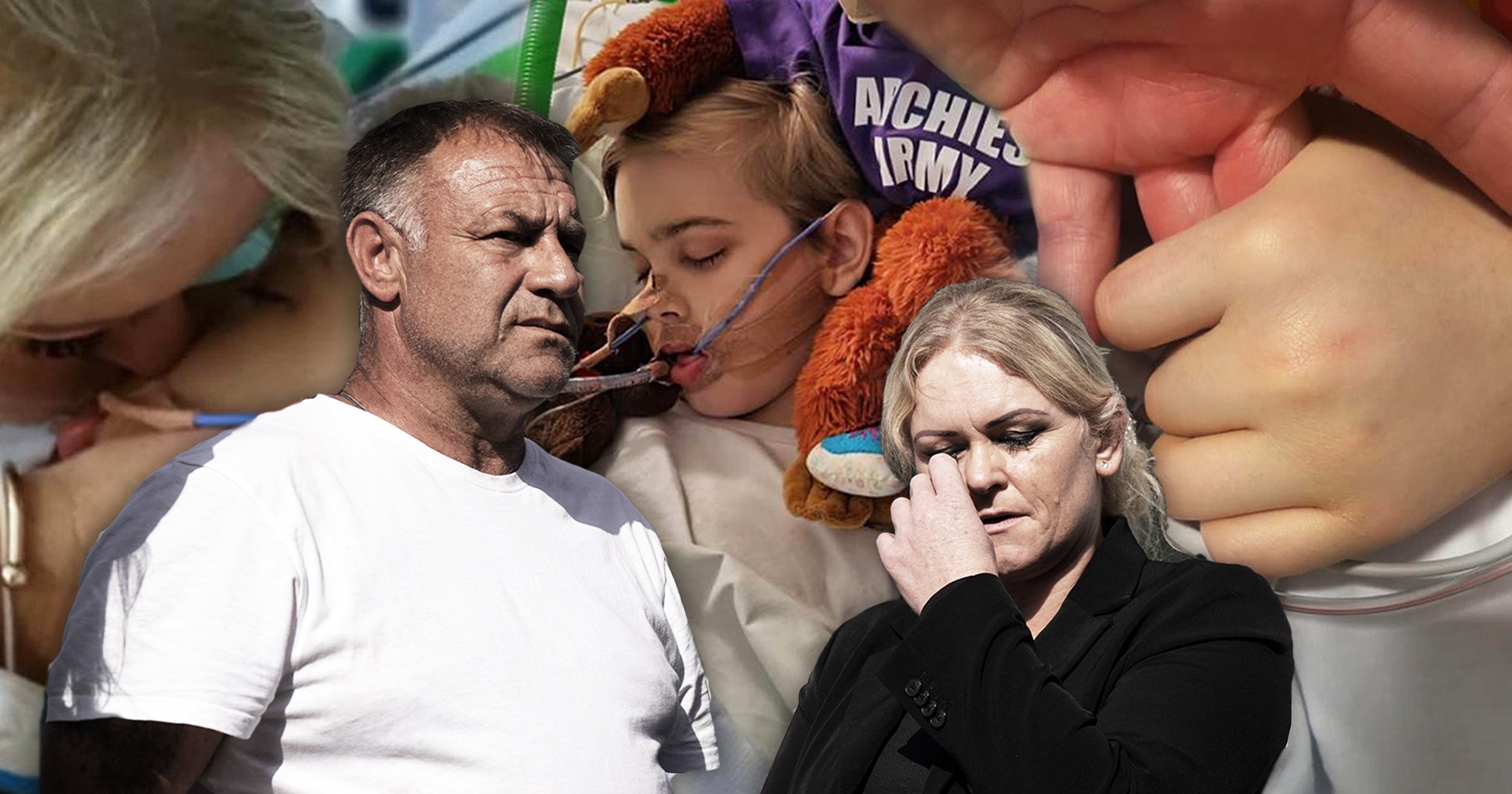 The family of Archie Battersbee has confirmed the 12-year-old has died following the withdrawal of life support.

The schoolboy was a fit and healthy aspiring gymnast until he was found unconscious at home on April 7 this year.

His mum, Hollie Dance, believes he was taking part in a dangerous online ‘blackout’ challenge.

Archie suffered a catastrophic brain injury and spent the past four months in a deep coma in hospital.

He was being kept alive by a combination of medical interventions, including ventilation and drug treatments after doctors declared him ‘brain-stem dead’.

It prompted a lengthy but ultimately failed legal battle by his family to continue his life support treatment in the hope the unconscious boy would recover.

Speaking after a last-ditch plea to the European Court of Human Rights to step in was rejected on Friday, Ms Dance insisted she had done everything she promised her son she would do.

Timeline in the case of 12-year-old Archie Battersbee

Archie is found unconscious by his mother, Hollie Dance, at her home in Southend, Essex. He has a ligature around his neck, prompting her to believe he was taking part in an online challenge gone wrong. The boy is taken to hospital with traumatic head injuries.

Barts Health NHS Trust, responsible for Archie’s care at the Royal London Hospital, begins High Court proceedings seeking to undertake a test of the brain stem – which is responsible for keeping people alive – and to withdraw mechanical ventilation.

Doctors think it ‘highly likely’ that the youngster is effectively dead, and say it is in his best interests that life-support treatment should stop. Archie’s parents, Hollie Dance and Paul Battersbee, raise concerns.

Two specialists attempt a nerve stimulation test on Archie, but no response is detected.

Mrs Justice Arbuthnot, sitting in the Family Division of the High Court, oversees three days of evidence and argument relating to Archie’s treatment. Doctors think it is ‘very likely’ he is ‘brain-stem dead’. Lawyers representing Archie’s family say his heart is still beating and want care to continue.

Mrs Justice Arbuthnot rules that Archie is dead and says doctors can lawfully stop treating him. Archie’s family say they plan to appeal.

Ms Dance and Mr Battersbee, are granted permission to appeal against the decision.

At the subsequent hearing, three appeal judges rule that evidence relating to what is in Archie’s best interests should be reconsidered by a different High Court judge. Archie’s parents say they are ‘delighted’ at the decision.

High Court judge Mr Justice Hayden hears evidence from doctors that continuing to treat Archie will only ‘delay the inevitable’. But the boy’s mother says her son is a ‘natural-born fighter’ and urges doctors to continue care.

Mr Justice Hayden rules in favour of the hospital trust, saying the medical evidence is ‘compelling and unanimous’ and paints a ‘bleak’ picture. He adds: ‘There can be no hope at all of recovery.’

Sir Andrew McFarlane, president of the Family Division of the High Court and the most senior family court judge in England and Wales, Lady Justice King and Lord Justice Peter Jackson are told during a two-day hearing that medical evidence shows Archie is in a ‘comatose state’.

The three Court of Appeal judges rule that doctors can lawfully stop providing life-support treatment to Archie. Again, the family announce plans to appeal to the European Court of Human Rights.

Archie’s family fail to persuade the Supreme Court to intervene in the case.

Undeterred, the family make a ‘last-ditch’ application to a UN committee to step in.

The hospital caring for Archie says his treatment is due to be withdrawn on August 1 at 2pm. However, it is confirmed that the Court of Appeal has granted a virtual hearing for 11am on August 1 after the UK Government asked it to ‘urgently consider’ a request from the UN committee to continue his treatment so the committee could examine his case.

The Court of Appeal rejects a request to postpone stopping Archie’s treatment. It says his life-support care will end at midday the following day.

Archie’s parents are refused permission to appeal against the latest ruling at the Supreme Court. Ms Dance says Barts Health NHS Trust will begin to withdraw Archie’s life support on August 3 at 11am unless the family have submitted an application to the European Court of Human Rights by 9am that day. The trust will not begin removing life-support until all legal issues have been resolved.

The European Court of Human Rights refuses the last-ditch application. Archie’s family say they intend to ask the High Court to allow the schoolboy to be moved to a hospice.

Nearly four months after Archie suffered traumatic head injuries, his parents formally lodge High Court proceedings over the move to hospice care – something the hospital opposes. Archie’s care continues. A hearing takes place at the Royal Courts of Justice in London, lasting late into the evening.

Mrs Justice Theis rules it is not in Archie’s best interests to be moved to a hospice. The High Court judge refuses the family permission to appeal against her ruling, granting a stay on the withdrawal of Archie’s treatment until 2pm on Friday to allow them to go directly to the Court of Appeal.

Refusing permission to appeal, the Court of Appeal judges say Mrs Justice Theis’ ruling dealt ‘comprehensively with each of the points raised on behalf of the parents’ and said the proposed appeal had ‘no prospect of success’.

Archie’s family is told his life support will be withdrawn at 10am on Saturday, campaign group Christian Concern says.

In an interview with Sky News, she described feeling ‘pretty broken’, saying the day had been ‘absolutely awful’.

Breaking down, she said: ‘The last however many weeks since April 7, I don’t think there’s been a day that hasn’t been awful really.’

Ms Dance added: ‘It’s been really hard. Despite the hard strong face and appearance obviously in front of the cameras up until now, I’ve been pretty broken.’

She said the hospital had made it clear there were no more options and that life support would be withdrawn at 10am on Saturday.

Asked if there was anything more she could do, Ms Dance said: ‘No. I’ve done everything that I promised my little boy I’d do. And I’ve done it.’

A spokesman with campaign group Christian Concern, which is supporting Archie’s family, said: ‘All legal routes have been exhausted.

‘The family are devastated and are spending precious time with Archie.’

The medics looking after Archie have not had a platform to explain their decisions, or the reasons behind them.

But the ‘bleak’ medical background to the case is set out in the court judgements which have been written up after each unsuccessful legal hearing.

On July 25, Sir Andrew McFarlane, President of the Family Division of the High Court, referred to a ‘short but devastating’ summary of the ‘all-embracing nature of the damage that has resulted from the original brain injury’ given by a consultant paediatric intensivist.

He wrote: ‘The description given is more, far, far more, than that of a boy who is simply “on a ventilator”.’

The judgement referred to a nurse who says none of the medical staff ‘witnessed any sign of spontaneous life’ in Archie during his time in hospital.

It said they found it ‘upsetting to look after someone who they know has an irreversible injury and sadly, every intervention feels futile’, and ‘all feel incredibly sad for this family’.

The ruling, which confirmed that doctors could lawfully stop providing life-support treatment to the schoolboy, went on: ‘Archie’s condition and the awful predicament that he and his family are in have achieved widespread Press and media publicity, much of which has included a photograph showing Archie as a most engaging boy.

‘Tragically, the consequence of the catastrophic brain injury that he sustained on the April 7 is that Archie is no longer the boy in the photograph.

‘He is, as the detailed description given by Mr Justice Hayden and confirmed in the short account of Nurse G demonstrate, someone whose every bodily function is now maintained by artificial means.’

In an interview with the Daily Mail, Ms Dance described having to deal with cruel social media trolls as well as the gruelling legal battle.

She said: ‘I’ve never lied about a thing. I’ve been open and honest about everything that has happened but it’s not enough for people.

‘I’ve been messaged to say Archie is “rotting” that he “should be six-feet under”. I’ve even had people say they will come to the hospital and take him off life support themselves.’

Ms Dance went on: ‘I know I’ve done a very good job being Archie’s mum. Based on my own childhood I was determined to be as good as a mother as I can possibly be and I feel like I have done that to the very best of my ability.’