Home » Americas » Trump’s Immigration Rhetoric Rallied the Base. But It Also Backfired

Trump’s Immigration Rhetoric Rallied the Base. But It Also Backfired

President Trump’s efforts to whip up fear around immigration in the closing days of the midterm cycle may have helped some Republicans clinch wins around the country.

But in places like the diverse Denver suburbs, it had the opposite effect.

“We are part of this country,” said Saad Salim, who fled Iraq with his family in 2005 and voted against Mike Coffman, a Republican congressman representing a swing district where nearly one in five residents is foreign-born.

Mr. Coffman had built ties to immigrant communities and tried to distance himself from Mr. Trump’s immigration policies, but on Election Day, immigrants in his district from El Salvador, Ghana, Burkina Faso and beyond said they wanted to send a message about those policies by voting against Republicans. Mr. Coffman, who had survived a number of Democratic challenges before, lost to his opponent, Jason Crow, by nine points.

In the final weeks of the campaign, Mr. Trump led the Republican Party in pumping out dark narratives about the dangers of illegal immigrants. Voter surveys and political analysts say the invective appeared to help Republicans hold the Senate. But it also backfired in places like Colorado and Kansas, where some moderate and highly educated conservatives felt alienated and broke to the left.

Voters who supported Republicans in the Senate races in Texas, Indiana and Missouri cited immigration as the most important issue facing the country, according to CNN exit polls. By contrast, Democratic voters were more concerned with health care, gun control and other issues.

In CNN’s poll of the Texas Senate election, 72 percent of voters who supported Ted Cruz, the Republican, said that immigration was a major issue, compared with 27 percent of the voters who backed his Democratic rival, Beto O’Rourke.

An election-eve survey of congressional battlegrounds by the polling firm Latino Decisions showed the differences spread across racial lines, as well as partisan splits. While black, Latino and Asian voters ranked border security among their lowest concerns, white voters were more worried about it than any other issue apart from health care. 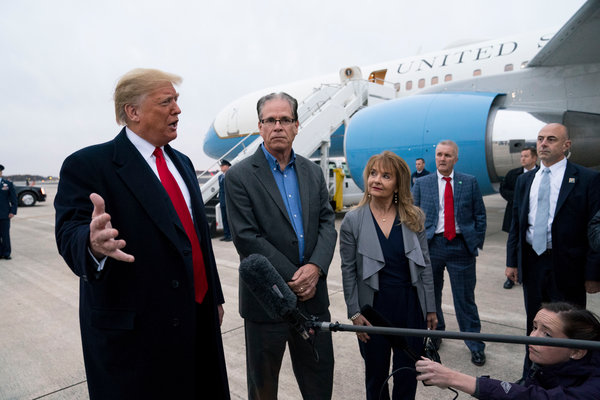 And in places where the president’s 11th-hour rollout of harsh proposals to fortify the border resonated with voters, a visit from the president himself appeared to close the deal for Republican candidates competing in tossup races for Senate in Arizona and Indiana.

Mr. Trump traveled to Indiana three times in the two months before Election Day, helping Mike Braun oust the incumbent Democrat, Joe Donnelly. During raucous rallies, Mr. Trump falsely claimed that the Democrats wanted to “invite caravan after caravan” of asylum seekers into the United States. He added, “A blue wave will equal a crime wave, and a red wave will equal law and safety.”

It was in Indiana where the president used his finger to draw in the air the middle initial of his predecessor, Barack Hussein Obama, in an apparent nod to “birtherism,” a conspiracy theory over Mr. Obama’s citizenship that Mr. Trump has fueled.

“It’s no surprise Joe Donnelly is holding a rally this weekend with Barack H. Obama,” Mr. Trump declared with the added emphasis.

Mr. Donnelly had been seen as especially vulnerable: The president won the state of Indiana by 19 points in 2016. Mr. Donnelly tried to protect himself by veering to the right on immigration, touting his support for a border wall and for increasing cooperation between the police and immigration authorities. Toward the end of his campaign, he began to call out the “radical left,” hoping to distance himself from the most liberal members of his party.

His attempts were not enough to satisfy voters. He lost to Mr. Braun on Tuesday by a sizable margin.

But there was a clear danger on Tuesday for Republicans running in moderate battlegrounds who relied too heavily on Mr. Trump’s immigration agenda.

In Virginia, Representative Dave Brat aligned himself with Mr. Trump on the border wall and travel ban, and on Tuesday he was narrowly defeated largely because of a backlash from suburban voters. In Pennsylvania, Scott Wagner ended his Republican bid for governor with a campaign ad warning voters that “a dangerous caravan of illegals careens to the border” and that the Democratic incumbent, Tom Wolf, was doing nothing to stop it. Mr. Wagner lost by nearly 17 points.

Some Republican candidates won in upset primary races by presenting themselves to voters in Mr. Trump’s image, only to be rejected in the midterms by the broader range of voters who turned out, many of whom felt alienated by the president’s harsh rhetoric.

Perhaps the starkest example was in Kansas, a deep red state, where Kris Kobach hoped to capitalize on a reputation he had built over decades as an immigration hard-liner and close ally of Mr. Trump.

During the George W. Bush administration, Mr. Kobach helped to create a system for tracking Muslims that was later dismantled by Mr. Obama. He also drafted controversial immigration laws in Arizona that were enforced by Sheriff Joe Arpaio, another friend of the president and the recipient of his first presidential pardon.

After investigating voter fraud by illegal immigrants in his own state, Mr. Kobach was appointed as vice chairman of Mr. Trump’s commission to investigate the issue on a national level. (Neither effort turned up evidence of fraud and the president’s commission was later dismantled.)

Mr. Trump endorsed Mr. Kobach in his campaign to replace the Republican incumbent governor of Kansas, Jeff Colyer. But voters rejected Mr. Kobach on Tuesday. In another race, they picked a Democratic challenger, Sharice Davids, to be the first Native American woman to serve in Congress. The state Republican Party had run ads suggesting that Ms. Davids supported illegal immigration.

“It’s just a total nightmare for them, completely driven by these hard-line policies,” said Todd Schulte, president of the pro-immigration group FWD.us. Mr. Schulte added, “The Republican Party committee spent a ton of money saying she was for open borders, and it just didn’t work.”

Within the country’s increasingly diverse suburbs, there was evidence that for many voters, Mr. Trump’s closing argument on immigration had gone too far.

Outside Denver, Alaa Shaker, 26, an Iraqi immigrant, said her fiancé had been stuck in Jordan for the past two years and that she had not been able to get him into the United States. She drew no distinction between Mr. Coffman and other Republicans on immigration.

Mr. Crow, the former Army ranger and first-time candidate who defeated Mr. Coffman in Colorado, said he wanted the House to hold hearings on the border separations of migrant families and what he called the “dangerous policies and very dangerous rhetoric coming out of this administration.”

As Moussa Kompoare, an immigrant from Burkina Faso, hustled out of his polling place in Aurora., Colo., he said he was sick of feeling maligned as a criminal in the national debate over immigration, and had voted straight Democratic on Tuesday. “They will fight for change,” he said.