Home » Americas » For George Bush, One Last Funeral, and Then a 70-Mile Train Ride

For George Bush, One Last Funeral, and Then a 70-Mile Train Ride

HOUSTON — Seven months ago, hundreds of people filled St. Martin’s Episcopal Church in Houston to say goodbye to Barbara Bush. On Thursday, they were preparing to return to St. Martin’s once more to remember her husband — the 41st president of the United States.

The funeral on Thursday morning for former President George Bush will be one of the final events in what has become an extraordinary moment of national mourning. The ceremony in Houston, held the day after Mr. Bush’s state funeral at Washington National Cathedral, will unfold at a church not far from the home he shared with his wife of 73 years, who died in April at the age of 92.

The Bushes both died at home, surrounded by relatives and close friends and mourned by members of both parties as embodiments of a more genial era of American politics.

After the funeral, scheduled for 10 a.m., Mr. Bush’s coffin was scheduled to travel by train in the afternoon to College Station, Tex., where the former president was to be buried on the grounds of the George H.W. Bush Presidential Library and Museum at Texas A&M University — next to Mrs. Bush and their daughter Robin, who died of leukemia at the age of 3 in 1953.

“You keep hearing people say it’s the end of an era, and in some ways that may be true,” said the couple’s pastor in Houston, the Rev. Russell J. Levenson Jr. “But in other ways, I think we’re being invited to consider his life as an invitation to continue that era. I realized, both for Barbara and for George, that in many ways they were just like everybody else, which is the way in which they lived their lives, and it’s the way in which they came to the end of life.”

Mr. Levenson is the rector of St. Martin’s, and was with both Mr. and Mrs. Bush as each passed away. 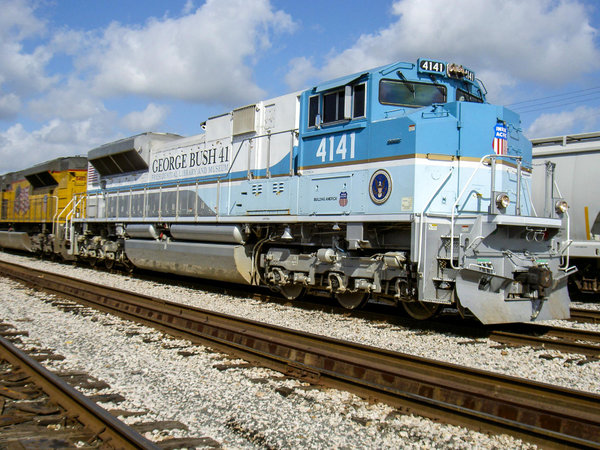 The back-to-back funerals and burials, months apart, signaled the closing of a chapter of Texas history, as the family whose name has become synonymous with the state’s politics marked the passing of its patriarch and matriarch.

Mr. Bush, a World War II aviator from the East Coast, came to Texas in the summer of 1948 to make a name for himself in the oil business, driving to the West Texas town of Odessa in a red two-door Studebaker. It was a fateful trip that would, in hindsight, shape Texas politics for decades to come. Mr. Bush would go on to become a local Republican Party leader in Houston, a Texas congressman and the 41st president. In more recent times, he was the father of a Texas governor and future president, George W. Bush, and the grandfather of the state’s land commissioner, George P. Bush.

Seventy years after that trip in the Studebaker, Mr. Bush’s funeral train will take him on one last journey through the state on Thursday, this time in a Union Pacific locomotive. The train, named Union Pacific 4141, will travel 70 miles through Magnolia, Navasota and other small towns, led by a 4,300-horsepower locomotive painted blue, gray and white in homage to the colors of Air Force One. Members of the Bush family will be on board.

Arranged for a man who had been America’s oldest living ex-president, Mr. Bush’s locomotive procession will give his long-planned memorial services a throwback touch, evoking the presidential funeral trains for Abraham Lincoln in 1865, Franklin Roosevelt in 1945 and Dwight Eisenhower in 1969. The train ride from his Houston funeral to his College Station burial was his idea, organizers said.

The train itself was unveiled in 2005. Mr. and Mrs. Bush toured it at an event held at Texas A&M, posing for pictures in which they peeked out of the window of the cab, above the side emblazoned with “4141.” Inside the cab, Union Pacific officials, including Mike Iden, then an engineering executive for the company, explained to Mr. Bush how the train operated.

“It was at that point that President Bush said, ‘Can I take this for a drive? Can I run it?’” Mr. Iden, now retired, recalled in a Union Pacific video. Mr. Bush, he said, climbed into the engineer’s seat and got a brief tutorial.

Then, for about two short miles, he took his funeral train out for a spin.