Home » Americas » N.Y. Today: Has the Mayor Lost His Focus?

N.Y. Today: Has the Mayor Lost His Focus?

[Want to get New York Today by email? Here's the sign-up.]

??Here are bars to avoid this weekend, also known as the official events listing for SantaCon 2018 in New York City.

Weather: More clouds, more cold, a high of 39, plus a chance of snow showers tonight.

Alternate-side parking: in effect until Saturday.

How hard is it to meet with Mayor de Blasio?

Mayor Bill de Blasio spends far less time at City Hall than he once did, leading some city officials to ask: Has he lost his focus? That was the subject of our front-page story on Wednesday. (You can read it here.)

The mayor “rarely meets with many of his commissioners” according to a review of his public schedules. (Read those here).

At times, Mr. de Blasio’s schedule is “making it difficult for department heads to advance new ideas at City Hall, or to inform the mayor about problems at their agencies,” The Times’s William Neuman reports.

Just ask Joe Esposito, commissioner of the Office of Emergency Management, whose firing this weekend took three days. Why? Because Mr. Esposito demanded to hear directly from the mayor.

This year through September, Mr. de Blasio averaged 10 days, according to his schedules.

“I have found it’s a very productive place to get work done,” he said. “City Hall is a wonderful place, I’ve spent a lot of my life there and I’m there on a regular basis, but it is a place filled with a lot of interruptions and distractions.”

He said the public should focus on results, not his governing style, and that the city is in strong shape.

Mayor or May-eh? A poll released Wednesday by Quinnipiac University found that only 43 percent of voters approve of his job performance, the lowest in more than two years.

The percentage of voters who say they don’t know or have no opinion of Mr. de Blasio is increasing — 17 percent in Wednesday’s poll, up from 6 percent in May.

Best of The Times 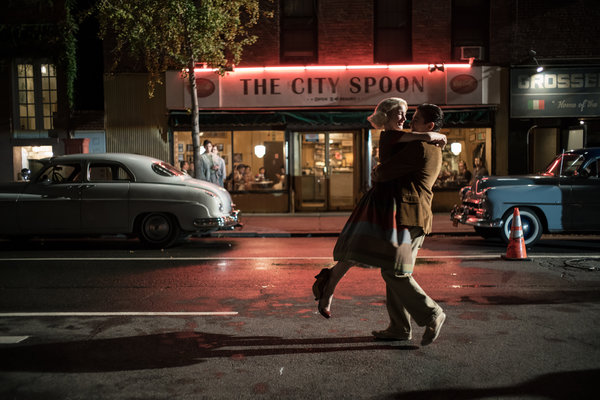 ‘I want to live like a human being’: A cutting-edge program to help mentally ill people live on their own has endangered those who were not ready.

‘I’ve Had One Hell of a Year’: That’s Harvey Weinstein, in an email he sent to friends criticizing police investigators.

How do they do that?: A photographer spent three days behind the scenes to find out how “The Marvelous Mrs. Maisel” recreates 1950s New York so well.

Underground and elevated: How smoking weed can save the city’s subways. No, seriously.

One Star: Our critic reviews Four Seasons, a restaurant that made history and is starting over at a new address. (One thing it hasn’t left behind is the trail of accusations against an owner.)

School connection: “My kid is a different person because of her daily interaction with a powerful teacher who looked like her,” a black mother in Brooklyn wrote. [Chalkbeat]

Weekend detour: For the next two years, the Path World Trade Center station will be closed on weekends.

In honor of the 30th anniversary of “Working Girl,” you can watch the classic Staten Island-centric film and get your hair teased ‘80s style at St. George Theater near the ferry terminal. 7 p.m. [Free]

A panel with prison reform advocates at the New School on the status of New York’s law that raised the age of criminal responsibility to 18. 9 a.m. [Free]

A discussion at the Schomburg Center about black athletes and their role in racial justice. 6:30 p.m. [Free]

A little after 10 o’clock on a rainy Friday, the back end of a small sedan lit up as it drove backward down 80th Street toward Madison Avenue. It did not seem unusual given the plethora of double-parked cars on the block.

Rather than straighten out and begin to drive forward, the car continued in reverse through the intersection. And then it turned right.

This was the rare part. Because Madison Avenue runs north, the only legal turn at 80th Street would be a left.

“There’s a car going the wrong way down Madison,” I said. “He might hit someone.”

The woman at the other end of the line said she would notify the local police precinct and that they would call me.

Three minutes later, the police called. Did I know where the car was?

Yes, I said, I was looking at it. It was in front of a hydrant facing the wrong way.

Had I gotten the license plate number?

The caller said they would “get the guy,” but I heard no sirens and saw no flashing lights, except those of the car lighting up storefronts as it slowly made a U-turn. The driver even stopped at the light.

Then it went on its way. As did I. As did the rest of the city.

Muslims have been in Brooklyn for a long time — there’s a mosque in Williamsburg that dates back to the 1920s.

Today, the Brooklyn Historical Society is releasing a collection of oral histories.

Here’s a snippet of what you’ll hear on the society’s Oral History Portal:

Su’ad Abdul-Khabeer, a professor at the University of Michigan, recalled celebrating Eid in Prospect Park in the summer when she was a kid. “The sun would be coming up and we’d be so excited,” she said, in an excerpt. (You can listen here).

Organizers say a year’s worth of activities, exhibits and educational programs are scheduled around the stories.

Asad Dandia, a founder of Muslims Giving Back and a plaintiff in a class-action suit against the Police Department over its surveillance tactics, also gives an oral history.

He recalled seeing a woman in the courtroom who brought a similar lawsuit decades earlier.

“The same activist who sued 30, 40 years ago was back here in solidarity with another community, for the same things and the same reason with the same judge,” Mr. Dandia said. “And so, it really showed me the fight goes on, and I’m part of that long trajectory.”

Make your Thursday your next great story.

New York Today is published weekdays at 6 a.m. Sign up here to get it by email. You can also find it at nytoday.com.