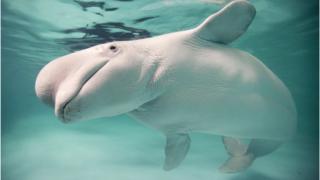 A cove off Canada’s east coast is the proposed site for a sanctuary where captive orca and beluga whales can retire.

The Whale Sanctuary Project has selected part of Nova Scotia’s coast as a spot for a seaside sanctuary, over other regions in Canada and the US.

The charity will be working with local municipalities to bring about eight whales to the region permanently.

It hopes to welcome its first cetaceans by the end of 2021.

The Whale Sanctuary Project looked at hundreds of possible locations off the coast of the Canadian provinces of British Columbia and Nova Scotia and the US state of Washington.

The organisation said Port Hilford, a seaside community about 200km (124 miles) from Halifax ,”offers an expansive area [cove] that can be netted off for the whales in a bay that’s open to the ocean but is sheltered from storms”.

The Whale Sanctuary Project was seeking a sheltered area with around 100 acres water – about a fifth the size of Monaco – with depths reaching 15 meters (50 feet).

It also had to have specific temperature ranges and water salinity, and protection from extreme weather, room for facilities needed to care for the animals, and place to host for educational activities.

Dr Lori Marino, president of the non-profit, said part of what helped them pick the spot after a two year search was the interest and engagement local communities had in the plan.

She hopes to see six to eight belugas, and possibly some orcas, permanently residing in the cove – cetaceans that have been born into and held in captivity and can’t be released fully into the wild.

Orcas and belugas are believed to suffer in captivity and there has been mounting pressure to end the practice.

In June, Canada passed what has been dubbed the “Free Willy” law, that bans whale and dolphin captivity except in the cases of rescues, rehabilitation, scientific research, or for the animal’s welfare.

Two belugas that retired in 2019 from showbiz in China were recently sent to live in a special sanctuary in Iceland, where more belugas may join them if they thrive.

The Whale Sanctuary Project will be working with the town of Sherbrooke and the Municipality of the District of St Mary’s on the project’s development.

Next steps will be work with the communities to finalise the vision for the whale sanctuary and to begin the regulatory processes, the group said.

The Baltimore National Aquarium is also looking for a site to create a sanctuary for their Atlantic bottlenose dolphin colony.