Home » Middle East » How is Iran responding to the coronavirus outbreak?

How is Iran responding to the coronavirus outbreak? 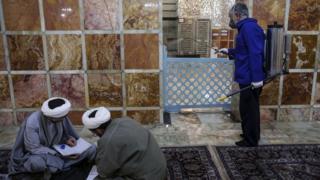 Iran has a growing number of coronavirus cases and there is concern about how the government is responding.

With the help of our colleagues in BBC Persian, we’ve been trying to piece together what is happening in Iran.

How many have been infected?

The Iranian government on Wednesday said 19 people have died so far and 139 people have been infected, but the true number is expected to be much higher.

A World Health Organization (WHO) team will travel to Iran this weekend to evaluate the situation and provide support.

Have quarantine restrictions been imposed?

Iranian President Hassan Rouhani says there are no plans to quarantine entire cities and towns.

Iran's President Rouhani says "We have no plan to quarantine any district or any city. We only quarantine individuals." #coronavirus #COVID19

In Qom, the city at the centre of the outbreak, religious shrines are still open.

The most revered, the Hazrat Masumeh shrine, is visited by millions of Shia Muslim pilgrims every year from all over the world.

People have been advised to avoid unnecessary gatherings, and asked not to travel to Qom, but there is no outright closure of religious sites in the city.

The custodian of the Hazrat Masumeh shrine has said that people see it as a source of recovery and healing so it cannot be shut down.

“Shutting the shrines would be a huge step for the clerics and not one that they would be likely to take unless they come under international pressure,” says Rana Rahimpour, of BBC Persian.

Police in Tehran have banned the use of shisha water pipes in coffee shops and tea houses across the city. These pipes are often smoked communally and passed from person to person.

In affected provinces schools and universities have been closed and sports matches, gallery openings and film premieres cancelled.

A further 118 internet users were “talked to and let go” with warnings, the head of Iran’s cyberpolice force Vahid Majid said.

Does Iran have enough medical equipment?

The WHO is supplying Iran with diagnostic kits and protective equipment for healthcare workers.

A spokesperson at the Iranian ministry of health said the WHO had sent four shipments so far.

Many Iranians are worried about a lack of equipment.

An Iranian medical importer has said he is unable to purchase testing kits due to US-imposed sanctions, according to local reports.

“Many international companies are ready to supply Iran with coronavirus test kits, but we can’t send them money,” said Ramin Fallah, a board member of Iran’s Association of Medical Equipment Importers was quoted as saying by the Ilna news agency.

The US has denied that its sanctions are restricting Iran’s ability to import medical supplies, pointing to an exemption for humanitarian goods. But Iran says companies find it difficult to process payments with banks unwilling to risk breaking US rules and risk sanctions themselves.

What about face masks?

As in other countries with outbreaks, Iranians have been queuing up at pharmacies to purchase medical masks as well as disinfectant gels and sprays.

Prices of these products, where they’re available at all, have gone up by as much as 10 times.

Some on social media have claimed the reason behind the lack of availability of masks is due to the fact that millions were donated to China a few weeks ago.

According to the state-run Irna news agency, Iran donated three million face masks to China “as sign of long-term and traditional friendship between two countries”.

Local reports also suggest Chinese companies have been purchasing huge quantities of masks from Iran creating a shortage in the domestic market.

The Iranian government has now said it has banned the export of face masks for three months and ordered factories to ramp up production.

More on the coronavirus outbreak

Are people leaving the country?

Iran has not banned foreign travel but countries including neighbouring Turkey, Pakistan and Iraq, have closed their borders.

Turkey and United Arab Emirates have suspended flights from Iran.

These are important destinations for non-oil exports and Iran’s economy could suffer as a result.

The Iranian government said flights to China were suspended on 2 February.

However, flight records suggest there have been at least nine flights between Iran and China since then.