A Crackdown in Ann Arbor 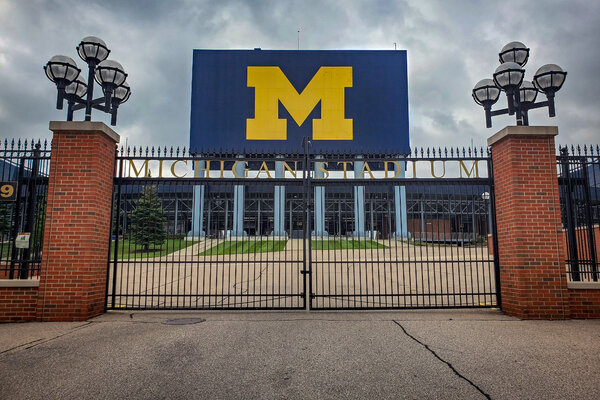 On Tuesday, local health officials ordered students at the University of Michigan to stay in their residences — effective immediately — in an effort to control an escalating campus outbreak.

Cases and positivity test rates have recently spiked in Ann Arbor, which had largely dodged the worst of the pandemic. Since Oct. 12, cases associated with the university have comprised 61 percent of more than 600 confirmed and probable local infections, according to Jimena Loveluck, the health officer for Washtenaw County, which encompasses Ann Arbor and the university.

“Most of the cases on our campus can be traced back to small- and medium-size gatherings without appropriate face coverings and social distancing,” university leadership said in an emailed statement to students and staff members.

The stay-in-place order, which applies to all undergraduate students through Nov. 3, has quite a few exceptions. Students who are not showing symptoms of Covid-19 can still attend in-person class, play varsity sports and get medical care. They can also access university dining services and exercise in pairs outside.

Health officials say those activities have not been problematic. It’s socializing without precautions that has fueled the outbreak.

“During the day, on campus, everyone’s fine and following the rules,” said Emma Stein, 21, a senior news editor for The Michigan Daily, the student paper. “But at night, on weekends, they don’t.”

Although the restrictions do not constitute a quarantine, the health department may start issuing fines for violations, Ms. Loveluck said. That’s especially important in advance of Oct. 31, which was shaping up to be a big party weekend to celebrate the season’s first home football game against rival Michigan State.

“We’ve needed this for a long time,” one student told The Detroit Free Press. “Right now, we’re the university who chose football over the safety and well-being of not only us the students, but every single person who comes into contact with us.”

In Ann Arbor, students and faculty have criticized the university for its reopening plan, which did not include widespread testing for asymptomatic students until today. Other colleges have relied on extensive, mandatory testing to keep cases down, since asymptomatic people are often contagious.

A few weeks ago, Ms. Stein, the senior, drove to an urgent care center in another town to get a routine test. She and her friends didn’t even think to go through the university health system. “We wouldn’t qualify,” she said, “so we just drove.”

“This was all too predictable,” said Nicholas Bagley, a law professor at the university who consulted on Gov. Gretchen Whitmer’s coronavirus response. “The reopening plans of colleges and universities across the country have been built on hopes and prayers, not on a rigorous plan to actually identify asymptomatic cases and isolate them from the rest of the community.”