The razor wire cuts the man’s face and blood trickles down his jawline. More noticeable, however, are the screams of the children. It’s a cold late December morning near Yuma, Arizona, and smugglers had led dozens of asylum seekers to a breached part of the border wall that traverses a canal into the U.S.

The blades of the concertina wire ensnare shirts and jackets of asylum seekers who are dunked into the 55 degree water, wading through the drainage ditch just yards from the San Juan del Rio Colorado border crossing. One cannot easily make out faces, only wet fists gripping the steel slats and the piercing screams of children. On the other side, U.S. Border Patrol agents are filming and shouting in Spanish, “Go back…don’t do this. Look at the child! Hey! Be careful with the child! Be careful with the child!”

ABC News obtained video showing the chaos and complexities faced by authorities and asylum seekers in the growing border crisis. According to federal authorities, a million asylum seekers and migrants are forecast to cross into the U.S. during the 2019 fiscal year, the majority of them families with children traveling from Central America, like the ones seen in this video.

President Donald Trump has threatened to shut down all or parts of the 2,000-mile long U.S. border with Mexico, accusing Mexico of doing too little to stop the record flow of asylum-seeking families and unaccompanied minors into the U.S. 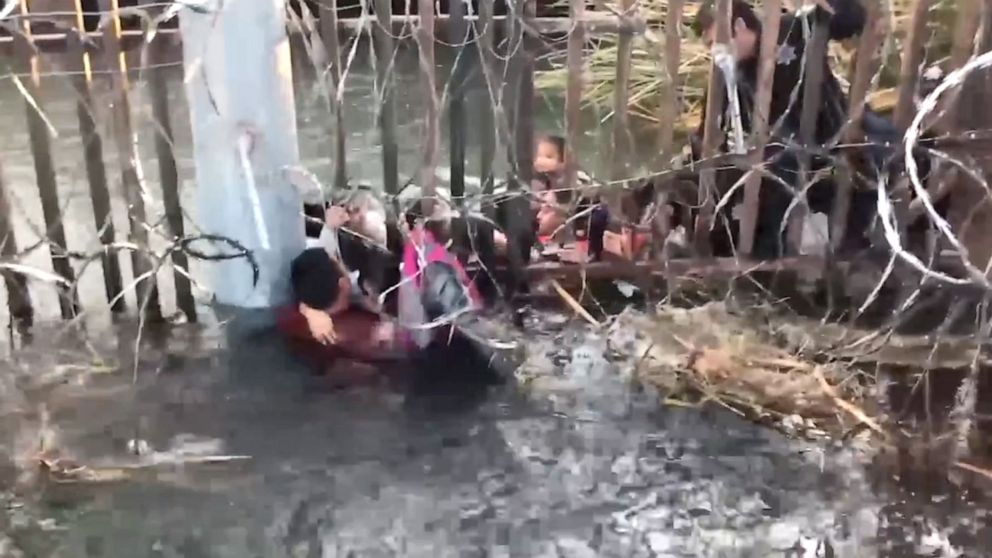 This video shows three Mexican police officers intervening that December morning. The first wades into the water, moving his way toward the screaming children. Another is edging his way along the bottom of the border fence toward the hole through which the asylum seekers went under and through.

The man with the cut, in a burgundy shirt, carries a screaming child to the bank.

Border agents can be heard yelling at the women: “You’re going to traumatize this poor child. She’s crying, if she crosses the child can drown.”

The Mexican police beseech one of the Honduran children not to go through. A female Mexican officer yanks a child out of a mother’s arms and takes her up the bank on the Mexican side.

The officers on both sides are unsure which children belong to which adults. Their own calls and directions are pierced by the cries of children.

The Mexican officer edging his way toward the hole finally jumps in, blocking it with his body. No one else can come through. But there’s a woman who has just crossed. The Mexican officers and the Border Patrol agents erroneously believe she is one of the children’s mothers. The woman hesitates, hands over mouth, deliberating between rejoining her sister’s family on the Mexican side or making an asylum claim in the U.S.

CBP officials later told ABC News they have not been able to find the woman in their records despite having processed her and taken her asylum application. But her sister, who remained on the Mexican side of the border with her two children, later went to a Mexican migrant shelter where she spent Christmas night. The following day they left. Like many asylum seekers, they didn’t say where they were going.