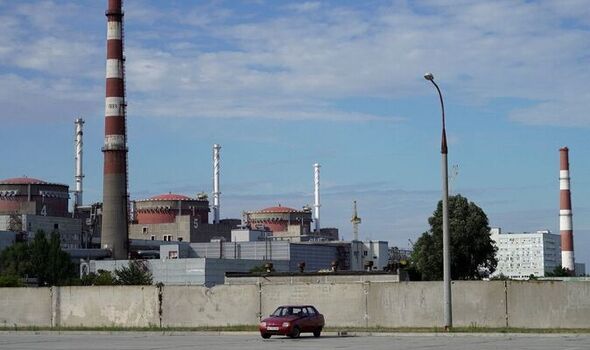 The emergency inspection was carried out on Monday after the facility, the biggest in Europe, was shelled more than a dozen times.

Blasts damaged buildings and equipment, though none caused a “critical” risk for nuclear safety and security, the International Atomic Energy Agency said.

Both Russia and Ukraine blamed each other for the shelling.

The site is currently being operated by its usual Ukrainian staff but under Russian control.

Rafael Grossi, head of the International Atomic Energy Agency (IAEA) nuclear watchdog, said whoever was behind the bombardment was “playing with fire”.

And he warned, “it must stop immediately”. Mr Grossi added: “Even though there was no direct impact on key nuclear safety and security systems, the shelling came dangerously close to them.

“We are talking metres, not kilometres. Whoever is shelling, is taking huge risks and gambling with many lives.” An IAEA statement later confirmed: “Repeated shelling damaged buildings, systems and equipment, with some of the explosions occurring near the reactors.”

The agency said the plant was hit with “more than a dozen blasts within 40 minutes” though radiation levels at the site remained normal and there were no reports of casualties. External power supplies, which have been knocked out several times during the conflict, were also not affected.

According to the nuclear watchdog’s experts, site management reported damage in several places, including a radioactive waste and storage building, cooling pond sprinkler systems, an electrical cable to a reactor, condensate storage tanks, and to a bridge between another reactor and its auxiliary buildings.

The IAEA’s inspection team will report back within the next few days.

The surge is aimed at exhausting Kyiv’s air-defence supplies, one Pentagon official said. President Zelensky added: “Although there are fewer attacks today due to the deterioration of the weather, the number of Russian shelling occasions remains, unfortunately, extremely high.”