The Israeli-Palestinian conflict is changed forever by this war

After the shooting war over Gaza wound down early Friday, it seems that the Israelis and Palestinians may be poised to return to their fragile, if febrile, status quo. Israeli officials are already claiming their military objectives were met after close to two weeks of relentless bombardment of the blockaded Gaza Strip.

After firing more than 4,000 rockets into Israeli territory, the Islamist group Hamas, which rules the Gaza Strip, may also declare a kind of victory. It is likely to emerge from the fighting as it has after previous rounds, battered but unbowed, and perhaps boosted in the eyes of some of its brethren for having confronted an Israeli state that maintains an unflinching occupation over millions of Palestinians. Never mind the hundreds of Palestinians and dozen people in Israel who lost their lives in the process. 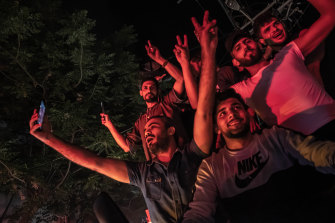 Palestinians celebrate the ceasefire agreement between Israel and Hamas on May 21, 2021 in Gaza City, Gaza. Credit:Getty Images Europe

Yet to many analysts and close observers of the Israeli-Palestinian conflict, there may be no going back to the way things once were. The intensity of this latest round of violence took both the Israeli government and the Biden administration by surprise. It should not have.

The coals were stoked far from Gaza, by the provocations of Israeli police and emboldened Jewish far-right vigilantes marching through Jerusalem. Palestinian protests against planned evictions in the contested holy city and the clashes that ensued all came to a head when Israeli security forces decided to storm al-Aqsa Mosque. Hamas then saw an opportunity to don the mantle of the defender of the third-holiest site in Islam, as well as broader Palestinian claims to Jerusalem, and launched its attacks. The resulting war sprawled across the land between the river and the sea, with clashes in the West Bank as well as between Arab and Jewish Israelis in cities inside Israel’s 1967 borders.

The explosion of tensions exposed the internal dysfunctions among both the Israeli and Palestinian political camps. For the former, two years of ceaseless electioneering and the failure to form a stable ruling coalition either with or without Prime Minister Benjamin Netanyahu weakened governance and has brought far-right groups once considered too extremist into the political mainstream. For the latter, a crisis of legitimacy facing the beleaguered Palestinian Authority and its ageing President Mahmoud Abbas has only intensified. Hamas’s renewed militancy followed a decision by Abbas to scrap the first planned Palestinian elections after more than a decade and a half.

Israeli and US officials may tout the return of calm after a ceasefire, but experts fear the opposite. There is no meaningful dialogue between an unpopular, enfeebled PA and a right-wing Israeli government where many politicians now openly reject the idea of an independent Palestinian state. Israel’s entrenched system of control over the Palestinian territories and its creeping annexation of Palestinian lands, unchecked for years by the United States, may only provoke more angry resistance.

“Given Israeli efforts to marginalise Abbas and the PA, it will not be easy to keep the West Bank out of the next conflict or even the current one,” wrote Khalil Shikaki, a Palestinian political analyst and pollster. “Security coordination between Israel and the PA will not be enough to contain the rising flames. And given the rhetoric around annexation, no right-wing Israeli government will be willing or able to renew a political process that would require negotiations with the PA leadership, even for small incremental steps.”

This state of affairs was a long time coming. In a recent survey of US-based Middle East scholars, a majority now viewed the two-state solution as an impossibility. The population of Jewish settlers in the West Bank and East Jerusalem – where a Palestinian state is supposed to emerge – has grown sevenfold since the 1990s. Once on the fringes of Israeli politics, the settler movement now makes up the vanguard of the Israeli right. And, like its US allies in the Republican Party, the Israeli right has no interest in pursuing the two-state goals enshrined by the Oslo accords in 1993.

“The official Israeli abandonment of negotiated compromise, alongside continued settlement expansion and the forcible relocation of Palestinian families in East Jerusalem and communities in the West Bank, made a new crisis almost inevitable,” wrote Tamara Cofman Wittes, a senior fellow at the Brookings Institution. “It made inescapably obvious what was already clear to many: that the Oslo framework was exhausted, and the rationale for the prevailing order in the West Bank, including the existence of the Palestinian Authority, was defunct.” 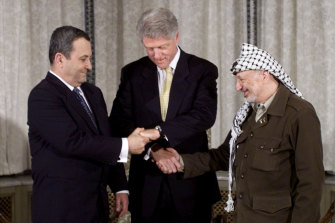 Now, a growing number of dignitaries and diplomats who staked their careers on building two states recognise that the facts on the ground make it a fantasy. “The Oslo framework is done, it’s over,” said Marwan Muasher, a former Jordanian diplomat and politician who played a lead role in the Arab Peace Initiative two decades ago, at a virtual event hosted by the Carnegie Endowment for International Peace on Wednesday. “I’m a two-stater by training. I’m a one-stater by reality.”

Other veterans of the post-Oslo era who participated in the same event were less emphatic. Tzipi Livni, a former Israeli foreign minister, hoped “pragmatic moderates” on both sides could revive the peace process. In current circumstances, that seems more a wish than a solution.

Daniel Kurtzer, a former US ambassador to Israel, insisted that the two-state solution remained the only policy goal worth striving for – preferable to a single bi-national state, or an Israeli-Palestinian confederation where Jerusalem is shared, or other mooted arrangements. “Anybody who has analysed alternatives to a two-state solution knows that none of them work,” he said.

“Let’s make the rights the central argument for people,” Muasher countered, pointing to an evolving conversation within the Palestinian movement and abroad, including among US Democrats, where the focus is shifting away from the Palestinians’ lack of statehood to their lack of equal rights within Israel. “Let’s keep talking about the shape of a solution, but ignoring the rights of the people is not sustainable.”

Palestinians themselves are trying to make that last point clear. A mass general strike this week saw the joint participation of Arab Israelis – almost all of whom see themselves as Palestinians – and Palestinians in the West Bank, East Jerusalem and Gaza. Analysts of the Palestinian scene see the glimmers of a new era of mobilisation.

“First, the quiescence of the Palestinian people – accused, often most forcefully from within their own communities, of apathy and indifference – never amounted to acceptance of defeat. They have shown that Israel cannot persist in its policies without paying a price,” wrote Tareq Baconi in the London Review of Books. “Second, regardless of whether a broader movement emerges out of the current moment, the collective eruption across historical Palestine shows that the Palestinians remain a people, despite the false hope of partition, the all-too-real separation of their territories, and the deep fragmentation of their political and social life.” 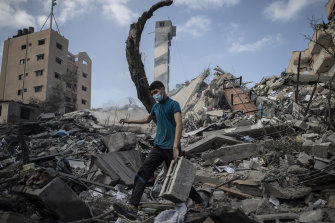 A Palestinian man inspects the damage after a six-storey building was destroyed by an Israeli air strike in Gaza.Credit:AP

“For years, Israelis have made peace with the notion that they can manage, however brutally, their relationship with Palestinians instead of resolving it,” wrote Yousef Munayyer in The New York Times. “This has been aided by a process of walling off the ugliness of their rule: Gaza, caged and besieged, might as well have been on a different planet; Israelis could drive throughout the West Bank practically uninterrupted by the sight of Palestinians; Palestinian citizens of Israel have largely been relegated to neglected, concentrated areas.”

But, Munayyer added, the unrest and mass protests have confronted Israelis with a new reality: “Palestine is not ‘over there’ but is everywhere around them.”