Rishi Sunak's dishes will last until the autumn

Some of Britain’s most popular restaurants are set to keep offering cut-price meals into the autumn after celebrating an ‘incredible’ boost from Rishi Sunak’s scheme.

Diners last week queued outside pubs and restaurants to take advantage of the Chancellor’s Eat Out To Help Out deal, which offers 50 per cent off meals and non-alcoholic drinks up to a maximum of £10 per head between Mondays and Wednesdays in August.

Former Pizza Express chief executive David Page, who runs the hugely popular Franco Manca pizza chain and The Real Greek restaurants, said sales at his 64 sites soared by up to 48 per cent last week – and revealed he is now planning to carry on offering discounts after the Government scheme closes at the end of the month. 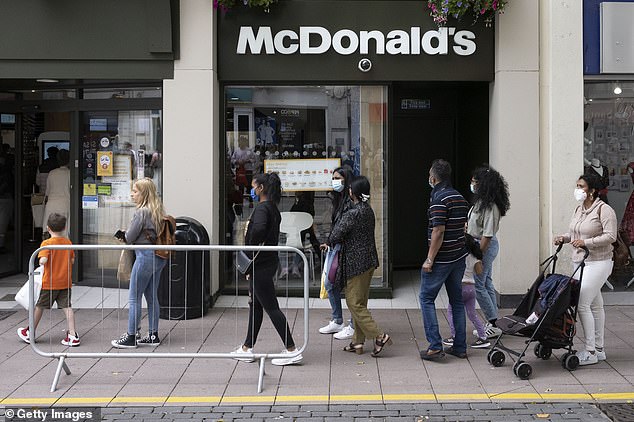 He told The Mail on Sunday: ‘If Rishi extends Eat Out To Help Out that would be great, but if he doesn’t we are thinking of doing something ourselves early in the week to boost trade.’

He added: ‘The last three days have been the most incredible I have ever known. I have never been in a business that has effectively put on 50 per cent more customers in a week.’

The surge in demand has allowed Mr Page to take all of his 1,100 restaurant staff off furlough – and he is now hiring 60 more and opening a new Franco Manca near London’s Waterloo Station next month.

The Qoot restaurant group, which is opening a new Lebanese Bakery in Harrods next month, also plans to extend cut-price deals at its own cost in September after sales jumped 47 per cent compared to the previous week at its six London sites participating in the scheme. Scot Turner, Qoot’s vice-president of operations, said extending discounts would help the firm ‘play its part’ in encouraging people to return to city centres, where pubs and restaurants are in crisis as more than two-thirds of office staff continue to work remotely.

In a sign of recovery, a Government survey which was published on Friday showed that 21 per cent of adults who left their homes said that they visited a cafe, pub or restaurant, up from ten per cent three weeks ago.

Mr Turner said: ‘It is vital the footfall comes back. If people don’t come back to restaurants, a huge workforce is at risk.’

The Treasury has invested £500 million in the Eat Out To Help Out scheme to encourage Britons to boost the economy and wean hospitality employees off furlough. It has been taken up by 72,000 restaurants across the UK, from Michelin-starred venues to chains such as Wagamama, Pizza Express, Burger King and Yo! Sushi.

Mandarins told: Use the office – or lose it

Civil servants who are refusing to work in Whitehall have been warned that their offices will be requisitioned if they don’t head back to their desks soon – with cheaper offices outside the capital becoming their new base.

It was reported last week that just one in 20 officials had returned to Westminster. Now a Government source has said that No 10 is looking at ripping up the traditional models of working, with a significant proportion of civil servants either working from home or being sent to new satellite offices in Cardiff or York.

The source said: ‘Use it or lose it. Most of the departments are standing empty, which is a complete waste. Soon you can expect just the main departments – Cabinet Office, Treasury, Foreign Office and the MoD – to still be self-contained London offices.’

Boris Johnson had earmarked last week for workers to accelerate a return to work. But most Whitehall offices were said to resemble the ghost ship the Mary Celeste.