The mayor of Portland, whose city has been plagued by protests for months, has accused US President Donald Trump of escalating tensions that last night led to a fatal shooting of a man affiliated with a right-wing group.

On Saturday night (US time) a man was shot and killed in Portland, Oregon, after a large caravan of Trump supporters clashed with protesters, in the latest sign of divisions flaring in the lead up to November’s presidential election. 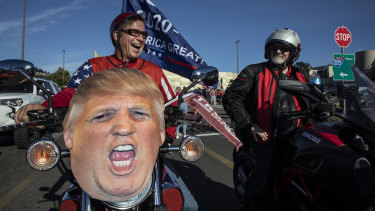 Supporters of President Donald Trump take part in the rally and car parade from Clackamas to Portland that ended in clashes with Black Lives Matter activists.Credit:AP

The president weighed in by retweeting a series of posts denigrating Portland’s Democratic Mayor Ted Wheeler, who has been a vocal opponent of Trump's push to send federal troops into Democratic cities as part of his law and order agenda.

But on Sunday afternoon, Wheeler hit back during an incendiary press conference in which he blasted the President and blamed him for inciting his base to cause trouble.

“Yesterday's events began with hundreds of cars filled with supporters of the president rallying in Clackamas County and then driving through downtown Portland. They were supported and energised by the President himself,” said Wheeler.

"You've tried to divide us more than any other figure in modern history and now, you want me to stop the violence that you helped create? What America needs is for you to be stopped so that we can come back together as one America." 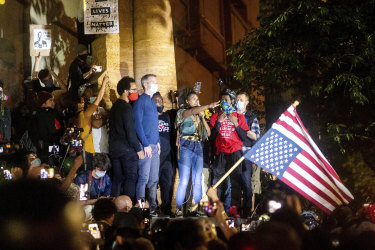 “Do you seriously wonder, Mr President, why this is the first time in decades that America has seen this level of violence?”

Trump hit back in real time, tweeting in the middle of Wheeler’s press conference that Portland would never recover with a “wacky Radical Left Do Nothing Democrat Mayor” in office.

“The only way you will stop the violence in the high crime Democrat run cities is through strength!” he said.

Meanwhile, Democratic presidential nominee Joe Biden condemned the violence across America, and challenged Trump to do the same. 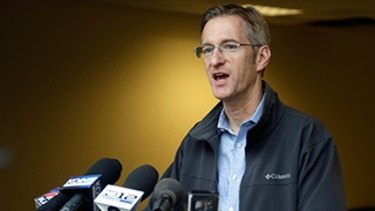 “It does not matter if you find the political views of your opponents abhorrent, any loss of life is a tragedy,” Biden said.

The protests in Portland began peacefully in the aftermath of George Floyd’s death on May 25, but soon became hijacked by disparate groups.

In July, after some protesters stormed the federal justice centre in downtown Portland, agents from the Department of Homeland Security were sent in, without the consent of Wheeler or Democratic Governor Kate Brown. Divisions, both politically and on the ground, intensified immediately.

Much of the details are still emerging, as the suspect is still at large, and the identity of the victim – who was wearing a hat with the insignia of far-right group Patriot Prayer – has not been released.

However, the shooting also took place on a night that pro-Trump rally drew hundreds of trucks full of supporters into downtown Portland.

Videos taken last night show pro-Trump supporters using mace and paintball guns against racial justice demonstrators as they drive through the streets in a convoy. Protesters threw objects back at them.

Wheeler is now under significant pressure as he faces re-election, having repeatedly resisted allowing federal troops to come into Portland to quell the violence.

In his press conference, the mayor accepted that he, like the president, should be held accountable, but pointed to other measures he'd taken, such as a "19-point plan" centred around reforming policing and reinvesting in community services.

The most important news, analysis and insights delivered to your inbox at the start and end of each day. Sign up to The Sydney Morning Herald’s newsletter here,  The Age’s newsletter here, Brisbane Times‘ here and WAtoday‘s here.