Poroshenko was elected in 2014 after mass protests forced out former president Viktor Yanukovich. 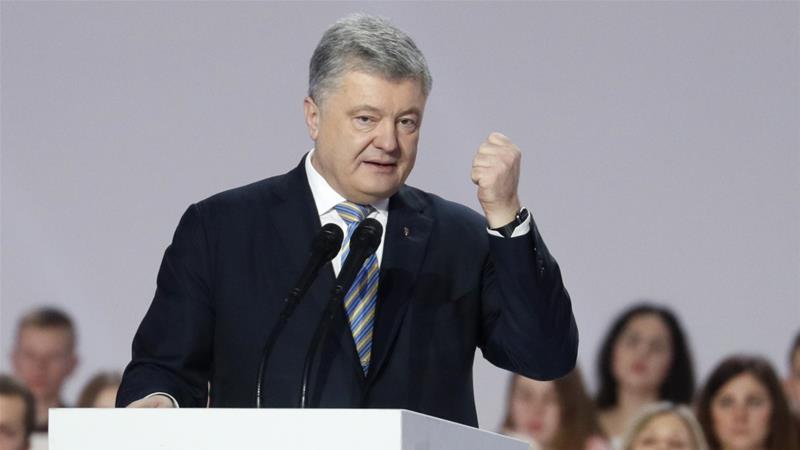 Ukraine’s President Petro Poroshenko will run for a second term in office in the upcoming elections scheduled to take place in April.

The 53-year-old, a confectionary magnate and one of Ukraine’s richest men, told thousands of supporters that one of his main priorities would be for Ukraine to join the European Union.

“The feeling of deep responsibility before the country, before contemporaries, before past and future generations prompted me to decide to run again for the presidency,” the pro-EU and pro-NATO candidate said.

If Poroshenko is able to implement his plans, Ukraine will apply to join the EU in 2024 and a special court to try corruption cases would be up and running this year.

Poroshenko came to power in the 2014 elections after mass protests forced out former president Viktor Yanukovich.

However, he has lost popularity because of his inability to combat corruption and stop the war in the eastern Donbas region, which has claimed more than 10,000 lives.

Poroshenko, however, may be a more predictable option for investors than his nearest challengers such as former Prime Minister Yulia Tymoshenko or Volodymyr Zelenskiy, a political novice who achieved fame as a comic actor.

Tymoshenko, the frontrunner, wants to cut gas prices for households, which may set her on a collision course with the International Monetary Fund (IMF) and other foreign backers who pumped billions into Ukraine to keep its war-scarred economy afloat.

In late 2013, Moscow-backed Yanukovich sparked massive protests when he refused, at the last minute, to sign an association accord forging closer ties between Ukraine and the European Union.

Last week, Yanukovich was sentenced to 13 years in prison for committing treason when he attempted to quash the popular uprising.

Yanukovich was charged with high treason for asking Putin to send Russian troops to Ukraine after he fled the ex-Soviet country.

Moscow annexed Ukraine’s Crimea Peninsula in 2014 and supported an uprising by Russian-speaking separatists in the east of the ex-Soviet country.