Joe Biden and the First Family are enjoying a sumptuous summer getaway on a secluded island thanks to a big money Democrat donor who has had the ear of Presidents and VIPs, DailyMail.com can exclusively reveal.

The President and disgraced son Hunter are staying for free at a sprawling beachfront estate in Kiawah Island, an exclusive beach resort and gated community on the South Carolina coast.

Allwin, who has homes in Connecticut and Manhattan, shares Aetos Captial with her son Christopher Allwin – an asset management firm with $11.31 billion under management.

In a span of just five years, from 2014-18, her family’s foundation donated $1.9 million to charitable causes.

An administrator at Manhattan’s exclusive Trevor Day School, she has backed a string of prominent Democrats down the years including Barack Obama, Hillary Clinton and Vice President Kamala Harris.

She’s also attended multiple DNC fundraisers and made three trips to the White House, meeting twice with Obama in 2014 and attending a reception thrown by Biden at the Vice President’s Residence in 2013.

Indeed one such meeting with Obama on April 4, 2014, was deemed so important that it was arranged just a few hours in advance, according to White House visitor logs.

The First Family flew into Kiawah Island on Wednesday and were whisked to Allwin’s 10,500 square foot property amid tight security to begin their week-long vacation. 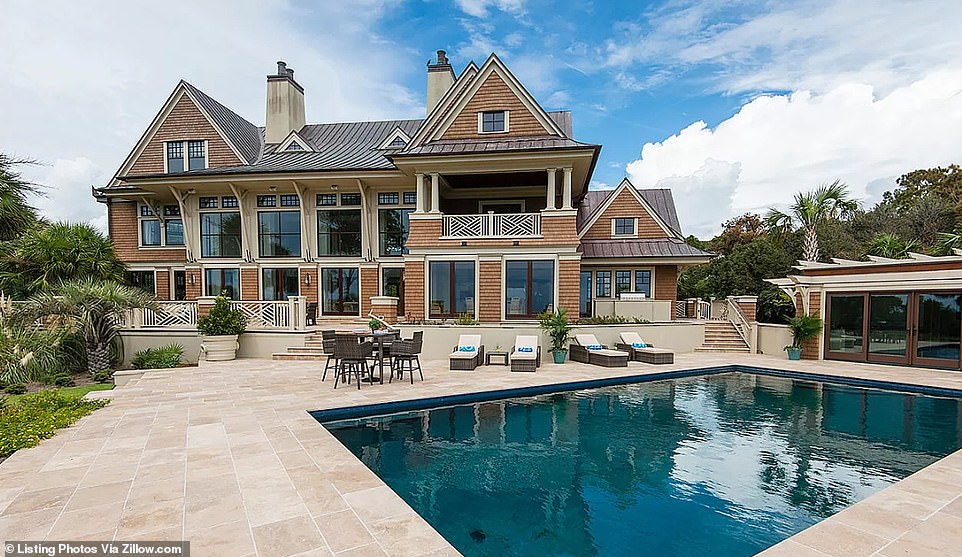 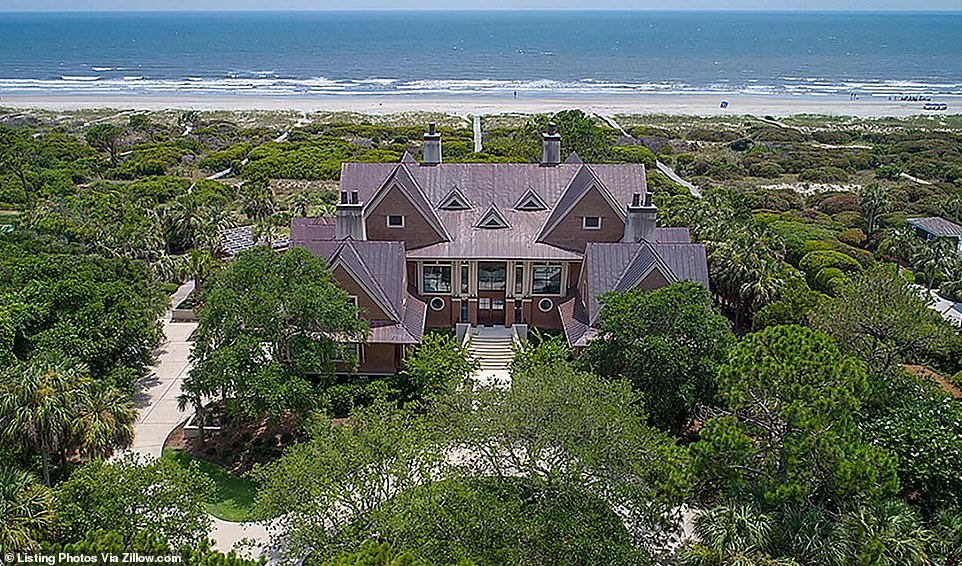 The secluded oceanfront property is owned by Democrat donor Maria Allwin: the Bidens have stayed there several times before, dating back to 2009

Secret Service agents were seen patrolling the perimeter on golf carts and guarding the beach immediately behind the sun-drenched private estate which is surrounded by dunes and lush vegetation.

The Bidens have stayed there multiple times since 2009, enjoying the run of the house – which boasts a separate guesthouse as big as a family home and huge saline swimming pool – while Allman lives at her main residence in Connecticut.

They are paying nothing for their stay, the New York Post reported Thursday, citing a source close to the First Family.

Allwin’s husband James Allwin died of cancer in 2007 at age 54. He founded the investment management firm Aetos in 1999 and was a long-time board member for Communities in Schools, a stay-in-school program.

They bought their Kiawah Island pad back in 1991 for $1.2 million and it was briefly listed on the market for $20 million in July – making it the most expensive property for sale in the state of South Carolina at that time. 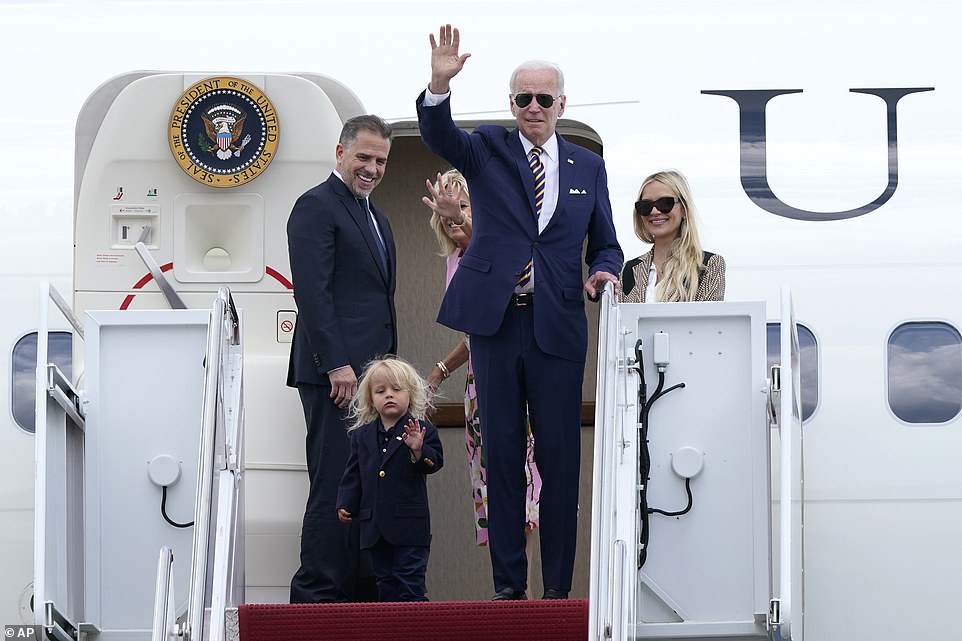 Biden’s grandson Beau waves beside the president, as his father Hunter and mother Melissa Cohen (to Joe Biden’s left) enter Air Force One 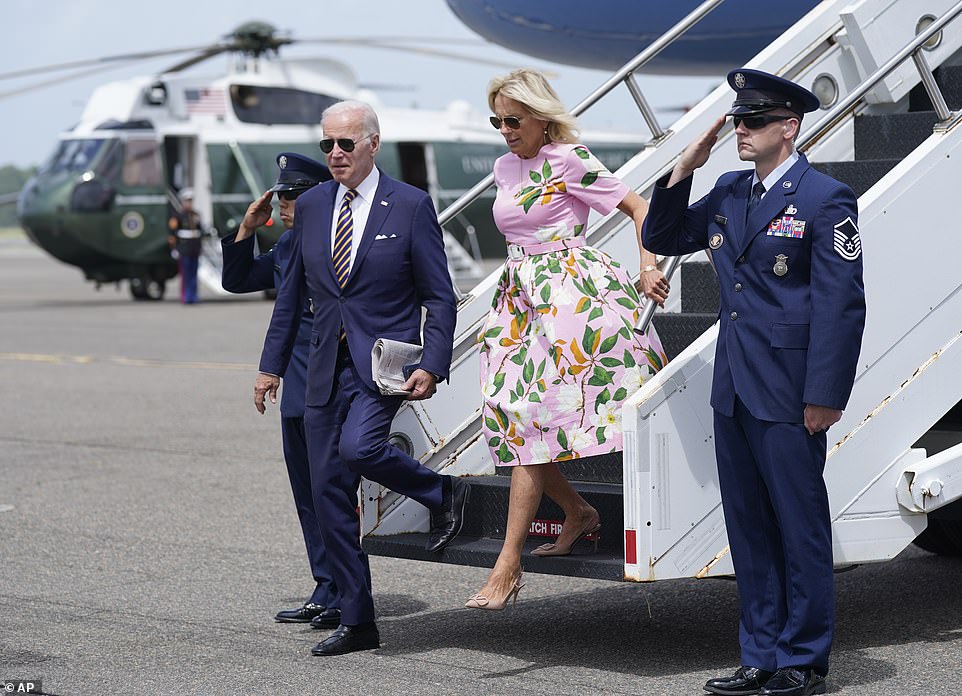 The president and his wife arrived on Air Force One in Charleston, before heading to the beach house 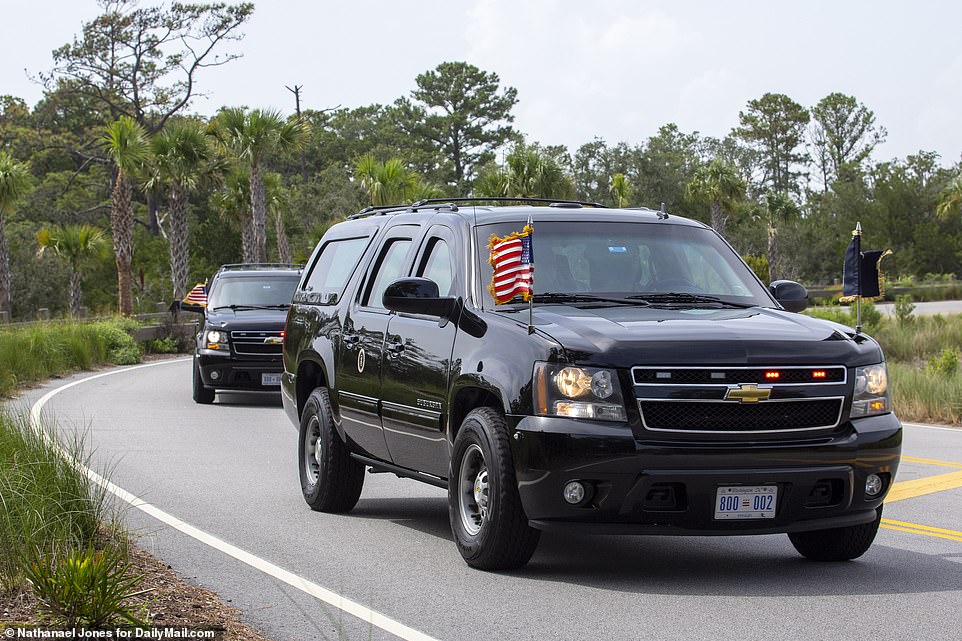 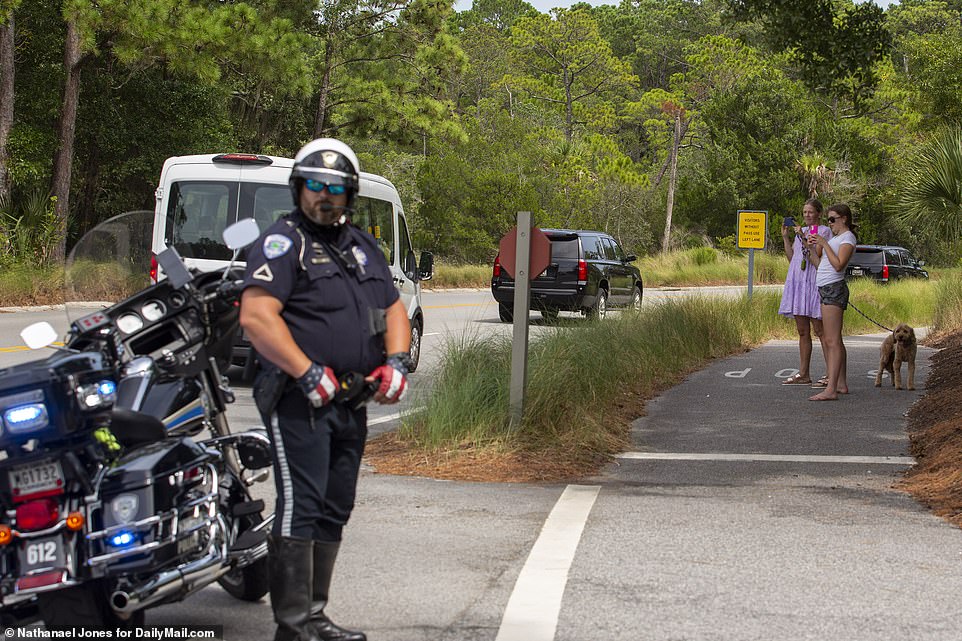 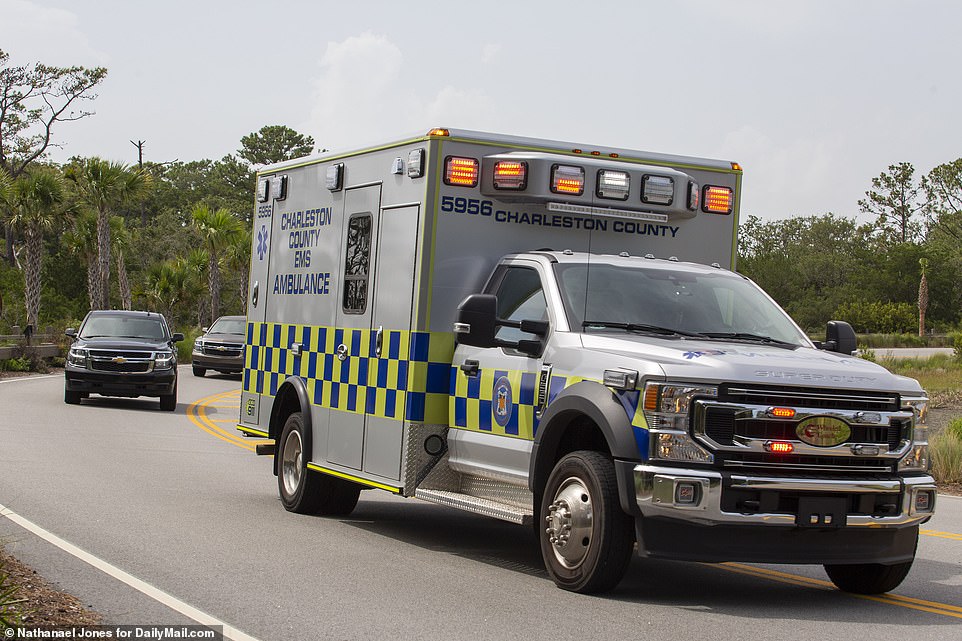 ‘A private 400 foot driveway leads you to this sprawling seaside estate, which provides an ocean side saline pool with a travertine surround, a separate pool house, and a manicured back lawn with a bridged walkway to the beach.

‘The home’s exterior is built with cedar shingles and a hipped, standing seam copper roof, punctuated by copper gutters. The circular drive approaches an impressive front facade, where the limestone stairway leads to Tischler double-doors. From the foyer, the home’s interior grandeur comes into complete and awe inspiring focus.’

Allwin’s main residence is a six-bed, six-bath $5.2million mansion in upscale Greenwich, Connecticut, according to her political donation filings. She also has an apartment on West 53rd Street in New York that cost $6,350,000 in September 2015. 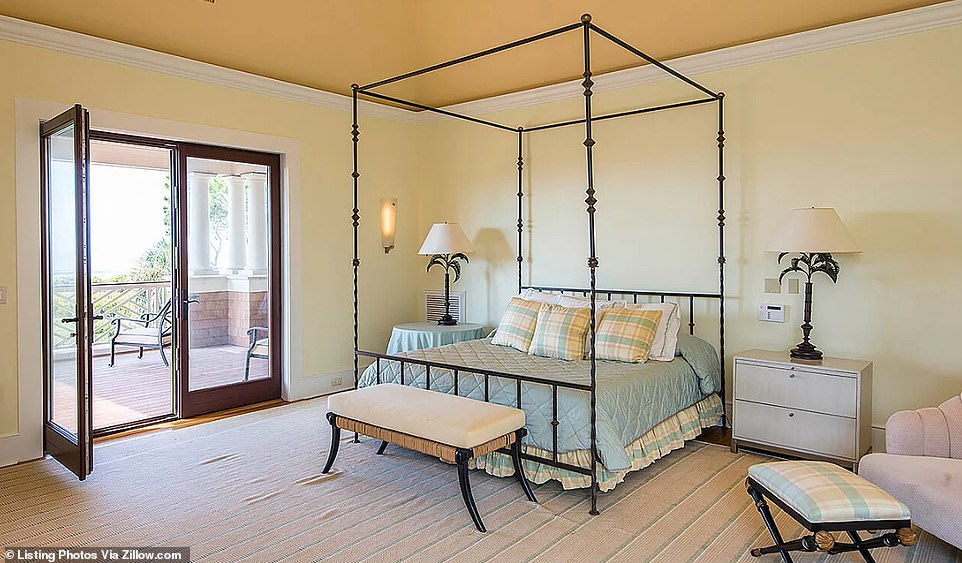 The expansive home boasts nine bedrooms and 10 bathrooms. Several of the bedrooms open out onto the beach and dunes 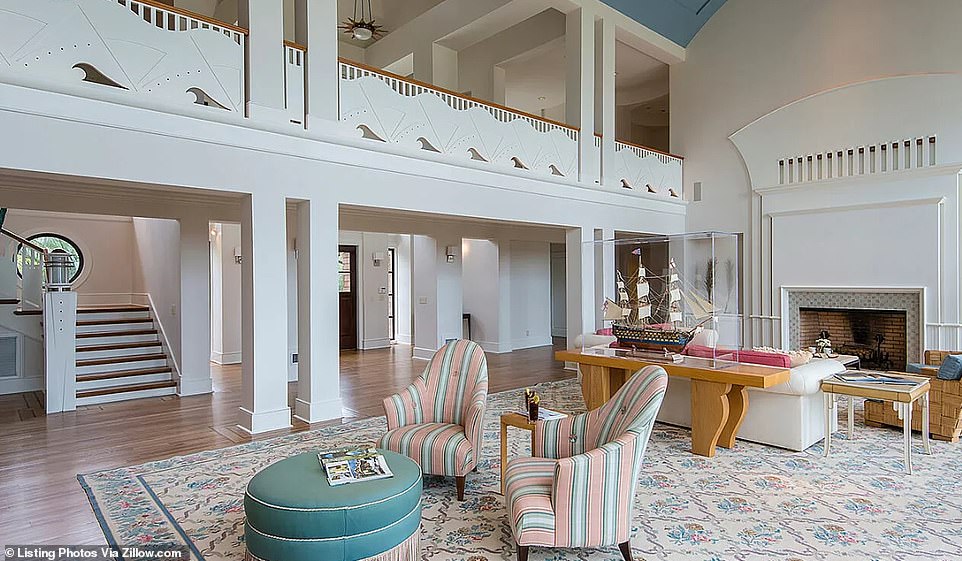 The airy, double-height living room features a working open fireplace and plenty of space for an extended family 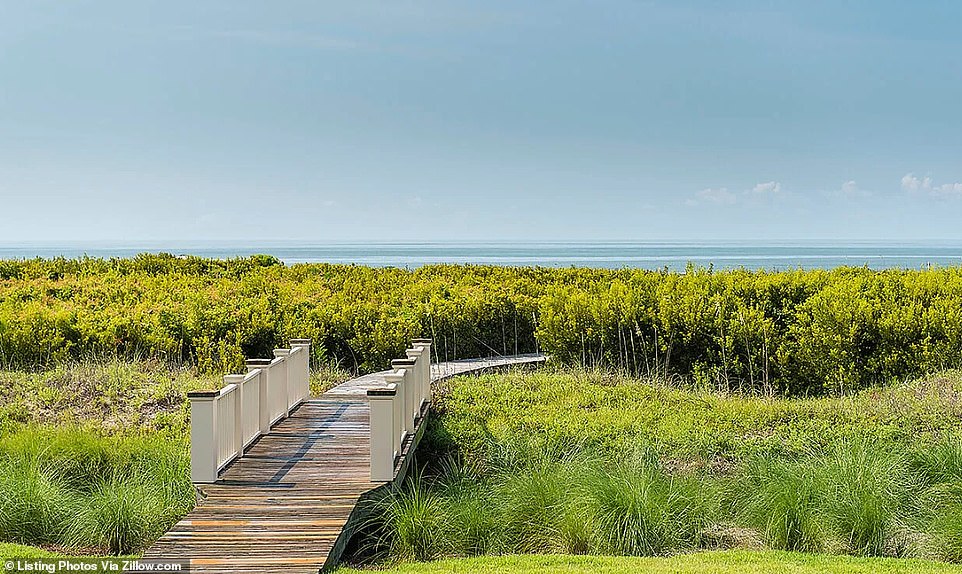 The house in South Carolina has its own boardwalk down to the beach, across the dunes

The well-connected widow has given a total of $353,662 to predominantly Democrat political campaigns according to Federal Election Commission data seen by DailyMail.com.

More recently Allwin has thrown her financial weight behind Republican Representative Liz Cheney in her effort to fend off a primary challenge from Harriet Hageman, who is backed by Donald Trump.

Donations include $5,800 split into three gifts for the Liz Cheney for Wyoming fund in March and May this year.

Obama worked on his golf game on the Massachusetts island of Martha’s Vineyard. Trump spent time at his home on his private golf club in central New Jersey.

The White House in the past has emphasized that the president is never truly free from the job’s responsibilities – and that he’ll continue to consult with aides and take his daily national security briefing regardless of his location.

At times, presidents have had to make legacy-defining decisions while on vacation, including Bush’s response to Hurricane Katrina flooding New Orleans in 2005.

Bill Clinton ordered airstrikes against al-Qaida terrorists from Martha’s Vineyard in response to the bombings of U.S. embassies in Kenya and Tanzania.

The White House has not said how long the Bidens will be on the private island but there are FAA flight restrictions in place through Tuesday. Those restrictions are standard operating procedure when a president visits an area.

While Biden is gone, the House will vote on the Inflation Reduction Act that was passed by the Senate this weekend.

The president typically heads to Delaware for his respites, either at his home in Wilmington or his beach house in Rehoboth. He spent part of August last year at each of those homes.

And President Biden last visited South Carolina in December when he spoke at South Carolina State University’s graduation at the invitation of his close friend, Rep. Jim Clyburn.

Kiawah, an island of 15 miles square feet, has an oceanfront golf resort and is 25 miles from Charleston. It is known as being one of the premier golf destinations on the East Coast.

In May of 2021, the PGA held its championship at The Ocean Course on Kiawah Island. Biden is a golf player but usually only hits the links at his country club in Wilmington.