Home » World News » Most of 39 UK truck victims were likely from Vietnam: priest

Most of 39 UK truck victims were likely from Vietnam: priest

NGHE AN, Vietnam (Reuters) – Most of the 39 people found dead in the back of a truck near London were likely from Vietnam, a community leader from the rural, rice-growing community where many of the victims are believed to have come from said on Saturday.

The bodies were discovered on Wednesday after emergency services were alerted to people in a truck container on an industrial site in Grays, about 32km (20 miles) east of central London.

Police said initially they believed the dead were Chinese but Beijing said the nationalities had not yet been confirmed. Chinese and Vietnamese officials are now both working closely with British police, their respective embassies have said.

Father Anthony Dang Huu Nam, a Catholic priest in the remote town of Yen Thanh in northern-central Vietnam’s Nghe An province, 300 km (180 miles) south of Hanoi, told Reuters he was liaising with family members of the victims.

“The whole district is covered in sorrow,” Nam said, as prayers for the dead rang out over loudspeakers throughout the misty, rain-soaked town on Saturday.

“I’m still collecting contact details for all the victim’s families, and will hold a ceremony to pray for them tonight.”

“This is a catastrophe for our community.”

Nam said families told him they knew relatives were traveling to Britain at the time the container truck would have been traveling and had been unable to contact their loved ones.

Vietnam’s foreign ministry said in a statement on Saturday that it had instructed its London embassy to assist British police with the identification of victims.

The ministry did not respond to a request for further comment regarding the nationalities of the dead.

Police in the county of Essex declined to elaborate as to how they first identified the dead as Chinese, but said they would not give any more details about the identities or nationalities of the victims until the formal identification process had taken place.

In Yen Thanh, Nghe An province, dozens of worried relatives of 19-year-old Bui Thi Nhung gathered in the family’s small courtyard home where her worried mother has been unable to rise from her bed.

“She said she was in France and on the way to the UK, where she has friends and relatives,” said Nhung’s cousin, Hoang Thi Linh.

“We are waiting and hoping it’s not her among the victims, but it’s very likely. We pray for her every day. There were two people from my village traveling in that group”.

In comments under a photo uploaded to Nhung’s Facebook account on Monday, two days before the doomed truck was discovered, one friend asked how her journey was going.

“Not good,” Nhung replied. “Almost spring,” she said, using a term in Vietnamese meaning she had almost reached her destination. 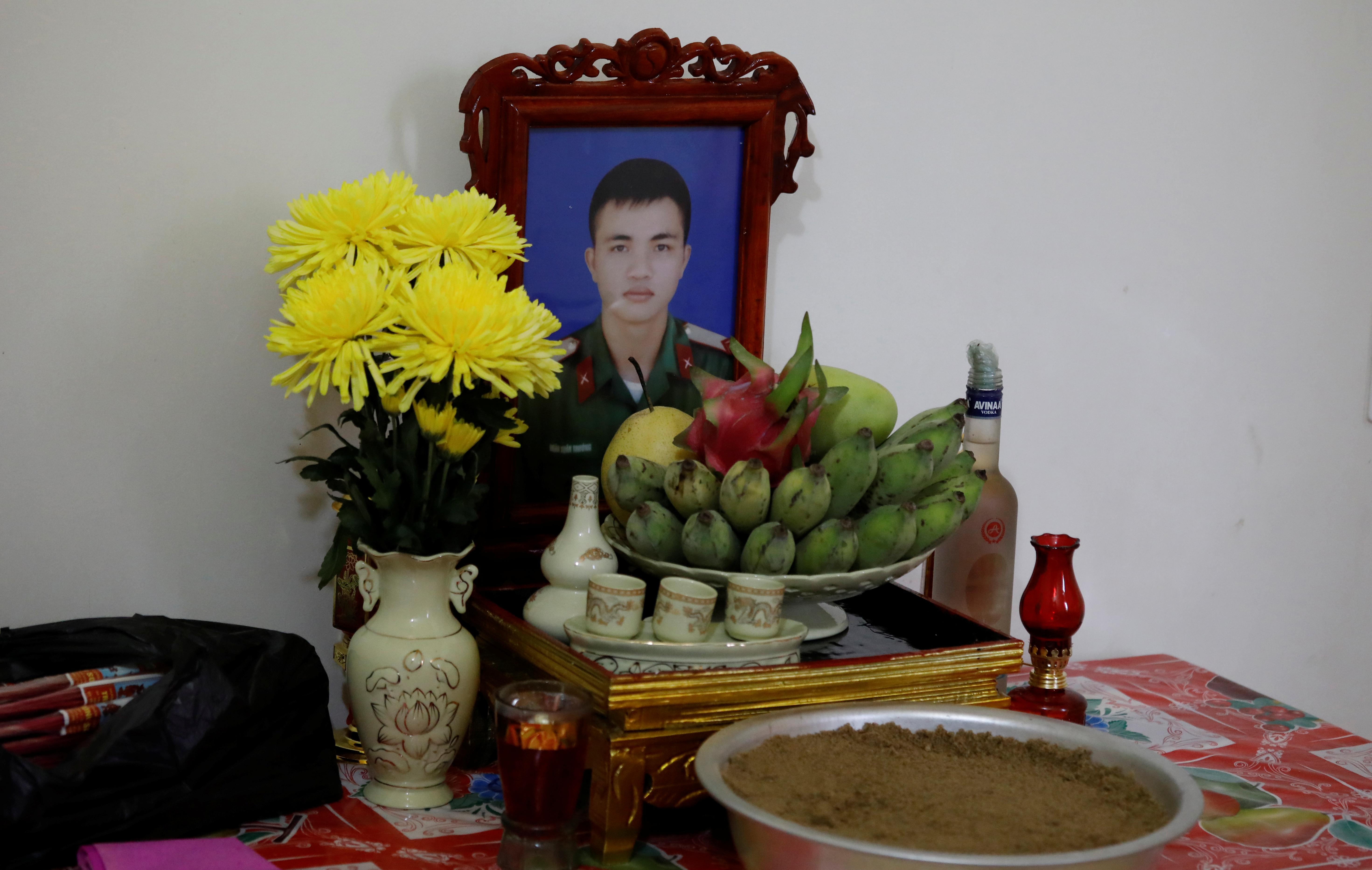 Other photos on her account show her sightseeing in Brussels on Oct. 18.

“Such a beautiful day,” Nhung posted.

Another person who may have died is Nguyen Dinh Tu, who had been working illegally in Romania, and Germany, where he lost his job.

A few months ago, he asked his wife Hoang Thi Thuong to help him raise 11,000 pounds ($14,000) to cover the cost of an illicit trip from Germany to the United Kingdom.

“I lost contact with him on October 21,” Thuong told Reuters. “I have a big debt to pay, no hope, and no energy to do anything”.

Tu’s father said relatives in the United Kingdom had told him that Tu was inside the truck, and had been planning to pick him up.

“They were supposed to pick him up at the drop-off point but they called and said Tu was in that truck,” Tu’s father, Nguyen Dinh Sat, told Reuters.

“I haven’t heard anything from my son”.

How the victims came to be in the truck is not yet known.

Police are questioning the 25-year-old driver of the truck on suspicion of murder. On Friday, police said they had also arrested three other people suspected of conspiracy to traffic people and manslaughter.

Some 70% of Vietnamese trafficking cases in the United Kingdom between 2009-2016 were for labor exploitation, including cannabis production and work in nail bars, according to a British government report last year.

“Women and girls from rural areas are also considered more susceptible to trafficking,” the report said.

Nghe An is one of Vietnam’s poorest provinces, and home to many victims of human trafficking who end up in Europe, according to a March report by the Pacific Links Foundation, a U.S.-based anti-trafficking organization.

Other victims are believed to come from the neighboring province of Ha Tinh, Father Nam said. In the first eight months of this year, 41,790 people left Ha Tinh looking for work elsewhere, including overseas, according to state media.

The province was ravaged by one of Vietnam’s worst environmental disasters in 2016 when a steel mill owned by Taiwan’s Formosa Plastics contaminated coastal waters, devastating local fishing and tourism industries and sparking widespread protests.

Another suspected victim from Ha Tinh, 26-year-old Pham Thi Tra My, had sent a text message to her mother saying she could not breathe at about the time the truck container was en route from Belgium to Britain. 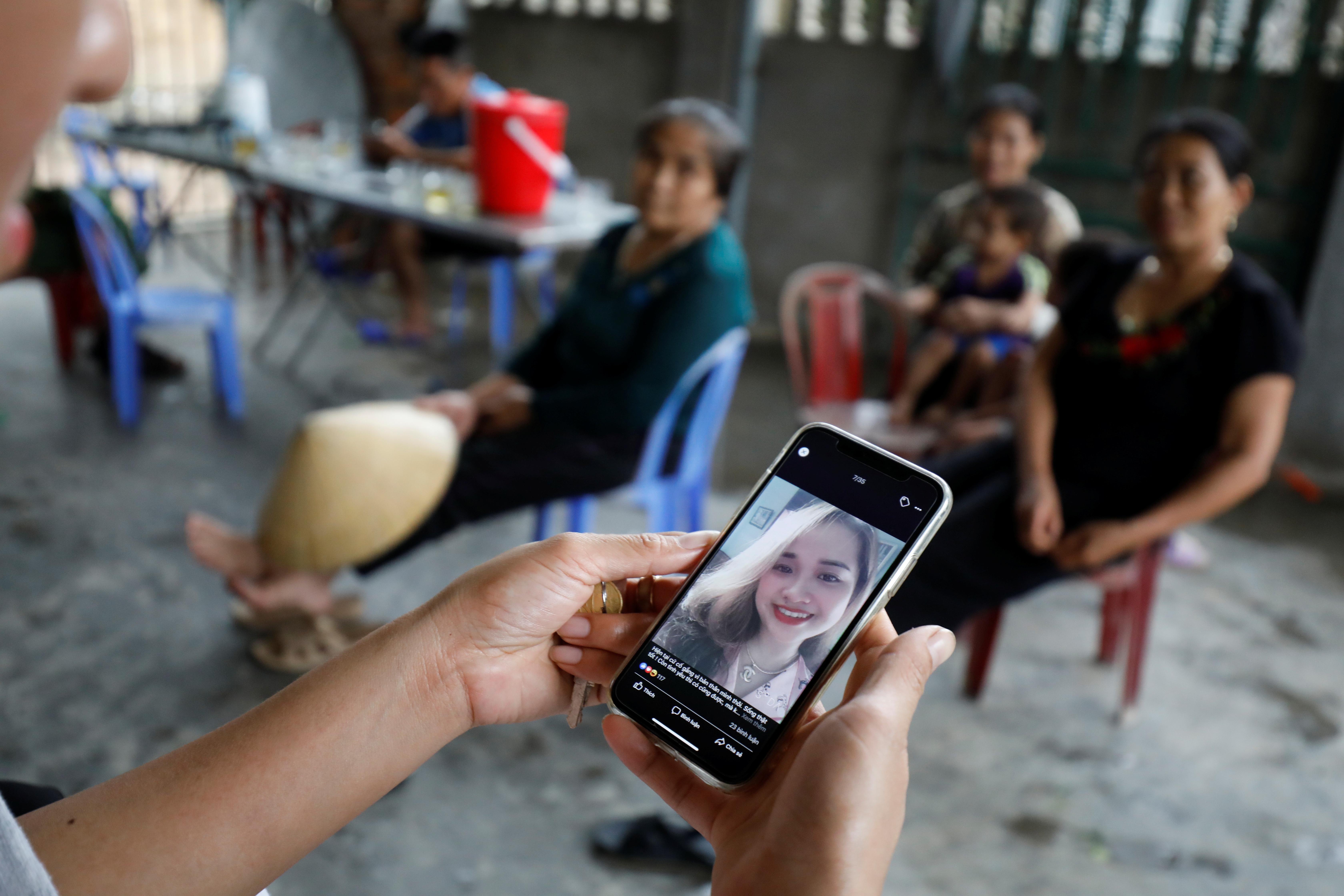 “That girl who said in her message that she couldn’t breathe in the truck? Her parents can’t breathe here at home,” Nam said.