Denis Sabbadini points to the narrow laneway below his second-storey Waiters Restaurant in the east of Melbourne's CBD. With a street frontage only as wide as its doorway, the cosy old Italian bistro and one-time sly grog venue was never built to be "alfresco".

“Being upstairs and out of the way is our cache,” says Mr Sabbadini of the legendary eatery established in 1947. “But now our history is working against us. I haven’t got space for tables and chairs out there. And imagine me racing up and down our stairs with soup and pasta.” 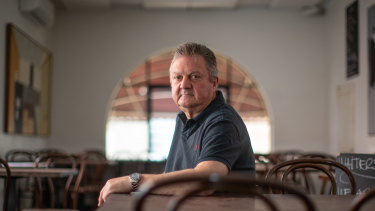 Melbourne CBD's dining and drinking culture is famously skewed towards "secret" venues which are often cramped, oddly shaped and intimate. Now in an era when social distancing and outdoor dining will probably be the norm, some of the city's most famous venues face an existential crisis.

It's an especially difficult time for the boutique venues and laneway entertainment precincts that have put Melbourne’s hospitality culture on national and international maps.

Premier Daniel Andrews’ surprise announcement on Sunday that hospitality could reopen with higher-than-expected caps on indoor and outdoor patron numbers was met with relief and frustration by operators, many of whom have endured more than six months with no little or no trading. 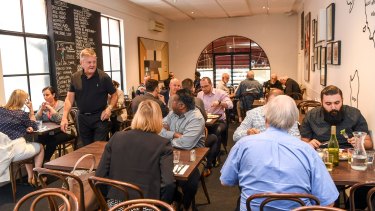 The Waiters Restaurant in happer days, before COVID-19Credit:Justin McManus

With its emphasis on transforming the city into an outdoor entertainment precinct, the plan to bring hospitality out of hibernation is in many cases at odds with reality on the ground — or above and below it.

Gary Kirwan bought basement Collins Street pub the Sherlock Holmes 14 years ago. In the years since he could barely believe his good fortune as business boomed along with the growth of the city’s population of residents, workers and visitors.

“I used to say how lucky are we to be in the heart of the city where there’s someone walking past the door all the time. We had a wonderfully sustainable trade.”

“Then came COVID, and that sat us on our bum.”

The Sherlock Holmes tried to open in June, when it seemed like Victoria had conquered COVID-19, but Mr Kirwan says the four-square-metre rule which enforced social distancing was a blow to a pub whose peak season is winter, when customers squeeze in for the cheek-by-jowl conviviality of an English pub.

“I noticed a change in attitude. COVID has made people very cautious about how they interact with other people.”

Nor will the city council’s outdoor dining plan help a pub whose “essence” is “going down into that cosy little place”, he says.

Visitor numbers to the city have crashed and may struggle to rebound amid lingering public health fears.

Dean Brumale, one of the partners in the 90-seat Hardware Club restaurant, says the new patron limits will be enough to cover the venue’s costs along with the federal government’s wage subsidy program, JobKeeper. 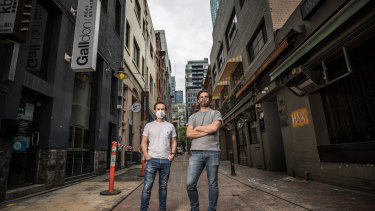 “We will definitely be putting our best foot forward and be polished and ready to go. Let’s just hope there will actually be people in the CBD who will want to come in for lunch and dinner. This is the million-dollar question.”

In analysis for The Age, economists and planners SGS predict the number of visitors expected to return to the CBD will be one-third lower than pre-COVID levels.

Nearly a million workers, visitors and international tourists used to throng through the CBD daily. But with 340,000 fewer people expected each day after restrictions are lifted, retail and hospitality businesses stand to lose millions of dollars in custom.

Research by the City of Melbourne suggests hundreds of businesses are beyond saving. About 8 per cent of hospitality venues permanently closed by April. Another 8 per cent have flagged an intention to shut.

The state government and the City of Melbourne, recognising the problems ahead, have given more than $100 million dollars worth of financial support to the industry in a bid to spark a recovery.

Planning Minister Richard Wynne, a former lord mayor of Melbourne, says the CBD reinvented itself in the 1990s and can do so again.

“People really value this and the quality of what the city has to offer them, the eating, the arts, the entertainment, the sport,” he says.

“That’s what we respond to; we are Melburnians. I think that when it’s safe to do so people will be desperate to get back into their city and to be able to claim their city again.”

But whether we’re likely to return to work and play in the CBD in sufficient numbers to keep these famed institutions afloat is far from certain.

In the brief respite after the first lockdown, Mr Sabbadini saw few customers after 7pm at "the Waiters", and “often by 9pm we were completely empty”, he says.

It's probably a first for a venue once renowned as the last place to get a drink at night in the CBD.