A Sicilian mafia boss serving a life sentence bit off and swallowed a prison guard’s finger during an altercation, an Italian news report said on Tuesday.

Guiseppe Fanara, 60, who was serving a life sentence at Rome’s Rebibbia prison, attacked seven guards in June when they came to inspect his cell, the daily Il Messagero reported.

The harsh prison regime isolates mobster bosses entirely to prevent them from running their clans from behind bars. 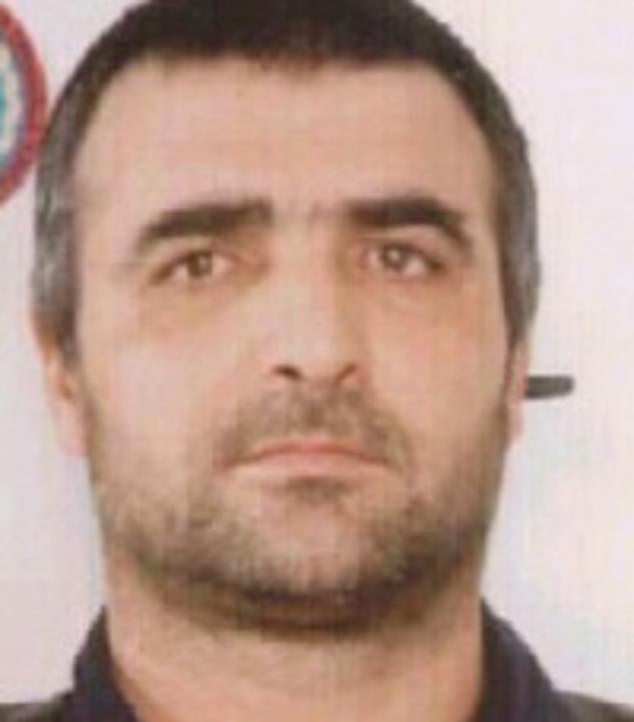 Mafia boss Guiseppe Fanara, 60 (pictured), who was serving a life sentence at Rome’s Rebibbia prison, attacked seven guards in June and allegedly bit one of their fingers off during a cell inspection. He was arrested in 2009 as part of a crackdown on the Cosa Nostra clan

‘During the altercation he (Fanara) bit off the agent’s little finger on his right hand,’ the paper said.

‘The finger disappeared, leading a Rome prosecutor to conclude it had been eaten,’ it added.

The prisoner then charged the six other guards, using a broomstick as a weapon, allegedly shouting ‘I’ll slit your throats like pigs!’

Fanara has since been transferred to Sardinia’s high-security Sassari prison, the paper said, adding he was facing new charges including aggravated assault and resisting arrest.

Fanara, of Santa Elisabetta in Sicily, was arrested in 2011 during the ‘Sicania 2’ operation, an anti-mafia blitz that investigated five murders and two failed ambushes in the late 1990s.

The Cosa Nostra clan dates back as far as the 19th century, and is a loose association of criminal groups or families that claim sovereignty over a territory.

Following widespread emigration from Sicily in the 20th century, the organisation formed a strong presence in other countries, including North America, where the American Mafia was formed.

Earlier this year Italy decided to release elderly and infirm mobster bosses – including some belonging to the influential Cosa Nostra.

That decision sparked an outcry, forcing the justice ministry to backpedal and review the release decision.

‘Members of the penitentiary police have begun reporting detainees who embrace each other with the alleged goal of increasing the possibility of contracting the virus and getting released from prison.’

According to an internal memo seen by the Guardian there are 74 high-profile dons whose ages and health conditions make them particularly vulnerable to the coronavirus.

The septuagenarians, all currently held under the 41-bis protocols which can suspend certain prison regulations by ministerial decree, include bosses of the Bellocco clan of the ’Ndrangheta and the Sicilian ‘boss of bosses’ Nitto Santapaola. 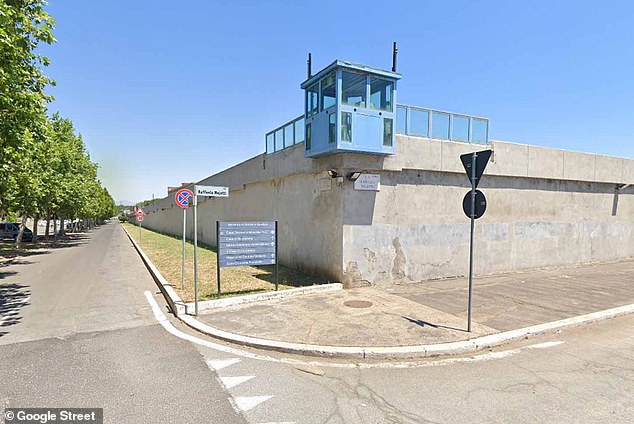 Fanara was serving a life sentence at Rome’s Rebibbia prison (pictured) but after allegedly attacking the guards, has been transferred to Sardinia’s high-security Sassari prison

Italian Justice Minister Alfonso Bonafede, said the government had not approved the releases.

‘The risk is that we’ll find the mafia virus on the streets alongside Covid-19,’ Lirio Abbate, journalist and national editor of L’Espresso, told the Guardian.

‘It would be a double pandemic that we mustn’t allow to happen.’

Earlier the pandemic, anti-mafia author Roberto Saviano, who wrote the script for Italian crime drama Gomorrah, claimed the Mafia was handing out food to Italy’s needy and offering interest-free loans to impose control over people’s lives and capitalise on the country’s coronavirus crisis.

Saviano told journalists that at the most basic level, the mob is handing out groceries to the poorest Italians to ensure favours once the crisis is over.

He added they are also preparing to snatch up struggling businesses as the country awaits European funding to boost its battered economy.

Saviano, who is currently under police protection in New York after the release of the series, is an expert on mafia groups and how they have successfully expanded beyond drugs and other illegal activity to worm their way into otherwise legitimate businesses and sectors across the world.

His fears have been echoed by both anti-mafia investigators and politicians as the virus batters Italy.

In April, Pope Francis slammed ‘the mafiosi and the loan sharks’ who are exploiting the pandemic to make a quick profit.