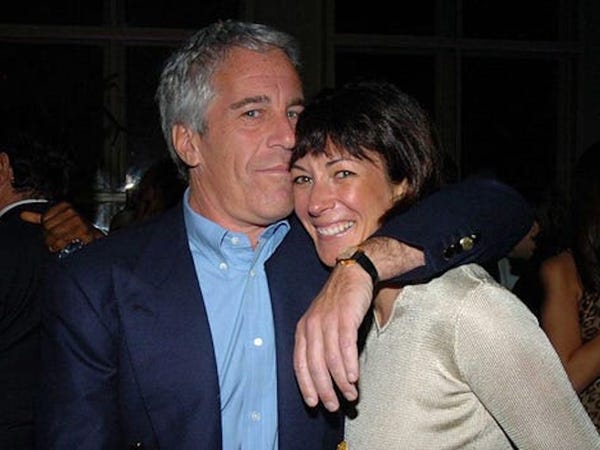 The newly unsealed 2016 deposition of Ghislaine Maxwell shows that Maxwell was questioned at length about a puppet Prince Andrew allegedly used to sexually abuse young girls.

Jeffrey Epstein accuser Johanna Sjoberg described the puppet in her own deposition, unsealed in 2019. She said it had a tag that said "Prince Andrew" and that she "knew it was Prince Andrew because I had recognized him as a person. I didn't know who it was."

In the seven-hour-long deposition, Maxwell denied gifting the prince a puppet, but admitted that the prop in question, which she called a "caricature," was in at Jeffrey Epstein's New York home.

When questioned about the puppet, Maxwell was initially elusive, repeatedly asking the attorney to be more specific about what kind of puppet he was referring to.

Eventually, when pressed, she admitted that it existed.

When asked if the caricature was used by someone — presumably Andrew — to touch a breast, Maxwell said she didn't recall.

When asked she instructed Giuffre to sit on that person's lap with the puppet, Maxwell said she didn't remember that either.

The documents are a part of an ongoing 2015 civil lawsuit brought by Virginia Roberts Giuffre. Giuffre has accused Maxwell and Epstein of sexual abuse, and Sjoberg said she witnessed Andrew fondle her with the puppet.

Giuffre has alleged that she had sex with Prince Andrew, who she is famously photographed with, after being recruited by Maxwell.

The public first learned about the reported existence of the Prince Andrew puppet last year when testimony from Johanna Sjoberg, who gave her own deposition for Giuffre's lawsuit, was unsealed in 2019.

Sjoberg said that Maxwell once pulled her aside in her London home to grab a puppet of the prince.

Sjoberg said that at one point someone suggested taking a photo of her with Prince Andrew, Giuffre, and the puppet, which is when the situation turned inappropriate.

"Andrew and Virginia sat on the couch, and they put the puppet … on her lap," Sjoberg said. "I sat on Andrew's lap, I believe on my own volition, and they took the puppet's hands and put it on Virginia's breast, and so Andrew put his on mine."

Prior to her statements to investigators, Sjoberg told the Daily Mail in 2007 that Prince Andrew had groped her at Epstein's seven-story townhouse in New York City while the two posed for a photo at a party.

"I sat on his lap — and he put his hand on my breast," Sjoberg said at the time.

It is well documented that Prince Andrew had spent time with Epstein at several of the disgraced financier and convicted sex offender's luxurious properties.

Epstein and Prince Andrew were introduced in the 1990s by Maxwell, Epstein's then-girlfriend, and formed a close friendship through the late '90s and early 2000s, according to a 2015 Guardian report.

They remained friends for 20 years.

Justice Department investigators have said they've repeatedly tried to interview Prince Andrew about Epstein and Maxwell, but that their offers have been rebuffed.

Representatives close to Andrew's legal team told Insider earlier this year that the team had tried to communicate with the DOJ but had been ignored.

One of the documents unsealed Thursday, however, shows that Prince Andrew had been sent a certified letter in 2015 asking for his cooperation answering questions about an Epstein victim, but the letter had been refused.

"We would welcome Prince Andrew coming in to talk with us," Audrey Strauss, the Acting United States Attorney for the Southern District of New York, told reporters in July, following Maxwell's arrest. "Our doors remain open."

Maxwell remains in jail awaiting trial on charges that she recruited, groomed, and trafficked girls as young as 14 for Epstein.

You can read Maxwell's 2016 deposition, which the Miami Herald successfully sued to be released, here: