Home » World News » Get on board: how games are helping people beat the lockdown

Get on board: how games are helping people beat the lockdown

On Saturday nights under normal circumstances, board games are spread out on folding tables in the games room at the Castle Hill RSL Club. From 3pm to 2am, gamers strategically optimise their moves. The Northwest Tabletop Gamers group, founded three years ago, started meeting at the RSL in January 2020.

Pandemic – a board game focused on saving the world from a viral plague – is a stalwart of these meet-ups. Co-organiser Peter Kinsley says Pandemic is one of his favourites; he calls it "the gateway game", appealing to die-hard gamers and newbies alike. 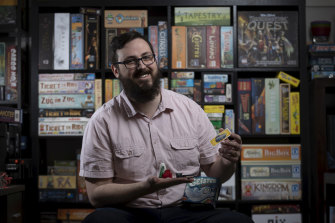 Peter Kinsley, a board game player and one of the organisers of the Northwest Sydney Table Top Gamers Group, at his North Kellyville home.Credit:Brook Mitchell

"With everything that was happening, I had [started] sticking Pandemic in the bag of games to bring to game night for a bit of, like, 'Let's play Pandemic because we're potentially headed into one'."

Kinsley, who is a civil engineer, was drawn to the game about 10 years ago, when he played it at a meetup in Chatswood.

"Pandemic was different," he says. "You were all trying to beat the game."

A demand for co-operative games, in which players work together, inspired Matt Leacock to design Pandemic. In 2004, the news was heavy with the SARS outbreak. He began taking notes on scraps of paper after walks with his then-newborn daughter and by 2007, he had prototyped a game with a common goal: to defeat a fatal, global virus. 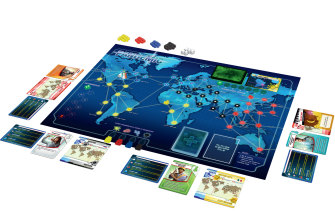 The board game Pandemic, created by Matthew LeacockCredit:Z-Man Games

"It seemed to me that would make a great foe," says Leacock. "Everybody can get on board with fighting that."

A former user-experience designer and Yahoo employee, Leacock's basis for the game was "more like an action-movie understanding of how you might fight a pandemic". 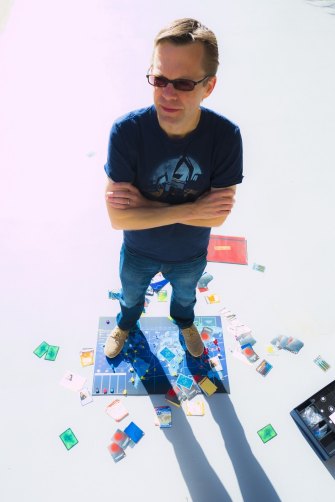 Matthew Leacock, the creator of the board game Pandemic.Credit:Douglas Morse / tabletopmovie.com

"It's only now with our current crisis that people are looking at it in the lens of a real pandemic," he says.

He has no intention of updating Pandemic to reflect 2020's contagion, but he says board games are a tool to examine the world – and plan accordingly.

This year, Hasbro's Monopoly – the well-known real estate board game– turns 85; The Game of Life hits 60. 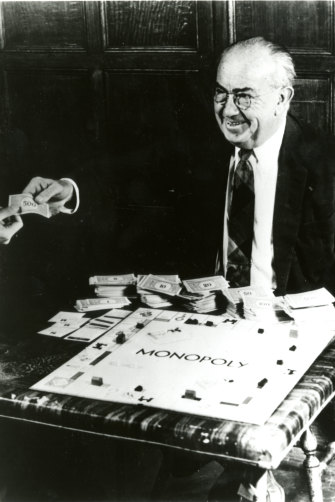 Charles Darrow, the creator of Monopoly as we know it today, with his famous game. Credit:Phil Orbanes

While Monopoly, as we know it today, was designed in the midst of the Great Depression by New Jersey's Charles Darrow, who fashioned the game from bits sitting around his home, his vision was reportedly modelled off a game called the Landlord's Game, patented in 1904 by Lizzie Magie. The feminist stenographer designed the game as an act of anti-monopolist sentiment to teach Americans about capitalism. As Mary Pilon, author of The Monopolists, a comprehensive book on the origins of the board game, wrote in a 2015 Smithsonian article, Magie's game was fondly played in intellectual circles, but it wasn't until Darrow reimagined the game and sold it to the Parker Brothers in the mid-1930s that it took off. Magie sold her patent to the board-game empire in the same year, but it had nowhere near the same traction.

As Monopoly's popularity increased, its rights were sold to local markets. In the Australian version, tiles feature Sydney Harbour and Alice Springs, and you can play as a barbeque, cricket bat or a kookaburra. 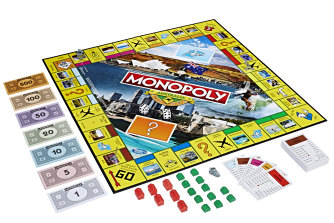 The Australia edition of Hasbro's Monopoly board game, complete with a meat pie for a playing piece. Credit:Hasbro 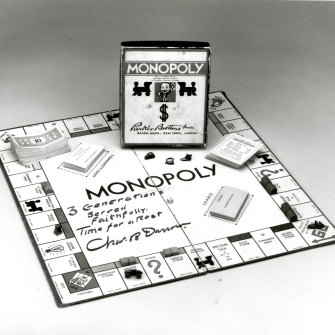 A 1938 edition of Monopoly, signed by the creator, Charles Darrow.Credit:Phil Orbane

Context can be embedded less directly in games, too. Fluxx, a card game that has expanded into more than 30 variations, was originally designed to solve Andrew Looney's business partner's request for an easy-to-learn, multiple-ending card game. Looney Labs used the Stoner Fluxx "as a microphone, so to speak" to support their pre-founding legalisation activism. 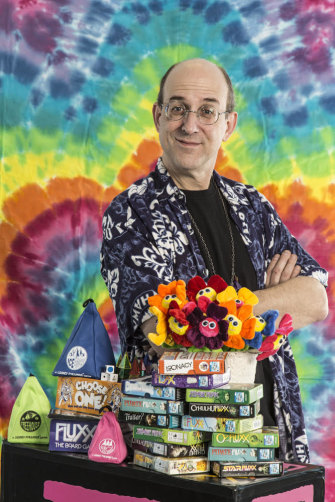 Andrew Looney, the game designer and creator of Looney Labs, with the various Fluxx card decks he has designed.Credit:Benjamin C Tankersley

Can games help us navigate the future? Looney thinks so.

"The act of play is vitally important to how we interact with the world," he says. "Games let us run little simulations … of situations and worlds we can only imagine, but allow us to practise and prepare for similar situations in life."

'Being able to relate the game to our personal situation is perhaps more important than the situation in which the game was developed.'

And even those we haven't imagined yet, according to Jonathan Fryxelius of the Fryx Games family. His brother Jacob designed Terraforming Mars, a game with the aim of making Mars habitable for human life.

"It is rather a vision for the future, and as this vision is shared among more and more people, it will shape our culture," says Jonathan.

Dr Rogerson, who studies the experience of playing board games, says playing is more collaborative than we think.

"We still have houses, we still live on streets, we still have families … we still move through our lives. I think that's also where Pandemic is also fantastic: everybody gets sick."

She mentions other games that "hook into something in our collective imagination or our collective interest", such as Twister, which took on a new flavour after swinging parties led to naked versions of the physical game; Settlers of Catan, which Dr Rogerson says is "often credited as being the tipping point of when German games or modern European games became known around the world"; and Snakes and Ladders, a traditional Indian game. 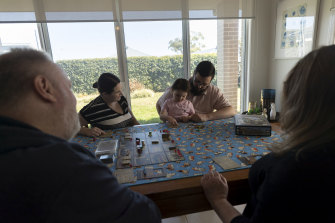 Kinsley plays a board game with his wife, daughter and members of the Northwest Sydney Table Top Gamers group, at his Kellyville home,Credit:Brook Mitchell

"Snakes and Ladders is actually an old Indian game, it’s hundreds of years old, it’s about the path to karmic enlightenment basically. One of the reasons it's a terrible game, because it’s all in the luck of the dice, is that that's what they’re trying to show… you’re not in control of what happens in your life."

But making a game that is centred on 2020's variety of crises?

"Are we going to want to play that game in 12 months' time? How can they make that game interesting rather than, 'Oh, remember when we stayed home for three months?'" she says. "The historical context of where it’s designed is important but it also needs to speak to now." 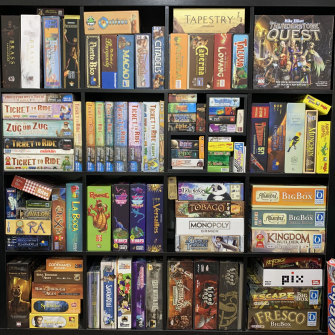 Leacock's next game centres on the climate crisis. As a request for a game topic, "this one kept coming up again and again".

His plan is for a co-operative style game, like Pandemic; "if all goes well", it will be released in a couple of years.

Our weekly newsletter will deliver expert analysis of the race to the White House from our US correspondent Matthew Knott. Sign up for The Sydney Morning Herald‘s newsletter here, The Age‘s here, Brisbane Times‘ here and WAtoday‘s here.