The daughter of Melbourne underworld figure Mick Gatto has launched defamation action against an apartment owner who claimed her property management business was run by criminals.

Sarah Awad, who is married to convicted cocaine trafficker Danny Awad, was the sole director of a company called State Owners Corp Pty Limited, which manages the body corporate for an apartment building called The Gilbert in Preston. 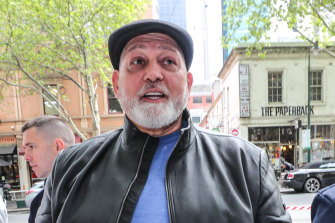 Jonathan Lunt was a member of the owners’ corporation committee for The Gilbert when he sent an email last year to five other committee members about a tradesman’s quote to repair a broken garage door.

“He (the tradesman) also said that for him to put some pins back in will cost $500 further out of hours call back. Yep that’s $250 per pin for 30 secs work. What the? Guess when your [sic] managed by criminals, what to [sic] expect by their preferred contractors,” Mr Lunt stated in an email on October 16 2020.

The message was “inadvertently cc’d to the first plaintiff [Ms Awad]“, according to court documents.

Lawyers for Ms Awad, who has no criminal convictions, claim she “has been seriously injured in her feelings, credit and personal and professional reputation”, according to a County Court writ. They also allege that Ms Awad’s business “has suffered, and continues to suffer, loss and damage”.

However, Mr Lunt’s lawyers claim the email was not referring to Ms Awad, but her husband who is presently serving a 15-year prison sentence.

“Any reference to criminality in the email was meant and understood by each of the recipients to refer to the first plaintiff’s husband, Danny Awad”, according to a defence statement filed by Mr Lunt’s lawyers.

His lawyers claim that Awad was involved in the operation of the body corporate business, despite being listed as a company director for just 39 days in 2012.

In the defence statement, Mr Lunt’s legal team cite sentencing remarks by County Court judge Mark Dean as evidence of his ongoing role in the business.

“In 2011 you started State Owners Corporation, an owners corporation management business that you operated with your wife. You were managing this successful business at the time of your offending,” Judge Dean said on November 12, 2019.

Awad must serve at least 10 years in jail before he is eligible for parole over his role in the importation of more than 22 kilograms of cocaine imported from Mexico, hidden in the paper trays of Xerox printers.

Mr Gatto, who provided a character witness for Mr Awad at the 2019 trial, was recently unsuccessful in a major defamation case against the ABC over a 2019 online article that reported an allegation he had threatened to kill barrister-turned-informer Nicola Gobbo after learning she was a police informer.

The report by the national broadcaster also contained details of evidence that alleged Gatto was implicated in one of Melbourne’s gangland murders.

Mr Gatto gave evidence during a trial last year and said he had launched the defamation proceedings because he believed the ABC had “crossed a line” by publishing an article that he said suggested he was a “murderer, hitman and one of the most violent men in Australia”.

But Supreme Court Justice Andrew Keogh found in favour of the ABC and dismissed Mr Gatto’s case in February.

Justice Keogh found the meanings that Gatto claimed the article conveyed were not made out. He also found the ABC’s report was fairly and accurately based on court proceedings, and that it attributed the evidence of allegations against Mr Gatto to witnesses, namely in a police inspector’s affidavit and in oral evidence given by Witness B, a former client of Ms Gobbo.