A stray dog in China has been left covered by nasty bruises after being dragged along a road by a motorcyclist who wanted to ‘keep it as a pet’.

Horrifying footage shows the small pooch tied by its neck with a rope attached to the vehicle while helplessly moving its paws, trying to escape.

An onlooker spotted the shocking scene and stopped the man. The dog has been taken to a veterinary clinic by a local resident and receiving treatment. 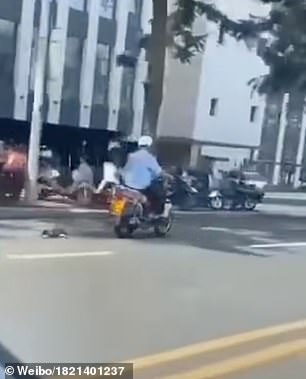 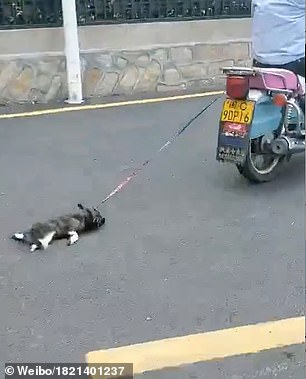 Horrifying footage shows the motorcyclist pulling the small pooch along a road in Shishi, Fujian province of south-east China as the animal helplessly moving its paws, trying to escape

The 48-year-old motorcyclist, known by his surname Wu, was punished by police for breaking traffic rules after the authorities were alerted about the incident.

The event occurred earlier today in Shishi of south-eastern Chinese province Fujian, the officials said. It was brought to light after an onlooker shared the footage online.

The heart-wrenching video shows Mr Wu, dressed in a uniform, riding the motorbike at a fast speed while the stray dog was strapped around its neck by a long leash attached to the moving vehicle.

Another road user who spotted the scene can be heard shouting: ‘Why are you dragging the dog like this? It’s almost dying!’

The man was then forced to stop the vehicle as other onlookers gathered around.

Mr Wu, believed to work as a security guard at a local residential compound, claimed that he was taking the stray dog home to keep it as a pet.

He told the police that the animal was initially running behind his motorbike. It ended up being dragged along the road after ‘becoming exhausted’, according to the authorities.

The dog suffered injuries on its legs and was taken to a vet by an onlooker who offered to adopt the stray pooch, police said.

A picture uploaded by a resident shows the poor animal with bruises along its body while being treated at a local veterinary clinic in Shishi.

Mr Wu was punished by the authorities for ‘driving across prohibited markings’, according to a notice, without specifying the punishment.