UEFA has opened disciplinary proceedings against Montenegro, including a charge of racist behaviour, following England’s 5-1 Euro 2020 qualifying victory in Podgorica.

Several England players – including Raheem Sterling, Danny Rose and Callum Hudson-Odoi – were the target of racist abuse during the match.

Montenegro also face charges relating to crowd disturbances, the throwing of objects, setting off of fireworks and the blocking of stairways at the Gradski Stadion, UEFA has announced in a statement.

Anti-racism campaigners and politicians had demanded UEFA change its approach towards racism after the sickening display last night.

UEFA has previously been criticised for issuing paltry fines for such abuse, and campaigners said it is clear the European governing body must change tack.

The governing body said the case would be heard by its Control, Ethics and Disciplinary Body on May 16, prior to the next round of qualifying fixtures in June.

Montenegro’s next match will also be at home when they face Kosovo on June 7. 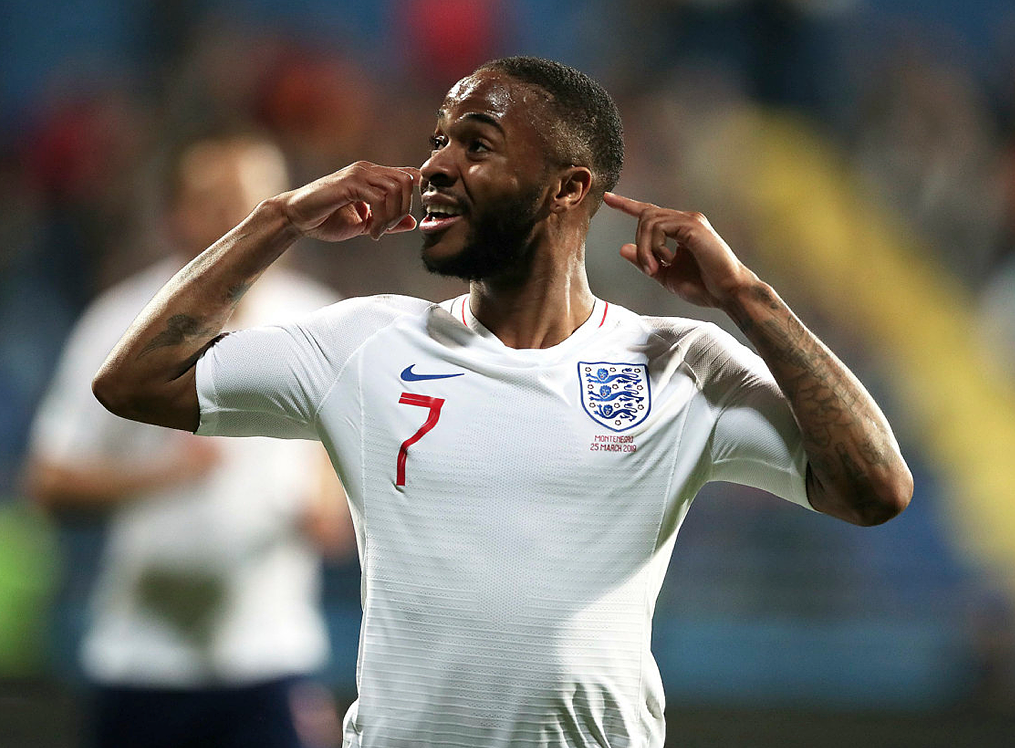 Sterling wants to see swift and severe action taken by UEFA and insists banning only the few people who are caught is not enough.

“It is 2019 and I think there should be a real punishment for this, not just for the few people being banned,” he told BBC Radio 5Live.

“It needs to be a collective thing. This stadium holds 15,000 and I think the punishment should be that as a nation your fans are chanting racist abuse so I think it should be the whole stadium can’t watch it. 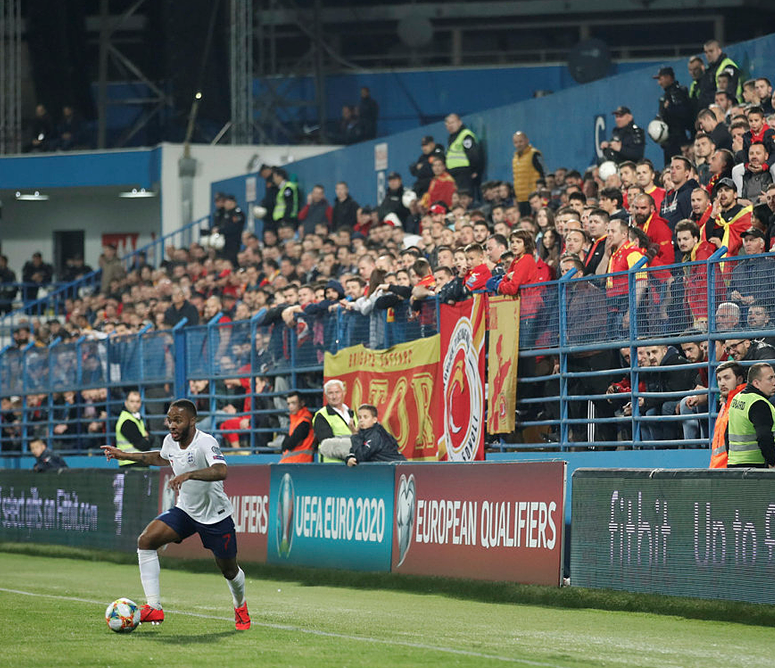 Hudson-Odoi said: “I don’t think discrimination should be anywhere I think we’re equal, we have to play a fair game and enjoy the moment.

“When you’re hearing stuff like that from the fans it’s not right, it’s unacceptable. Hopefully UEFA deal with it properly because when I went over there, me and Rosey heard it, monkey stuff.

“Raheem has always helped, no matter what. He’s been talking to me about it, trying to say me to: listen, don’t worry about it, it’s football, people do it.

“Obviously it’s not right but you’ve got to stay strong. People are always going to be rude to you or say stuff you don’t want to hear.

“It’s part of football, sometimes you have to block it out of your head, and just keep going with the game.” 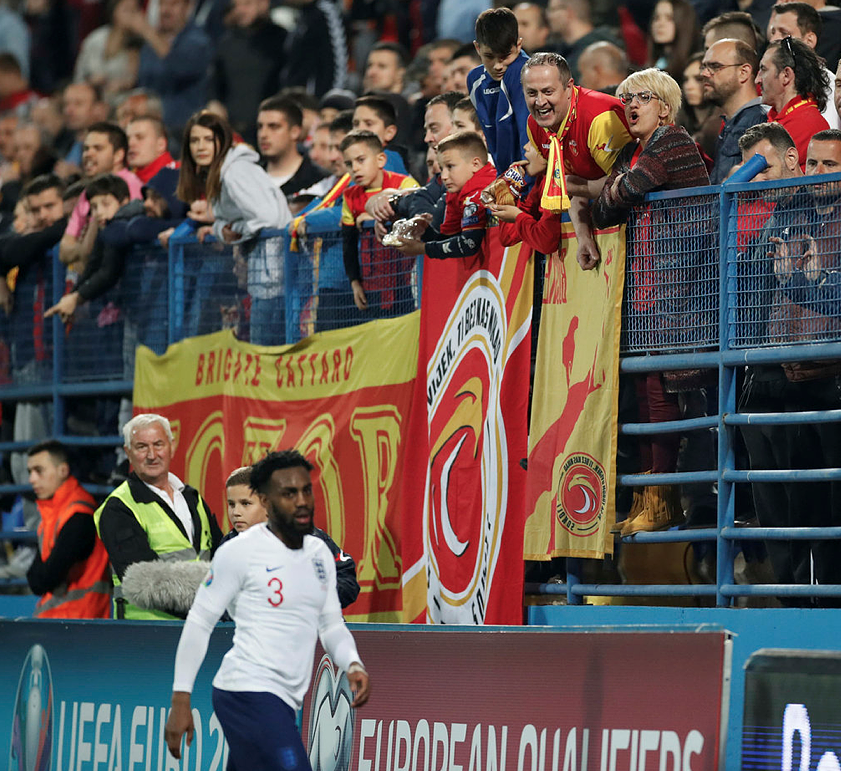 Kick It Out campaigner Troy Townsend said UEFA had “failed the game” in its handling of racist abuse.

Townsend said he expected UEFA to issue another fine but for nothing to truly change.

“I’d like them to take the strongest possible action,” he said.

“What will happen? A fine, as normal. The fine which will probably amount to nothing to be honest.

“Will they stadium ban this time? They might close a section of the stadium but I don’t think anyone can second guess what UEFA are going to do on this.” 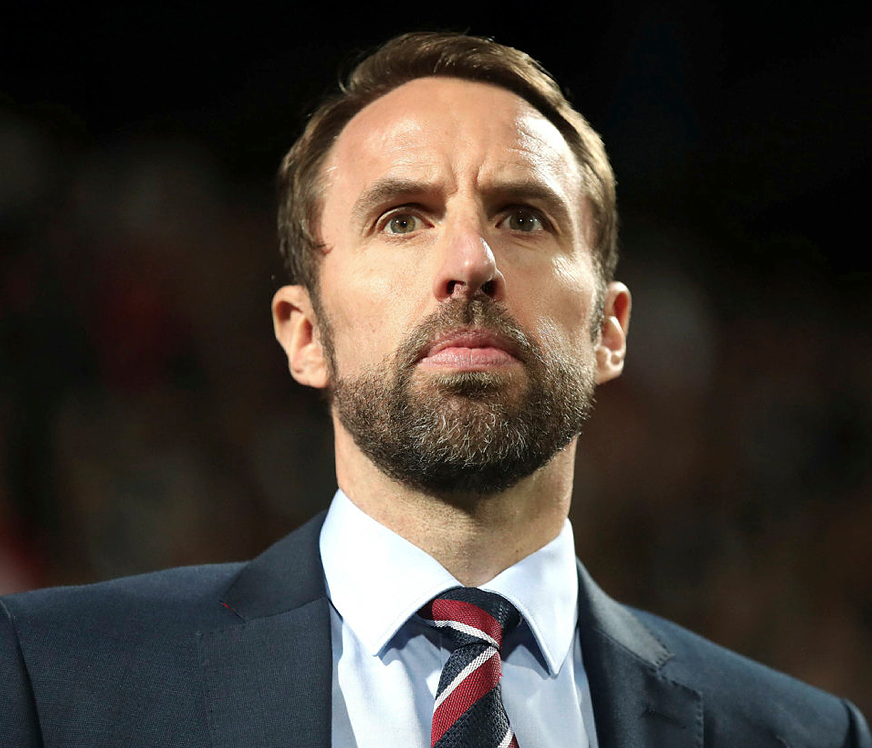 Football Against Racism in Europe (FARE) said it had designated the match as “high risk” prior to it taking place, and called for UEFA to act decisively.

“We commend the reaction of the England players involved, no human being should have to face abuse and vilification for their race or identity, something that many Montenegrins will understand from the divisive and bloody recent history of the Balkans,” FARE said in a statement.

The statement added: “The challenge of tackling racism and other forms of discrimination in European football however remains an ongoing issue. The societal change and education that is the ultimate solution is slow to take place.

“Even in the countries of Western Europe where there has been investment and focus on these issues discrimination remains a stain on football.” 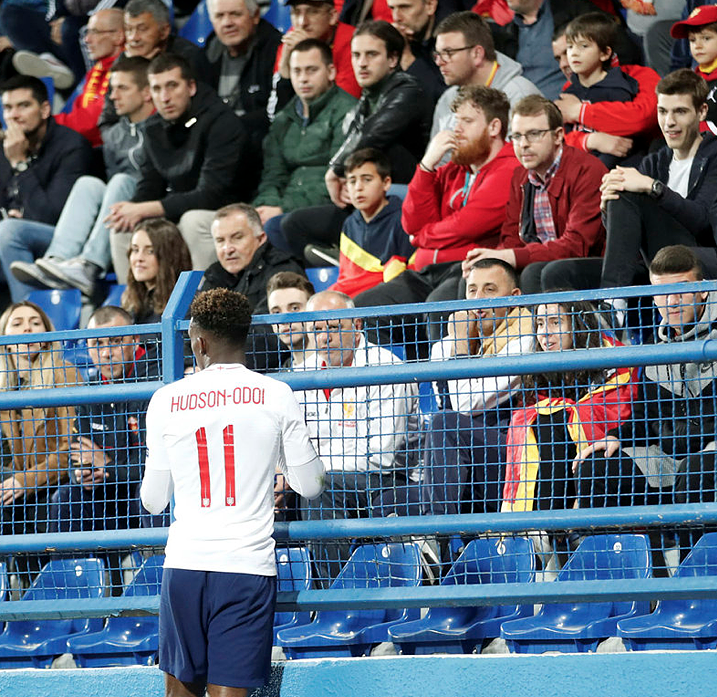 Labour Party leader Jeremy Corbyn called the abuse “disgusting” in a tweet, while his deputy Tom Watson was critical of UEFA.

“The appalling racial abuse directed at England footballers in Montenegro cannot be allowed to continue,” Watson wrote in a tweet.

“For far too long UEFA has obfuscated its responsibilities. Officials must heed the significant words of Raheem Sterling and impose a full stadium ban.” 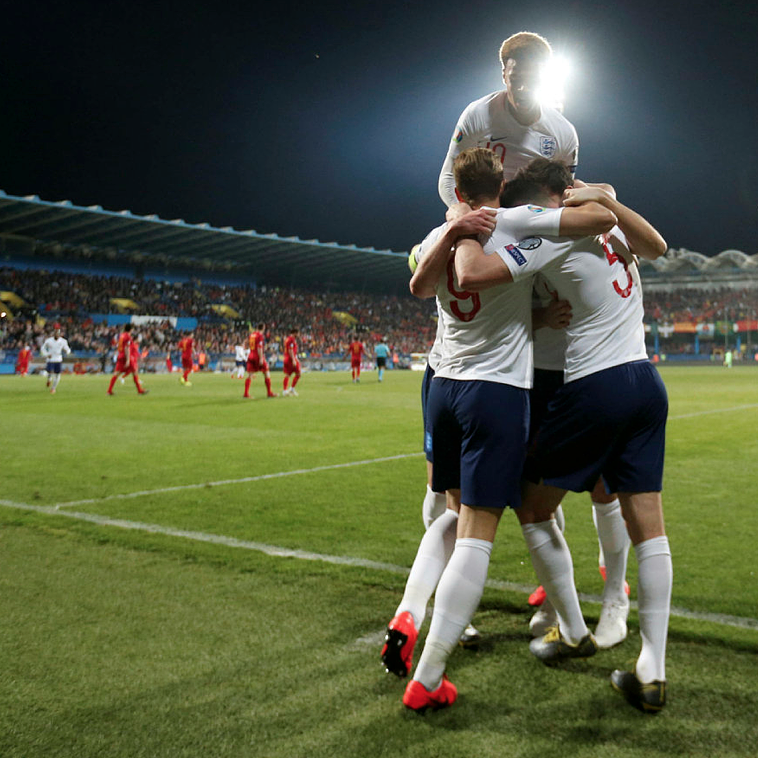 Gareth Southgate underlined the need for education when tackling the kind of racism endured by England’s players on a night of shame in Montenegro.

Ross Barkley’s brace was complemented by goals from Michael Keane, Harry Kane and Raheem Sterling as the Three Lions overcame the hosts’ early opener to seal an impressive 5-1 win.

But there was barely any talk about the football after Monday night’s Euro 2020 qualifier as the Group A clash in Podgorica was marred by racism.

Danny Rose and Callum Hudson-Odoi were subjected to monkey chants in the first half, with Sterling celebrating the fifth goal by pulling his ears as a sign of defiance to what he later called on social media “racists”.

Rose was abused again towards the end of the match and UEFA is now set to launch an investigation into the abuse. 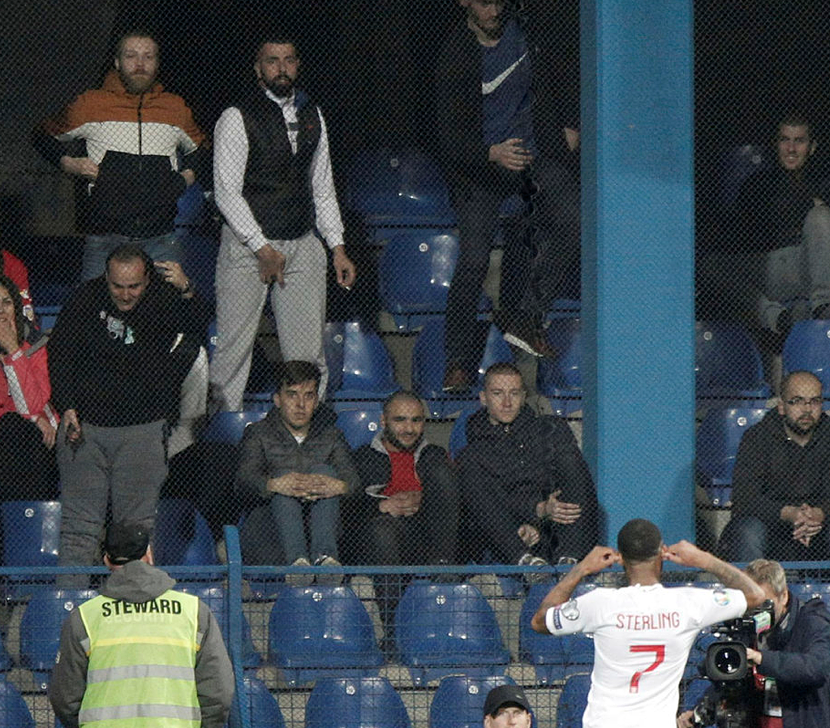 An emotional Southgate struggled to gather his thoughts after the game and did not want to be drawn into sanctions, instead pointing to education when he was told that Montenegro boss Ljubisa Tumbakovic claimed not to have heard anything.

“I don’t think I need to comment on what was said,” England boss Southgate said. “It was clear to everybody that there were comments made.

“Reflecting on sanctions, sanctions are only of any use if they lead to education.

“Sanctions are worthless if there is nothing alongside that to help educate people.

“My kids don’t think for one minute about where people are born, what language they speak, what colour they are.” 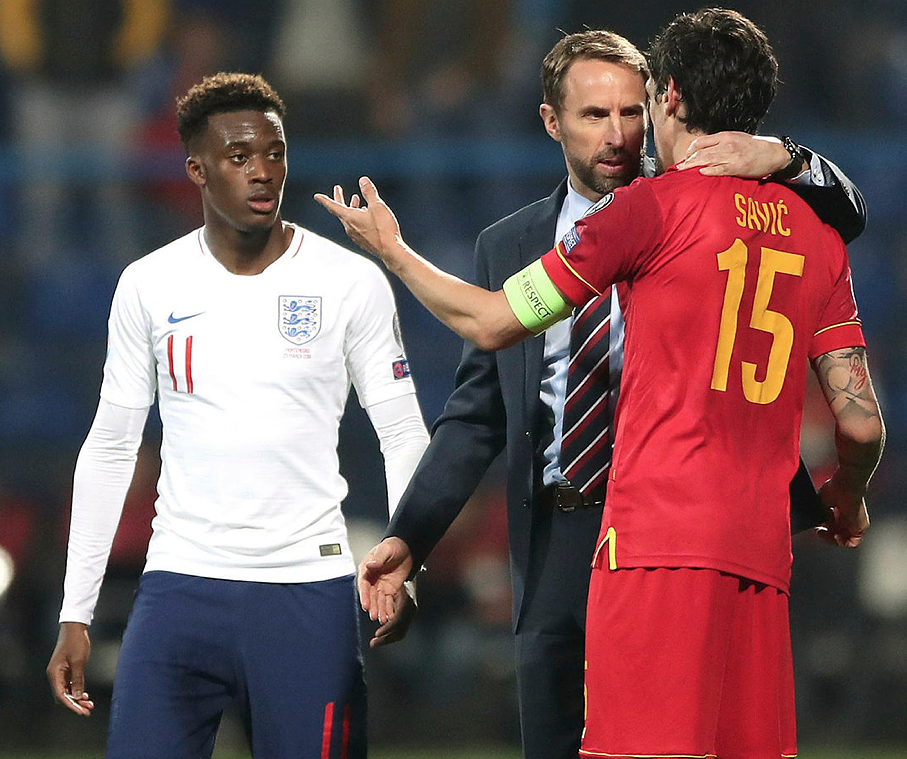 He said: “There’s an innocence about young people that is only influenced by older people. So, we have to make sure that the education is right for everybody.

“In our country, (it’s) the same. I’ve said this before, I’m not sitting here just criticising what’s happened tonight because in our country we have the same issue. We’re not free of it.

“You can sanction clubs (or countries), but frankly that’s not going to stop one or two people who are of a mindset from doing what they want to do.

“So, we have to make sure that we educate young people because we have a better chance with young people and then we’ve got to lead that as far and as wide as we possibly can.”