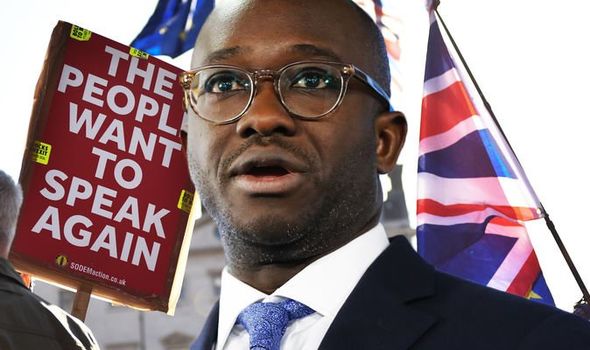 The Remainer announced he was pulling out of the battle for the Tory crown because he failed to get the support he needed to stand. According to party rules, lawmakers must have the backing of eight MPs to be able to run the the race. The 1922 committee announced this afternoon that 10 candidates had secured the required number of endorsements and the first ballot to whittle the contenders down to the final two will take place on Thursday morning.

The MP for East Surrey said he believes he was too late declaring his intention to run to afford him enough time to get eight people behind him.

Mr Gyimah said: “I entered the Conservative Party leadership contest to broaden the debate and bring the diverse view of millions on Brexit to the fore.

“It has been a tremendous privilege to be able to make the case for a new referendum as a credible solution to break the Brexit deadlock.

“I am hugely appreciative of the support I have received, both in public and in private.

“But I have reached the conclusion that, having entered the race at such a late sage, there simply has not been enough time to build sufficient support, and I have decided to step back.

“I wish all the contenders the very beast at this challenging time as they make the case to take our country forward.”

The contest to find the next Conservative party leader heated up today with the announcement of 10 names who made the cut.

Mr Gyimah, a former university minister, backed a so-called “People’s Vote”, saying a “final say on the Brexit deal” is the only way of breaking the parliamentary deadlock.

In an interview on Sky News, he said he would put three options on the ballot paper – no deal, Theresa May’s deal and a remain option.

Theresa May resigned as Prime Minister last Friday but will remain in office in a caretaker role.

A new prime minister is expected to be in place by the end of July, before MPs go on their summer holidays.