The contest was one of the most expensive Senate races in the country’s history — tens of millions of dollars in ads blanketed the state’s airwaves — framing the stakes: With Mr. Hawley’s victory, Republicans completed a rapid takeover of a onetime swing state and padded their majority in the Senate.

Mr. Hawley, the state’s attorney general, will be 39 when he is sworn in, making him one of the Senate’s youngest members. His conservative intellectual stature, Republicans believe, has the potential to leave a lasting imprint on the Senate for years to come.

A former Supreme Court clerk and law professor, Mr. Hawley was one of the Republicans’ most prized Senate recruits. The state party cleared the field for his nomination, but a slow start to his campaign prompted some second-guessing.

Ultimately he prosecuted an aggressive case against Ms. McCaskill, successfully painting her as too liberal for Missouri and plastering his “Fire Claire” campaign bus with photographs of his opponent and the Democratic leaders of the Senate and the House, Chuck Schumer of New York and Nancy Pelosi of California, who are deeply unpopular here. He excoriated her decision to vote against President Trump’s two Supreme Court nominees.

Mr. Trump, whose approval rating is higher than the national average in Missouri, lavished praise and support on Mr. Hawley during the campaign, visiting the state twice in the last week to rally on the Republican’s behalf, including a stem-winding last-minute appeal late Monday night in Cape Girardeau. Mr. Hawley initially kept his distance from Mr. Trump, but he pulled the president close in the campaign’s final months. The strategy appears to have worked. 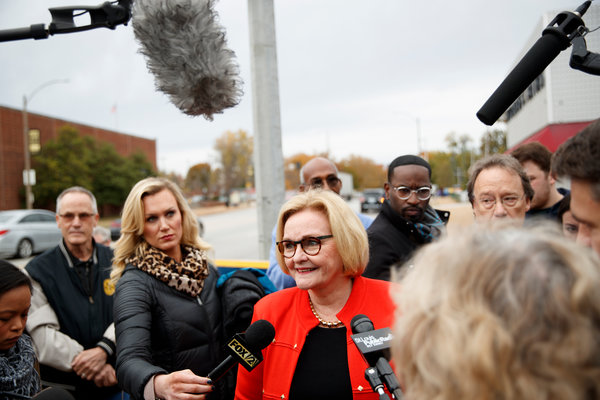 “I like the direction that our country is going in right now,” said Julie Hickert, 53, after casting a ballot Tuesday morning in Chesterfield, a St. Louis suburb. “He is going to continue fighting the fight.”

For Ms. McCaskill, 65, who swept into office amid Democrats’ last wave, in 2006, and was re-elected after a stroke of luck sank her opponent’s campaign in 2012, the undertow of conservative strength here proved too much this time around. Republicans made her one of their top national targets, and hammered away in personal and sometimes visceral terms.

[Follow our live briefing for the latest election updates.]

Ms. McCaskill raised huge sums of money, rallied women in the state’s suburbs and cities, and worked furiously to preserve enough rural support to eke out a win. But it was not enough in Missouri, where Republicans have exploited deep divisions over cultural issues like abortion and race relations to execute a rapid statewide takeover.

Widely regarded as a shrewd campaigner, Ms. McCaskill turned heads in the campaign’s closing days by backing Mr. Trump’s polarizing approach to a caravan of asylum speakers marching toward the Southern border and releasing a radio ad that described her as “not one of those crazy Democrats.” She later elaborated on Fox News.

The ad and backlash against it among liberal and black voters in St. Louis and Kansas City perfectly encapsulated Ms. McCaskill’s challenge in a state that has substantial liberal, urban populations as well as rural and exurban swing voters who have moved toward the Republicans.

In the end, Ms. McCaskill suffered steep losses across the state’s rural interior.

The loss likely marks the end of life in public office for Ms. McCaskill, a singular figure in Missouri politics who began her public career more than three decades ago in a male-dominated State Capitol and outlasted most of her Democratic peers. She has long coveted the state’s governorship, having narrowly lost a bid in 2004, but on Tuesday night, she signaled that she had run her final race, though she said she would be unencumbered in speaking her mind.

“Believe it or not, I’ve really had to be kind of careful,” she told supporters here. “Not anymore. I will be out there fighting with you. I am not going away.”

The results were equally stinging for Democrats here and in Washington. As Ms. McCaskill warned Democratic voters at events across the state in the race’s final days, it may well be a long time before Democrats can compete successfully on a statewide level here again. Senate Democrats will lose an influential voice of Midwestern moderation at a time when the party is still wrestling with how best to counter Mr. Trump’s electoral success in 2020. The loss of Ms. McCaskill and other moderate Democrats, like Heidi Heitkamp in North Dakota and Joe Donnelly of Indiana, is all but certain shift Senate Democrats center considerably leftward in the next two years.