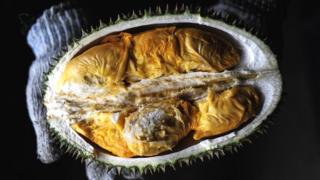 Imagine being trapped in a spaceship with the world’s smelliest fruit.

Thailand’s space research agency has just announced plans to send durian to space by July, as part of a project to produce Thai food suitable for future space travel.

The baked durian will stay in space for five minutes before coming back to Earth, where scientists will see if it has undergone any textural changes.

Durian, known for its strong, stinky smell, is native to South East Asia.

According to local media reports, the fruit will be launched into space via a rocket.

Thailand is not yet in the group of nations to have been to space, but they are making sure the catering is in place for future trips.

“Our main goal is to eventually bring Thai food up to space to be consumed by astronauts,” a spokesman for the Geo-Informatics and Space Technology Development Agency (GISTDA) told the BBC.

“For a start, we chose durian, which is the king of fruits in Thailand. We’d like to send [it] to the atmosphere at the same level that astronauts live and bring them back to analyse their texture for any changes.”

The spokesman said that if the project worked, the agency could “bring other Thai food that is well known, like pad Thai or mango sticky rice, up to space for more tests”.

Durian is well-loved in Thailand but are also found in countries like Malaysia, Indonesia and Vietnam.

Its pungent smell is notoriously powerful – so much so that it is often banned from public transport and other enclosed spaces.

The durian isn’t the first regional delicacy to be sent into space.

In 2008, a South Korean astronaut was sent into space along with kimchi, a fermented homemade cabbage dish that is widely seen as the national dish.