The European Commission President announced she would go into immediate self-isolation as a precaution. The German said she had tested negative for the virus which is currently rampaging through the EU’s institutions. Writing on social media, Mrs von der Leyen said: “I have just been informed that a member of my front office has tested positive for COVID-19.

“I myself have tested negative. However, as a precaution I am immediately leaving the European Council to go into self-isolation.”

Mrs von der Leyen had already arrived at the European Council’s summit alongside the bloc’s 27 heads of state and government. 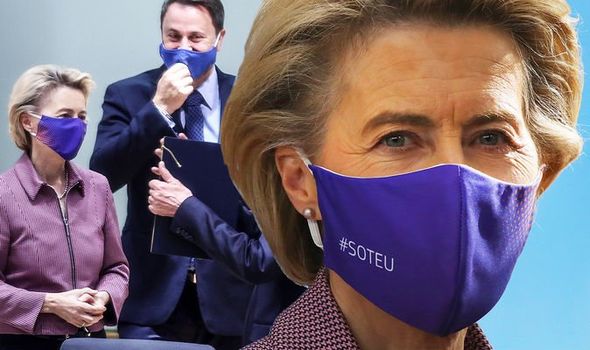 Arriving at the summit, Mrs von der Leyen said: “We will also discuss Brexit. Here, a lot of good work has been done. The European Union is united we have a clear position, we want a good deal, but not at any cost.

“A lot of good work has been done, but two critical issues are still open.

“The one is the issue of the question of the fisheries, and this is a crucial question for thousands of fishermen and fisherwomen. And the second topic is the question of a level playing field, which is crucial. A question of fairness for our companies and businesses in the European Union. I will also present to the leaders.”

This is the second time the EU chief has been forced to self-isolate in as many weeks.

She was in quarantine for just over 24 hours just 10 days ago.

Polish prime minister Mateusz Morawiecki was already forced to pull out of the summit because he is in self-isolation after coming into contact with a member of staff who tested positive for the virus.

And EU officials have had to take extra precautions by enforcing new social distancing rules and mandatory mask-wearing to protect leaders.

Mr Michel, the EU Council’s president, last month was forced to postpone a summit because a member of his security team had tested positive.