Brexit debate in Commons DISRUPTED as protestors STRIP NAKED – ‘Flashers in the gallery!’

The Met has confirmed 12 climate change activists have been arrested for outraging public decency after they stormed parliament and pressed themselves against the glass at the front of the public gallery.

On their bodies were written the words “Climate justice act now” and “eco collapse”.

One shocked user wrote on Twitter: “Flashers in the public gallery.”

The protestors were a mixture of males and females with the majority stripped down to their underwear and glued themselves to the glass.

They were stood at the front of gallery as shocked members of the public watched on.

The protesters had Extinction Rebellion logos painted on their bodies, while some wore masks and body paint.

Police arrived and began carrying protesters out of the chamber after they appeared to refuse to leave voluntarily. 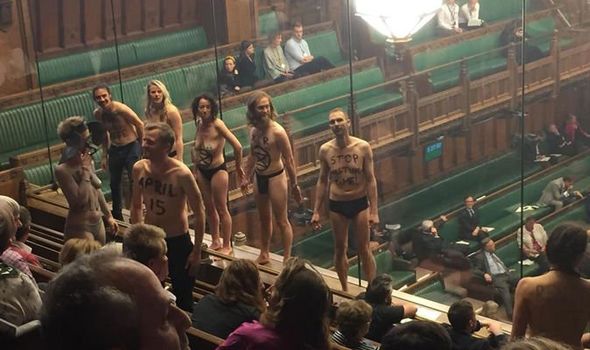 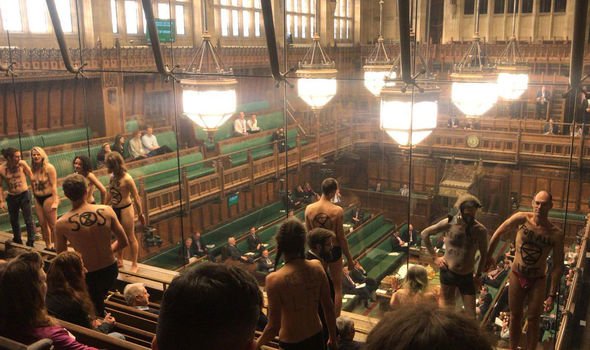 Extinction Rebellion, which describes itself as a non-violent direct action and civil disobedience group, claimed responsibility for the protest.

It wrote on Twitter: “Extinction Rebellion activists strip off in House of Commons public gallery to call attention to the ‘elephant in the room’ – climate and ecological crisis.”

An Extinction Rebellion spokesman said the naked protest was an effort “to try and force the issue up the news agenda as far as possible so it breaks through the Brexit Radar”.

It added: “They have gone in there knowing they will be arrested. They are willingly doing this.” 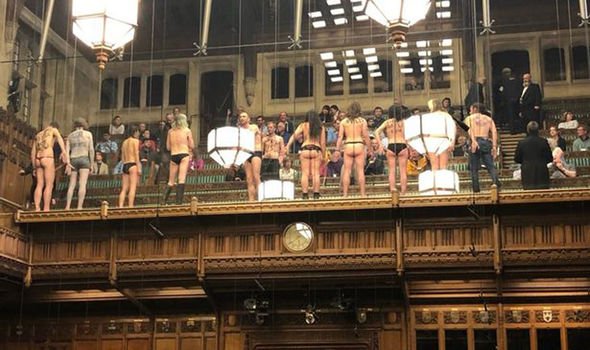 Meanwile one of the naked protesters, said: “A bunch of people glued themselves to the window in the public gallery.

“Everyone stripped and two people were elephants and had climate crisis written on them.

“We were pointing at them as the elephants in the room of the Brexit debate.”

The protest took place as MPs considered the second stage of the Brexit alternatives.

Speaker John Bercow maintained that the debate would proceed despite the protest.

Conservative MP Nick Boles found the funny side of the incident and told the Commons: “It has long been a thoroughly British trait to be able to ignore pointless nakedness.”

Meanwhile Tory Brexiteer Andrea Jenkyns wrote on Twitter: “My god, naked protesters in the chamber! No! there will not be a clothes shortage with No-Deal!

The Met Police has confirmed 12 protestors have been arrested for outraging public decency.