Conflict Strengthens Netanyahu, but the Price is High

He is, in the popular sobriquet, the King of Israel, the “magician” who through his gifts and guile has governed Israel for 15 years in all, outlasting political rivals, waving away corruption charges, sapping Palestinian aspirations and now, again, turning conflict to his advantage.

There is, it seems, no way around Prime Minister Benjamin Netanyahu.

Before the latest violence erupted, leaving more than 230 Palestinians dead and over a dozen people in Israel, Mr. Netanyahu’s situation appeared precarious. It seemed less so after the 11-day battle with Hamas that ended with a cease-fire early Friday.

This is the prime minister’s long-established mode of operation: exploit crisis to assert his centrality and inflict just enough pain on Hamas to deter another eruption for a few years, but not enough pain to change fundamentally a status quo that leaves the Palestinians divided between Gaza and the West Bank, steadily weaker, and stateless.

In early May, talks on a national unity coalition that would have ousted Mr. Netanyahu were advancing. Now that idea, which might have led to an Israeli Arab party entering government for the first time, may be buried in the rubble.

Three days after Hamas began firing rockets from Gaza, Naftali Bennett, the right-wing former defense minister who was a linchpin of the alternative coalition plan, declared, “A government of change with the planned makeup will not be able to cope.” In a crisis that quickly set Jew against Arab within Israel, he could not join a government backed by an Islamist Arab party. Only one person, it was clear, could cope: Bibi, as Mr. Netanyahu is widely known.

The prime minister has put enormous energy and considerable ruthlessness into crafting this image of indispensability, weaving it deep into the Israeli subconscious. His is the baritone that soothes.

Its message is powerful: That he remains the sole guarantor of Israeli security against threats from Hamas in Gaza, from Iran and from Lebanon; that he alone can kick the can of Palestinian statehood far enough down the road for it to appear utterly far-fetched; that only he is a reliable bulwark against “the Arabs voting in droves,” as he once put it; and that, despite being on trial on charges of bribery, fraud and breach of trust, he is best placed to project Israeli interests, with American support, on the world stage. 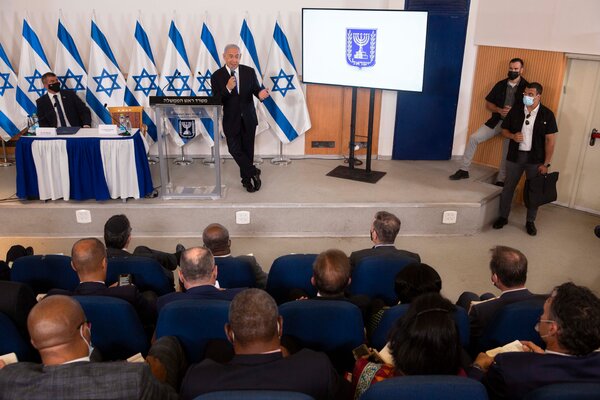 “For an indicted politician, not to lose four successive elections is quite an achievement,” Itamar Rabinovich, a former Israeli ambassador to Washington, said, alluding to the inconclusive votes since 2019 that have allowed Mr. Netanyahu to prolong his rule.

“He has a Trumpian base he can rely on — traditional, conservative, nationalistic — and his perennial question to Israelis, even when he looks bankrupt, is: ‘Who else can do it?’”

Of course, Mr. Netanyahu did not win those repetitive elections, either. He is currently on trial on corruption charges, including bribery. Political survival has become personal, his most effective means of slowing or even stopping the criminal process by somehow persuading allies to grant him immunity. He was unable to form a government after the March elections, leaving him as a caretaker prime minister with diminished legitimacy.

It is unclear, against this backdrop, what role, if any, the prime minister had in the Israeli police raids on Al Aqsa Mosque, the closing of a plaza popular with Palestinians near the Damascus Gate and the plight of six Palestinian families facing eviction in East Jerusalem — the sparks that, in the midst of Ramadan, led to the conflagration.

But it is clear that the ensuing battle benefited him politically.

“Violence returns every few years because of the Israeli occupation of the West Bank,” Ayman Odeh, the head of the joint list of Arab parties in the Knesset, said in an interview. “But the concrete reason this time is that Mr. Netanyahu is willing to burn everything to stay in power. He managed the situation in a way that led to an escalation for his benefit.”

The government insists Mr. Netanyahu did all he could to calm the situation, but finds itself confronted by an implacable enemy.

“When we create collateral damage, something we do our utmost to avoid, we feel guilty and sad,” Tzachi Hanegbi, the minister of community affairs, said in an interview. “We don’t want children killed in Gaza or elsewhere. The Hamas vision is to shoot at civilians and kill as many as possible.”

The deaths in Gaza of more than 60 children have prompted growing international outrage, including within President Biden’s Democratic Party. But Mr. Netanyahu has ridden out such surges of indignation before.

Since taking office in 2009 — he was also prime minister from 1996 to 1999 — Mr. Netanyahu has deftly projected a state of permanent emergency, fanning division and fear where necessary. Israel is “the nation-state, not of all its citizens, but only of the Jewish people,” he famously declared in 2019. About 20 percent of Israel’s population is Arab.

The fear mongering has worked. Nobody can find a way to dislodge the master strategist. Not Benny Gantz, the war hero whose Blue and White Party briefly held out the promise of change. Not Yair Lapid, the telegenic centrist who was the other author with Naftali Bennet of the plan for a national unity coalition. Not rising stars from Mr. Netanyahu’s own Likud party, like Gideon Saar, who find themselves outmaneuvered (Mr. Saar left to form his own party). They all succumb, though Mr. Lapid still has until June 2 to try to form a government even if that now appears unlikely.

Over more than a decade, no more centrist alternative to Mr. Netanyahu, 71, has proved persuasive; no rightist option has been able to outflank him; and nobody has been able to halt the slow demise of the land-for-peace left, which embodied the hopes of a two-state settlement of the Palestinian conflict.

“He is very good at getting out of crisis, sometimes at terrible cost, even to the constitutional order,” said Mr. Avineri. He was alluding to Mr. Netanyahu’s attacks on the Supreme Court and a free press as his hold on power has become more tenuous and his personal situation more fraught.

In some ways, until the latest violence erupted, putting an end to seven years of relative calm with Hamas, Mr. Netanyahu appeared to have succeeded in his core objectives.

His guiding principle, despite a few wan conciliatory gestures, has been no Palestinian state on his watch. The Palestinian national struggle, chronically divided, seemed dormant, with Arab states little moved by it.

He has treated the Palestinian conflict as a problem to be contained, not resolved. Separation supplanted peace as Israel’s aspiration. Palestinians, for many Israelis, underwent an eerie passage into abstraction, and a complacency set in that the problem was under control.

The Abraham Accords between Israel and four Arab states signed last year and broadcast by President Donald Trump as “the dawn of a new Middle East” seemed an effective demonstration of Mr. Netanyahu’s conviction that Israel could integrate in the Middle East while ignoring the Palestinians. Israelis were suddenly free to throng Dubai. The eternal conundrum, the claims of two peoples to the same land, appeared sidestepped.

The simmering unrest in East Jerusalem, the Arab-Jewish mob violence that ripped through Israeli cities and the war with Hamas proved that was not the case. The Israeli-Palestinian confrontation was and remains the core of the conflict, and Israeli prosperity and security are never quite as secure as they may look.

For all his temporary reprieve, Mr. Netanyahu is facing some searching questions.

Determined to keep the Palestinian movement divided between Fatah in the West Bank and Hamas in Gaza, he has allowed over many years substantial Qatari financing of Hamas, in what many observers have seen as an attempt to undermine President Mahmoud Abbas and his Palestinian Authority in Ramallah.

“Netanyahu’s game blew back in his face because they armed themselves to the teeth,” Mr. Rabinovich, the former ambassador, said, alluding to Hamas.

A lot of the Qatari money, it has become clear, went to Hamas’s weaponry, as the sustained bombardment of Israel over many nights confirmed.

A national strike this week by Palestinians in both the West Bank and Israel itself constituted an unusual show of unity, one that could prove hard for Israeli authorities to contain. The battles between Israeli Arabs and Jews in places like Lod have left wounds that will take time to heal.

It was easy for a while for Israelis to forget the long humiliation of Palestinians under Mr. Netanyahu and the bitter fruit it might yield. That is no longer the case.

In the United States, where support for Israel remains strong, a growing number of Democrats in Washington are speaking out against Israel’s harsh treatment of Palestinians. Mr. Netanyahu cannot depend any longer on the uncritical friendship of Mr. Trump.

When the chairman of the Senate Foreign Relations Committee, Robert Menendez, Democrat of New Jersey, issues a statement saying he is “deeply troubled” by the Israeli airstrikes that killed Palestinian civilians, something has shifted, and not in Mr. Netanyahu’s favor.

Yair Lapid, the centrist rival to Mr. Netanyahu, was scathing in an assessment published on his Facebook account. The government, he said, “has failed in all areas under its responsibility. It completely failed in the protection project. In Ashkelon and most of the surrounding communities, people are still sitting in the corridor during a missile attack.”

“It failed disgracefully in public relations,” he continued. And, not least, “It failed in that it preferred to preserve Hamas rule in order to weaken the Palestinian Authority.”

Mr. Netanyahu has survived again but he is not out of the woods. The “melech Yisrael,” the regal magician, is caught in a web of his own creation. 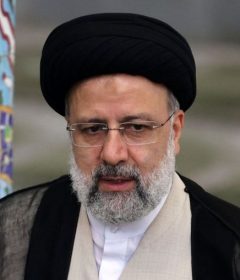 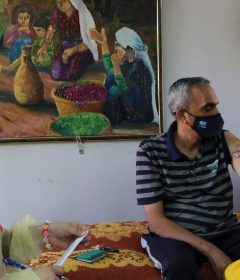