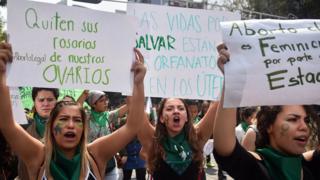 A Mexican woman who miscarried in a department store toilet has been freed after three years in prison.

Dafne McPherson, 29, was sentenced to 16 years after being found guilty of murdering her newborn baby.

Prosecutors accused her of inducing early birth and drowning the baby, but an appeal found the scientific evidence used against her was unreliable.

Abortions were decriminalised in Mexico City in 2007 but are still banned in most Mexican states.

“The only thing I can say to other women who are in my situation is never lose hope,” Ms McPherson told reporters after leaving jail in central Mexico.

“They didn’t do a thing,” she said of the investigation.

“That’s why there are people inside who shouldn’t be in prison.”

Ms McPherson had been working at the Liverpool department store in San Juan del Río when the incident took place four years ago.

Prosecutors accused her of inducing delivery and drowning her baby.

Her lawyer, Aureliano Hernández, said the baby fell into the toilet after she fainted from blood loss, and that the toilets flush automatically.

Her case gained notoriety after videos emerged of prosecutors accusing her during court proceedings of doing something “not even a dog would do”.

In her latest appeal, Ms McPherson’s lawyers provided evidence that the baby’s death was caused by inadequate facilities and a lack of medical attention.

Security staff had prevented a Red Cross ambulance from accessing the store’s parking lot, calling for a private ambulance instead.

They also submitted evidence that, a year earlier, Ms McPherson was diagnosed with hypothyroidism. The disease causes symptoms similar to pregnancy including weight gain, irregular menstruation and fatigue.

Mexican women can face up to five years in prison for having an abortion, and carrying out an abortion can result in an eight-year jail term.