Vizcarra stressed the presidential term could not be extended by ‘political crises, the pandemic or other factors’. 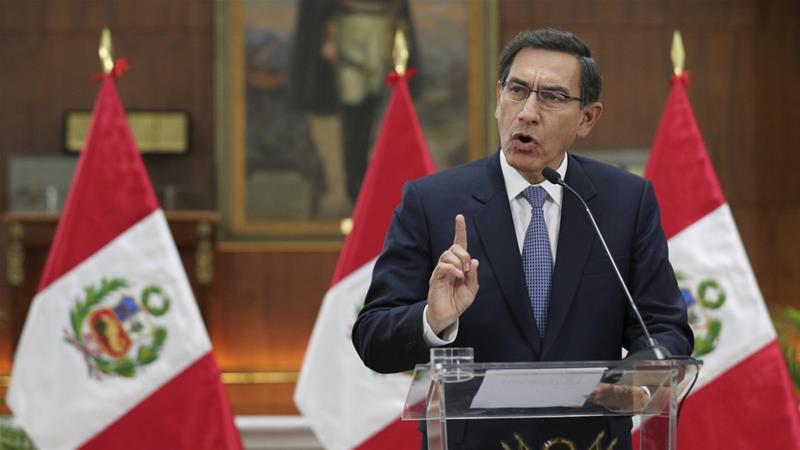 Peruvian President Martin Vizcarra has called for a general election to be held in April next year when he will step down as the country’s leader.

His announcement on Wednesday came after the Congress had discussed the possibility of postponing the elections due to the coronavirus outbreak.

“Fulfilling my commitment, here is the decree calling a general election for April 11, 2021,” Vizcarra said in a televised address, formally marking the beginning of the process to hold presidential and legislative elections.

He stressed the presidential term could not be extended by “political crises, or the pandemic, or any other factor”.

Translation: Keeping my word and my commitment to Peru, I call for general elections to elect our next president, vice-presidents and congressmen for the period 2021-2026. Let’s continue working to strengthen democracy in our country, Vizcarra wrote on Twitter.

If no presidential candidate gains an absolute majority in the first round of voting, the top two contenders will face off in a runoff.

“We are within the terms of the law. From now, in a little more than nine months we will have a change of authorities,” he added.

According to Peru’s constitution, presidents can only serve one, five-year term.

Previously the vice-president, Vizcarra came to power in March 2018 after President Pedro Pablo Kuczynski was forced to resign over a corruption scandal related to millions of dollars in bribes paid by Brazilian construction giant Odebrecht.

Peru is battling a severe outbreak of the coronavirus as it bids to slowly reopen its battered economy. The country of some 33 million people has registered more than 300,000 COVID-19 infections, the fifth-highest number in the world.