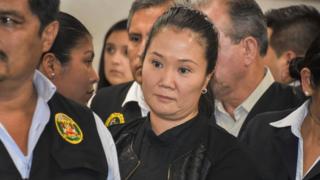 A judge in Peru has ordered that opposition leader Keiko Fujimori spend three years in jail while she awaits trial for corruption.

She denies any wrongdoing and says the accusations are politically motivated.

Judge Concepción said there was a “serious suspicion” that Ms Fujimori was managing a “de facto criminal organisation that is entrenched within” her Popular Force political party.

Ms Fujimori, who was in court, was taken into custody by police after the judge’s ruling.

Her lawyer is expected to appeal against the verdict, AFP reported.

The 43-year-old had already spent a week in police custody earlier this month but had been released on appeal.

She lost presidential election runoffs in 2016 and 2011. Her Popular Force party, however, wields considerable power and currently has a majority in Congress.

In the last year there have been huge street protests against the political establishment.