Guaidó greeted by protests on return to Venezuela 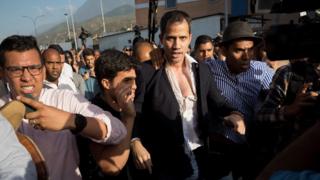 Opposition leader Juan Guaidó was met with protests at the airport after returning to Venezuela from an international support-building tour.

Supporters of President Nicolás Maduro shouted “fascist!”, grabbed Mr Guaidó’s shirt and pushed him in the airport just outside the capital Caracas.

Mr Guaidó, 36, defied a travel ban to go to Colombia, Europe, Canada and the US, and met US President Donald Trump.

He is considered the legitimate leader of Venezuela by more than 50 countries.

However President Maduro, the country’s left-wing leader who enjoys the support of the Venezuelan military, has remained in power.

One of the protesters, who shouted at Mr Guaidó and threw a liquid at him, was wearing the uniform of the state-owned airline Conviasa, which has been directly hit by US sanctions.

There were also scuffles between the protesters and supporters of Mr Guaidó, who had gone to the airport to welcome him.

Lawmakers loyal to Mr Guaidó had to walk to the airport after the bus they were travelling in was stopped by police.

Journalists reported being attacked and having their kit stolen by those who had turned out to boo Mr Guaidó.

Mr Guaidó’s office later said that a relative who was travelling with him had been held by airport officials, and had not been seen since.

“Let’s not get distracted by stupidities, by dummies, by traitors to the homeland,” he said at a ceremony that was broadcast on state television.

The president’s second-in-command Diosdado Cabello also denounced Mr Guaidó’s three-week tour as a “tourism trip”, and said he did not expect anything to change after his return.

“He is nothing,” Mr Cabello added.

The president and his officials have threatened Mr Guaidó in the past, but these threats have, so far, not led to him being harmed or detained.

Despite this being the second time he defied a court-imposed travel ban, Mr Guaidó was not arrested.

After landing, he addressed a rally of about 500 people in Caracas, where he called for renewed protests against the president.

“We came to work and leave the rest, to do what is necessary to accomplish the goal” of ousting President Maduro, Mr Guaidó said.

He also promised that “mechanisms of pressure” against the government would increase, but did not state explicitly what these would be: “There are things we cannot talk about… because we are confronting a dictatorship.”

He has previously indicated that he received pledges on his tour from the US and its allies of stricter economic sanctions against President Maduro’s administration.

During Mr Guaidó’s visit to the US, President Trump promised to “smash” President Maduro’s government.