Home » Latin America » A river of people: The migrant caravan in pictures

A river of people: The migrant caravan in pictures 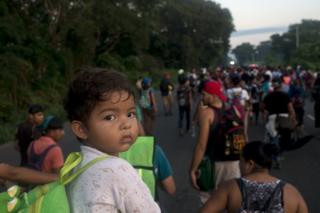 Thousands of migrants from Central America are crossing Mexico from south to north in the hope of reaching the United States.

Many of them are parents with young children seeking a better life away from the violence and lack of opportunities in their home countries.

The size of the group has steadily grown from about 1,000 to more than 7,000, according to a United Nations estimate.

Observers have described it as “a river of people”. Photojournalist Encarni Pindado documented their progress north across the Guatemala-Mexico border. 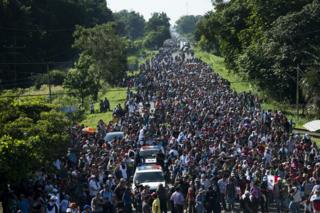 The group left the crime-ridden city of San Pedro Sula in Honduras on 13 October. From there, the migrants walked to Nueva Ocotepeque from where they crossed into Guatemala.

Their aim is to reach the United States where they say they want to start a new life away from the criminal gangs which control parts of Honduras.

But US President Donald Trump, who campaigned on a promise to curb illegal immigration to the US, said he would not let the caravan cross into the US.

He seized on the caravan as an opportunity to rally people to vote for his Republican Party in the forthcoming midterm elections on 6 November.

“Every time you see a Caravan, or people illegally coming, or attempting to come, into our Country illegally, think of and blame the Democrats for not giving us the votes to change our pathetic Immigration laws!” he wrote.

In another tweet, Mr Trump claimed that “criminals and unknown Middle Easterners are mixed in” the migrant group – without giving any evidence of either.

One of the migrants held up a sign reading: “Emigrating is not a crime, let’s be free without borders”. 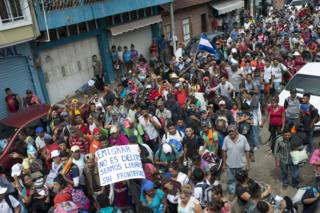 They walked across Guatemala and arrived at the Mexican border last week. Thousands of them headed for the bridge dividing the two countries. 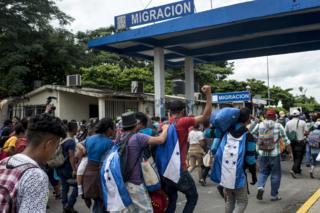 Most of them are from Honduras and some had tied Honduran flags to their backpacks as they got ready to cross into Mexico.

Hundreds of Mexican federal police officers and soldiers were waiting for them on the other side.

The Mexican authorities had previously said that they would stop those who did not have passports or the correct visas.

Border officials started by checking the migrants’ documents one at a time, which meant that by the end of the day only 300 people had been allowed to enter and 5,000 more were still waiting at the bridge. 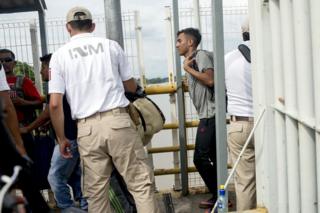 Some of the migrants fainted on the crowded border bridge due to the heat and exhaustion after having walked for six days in a row. 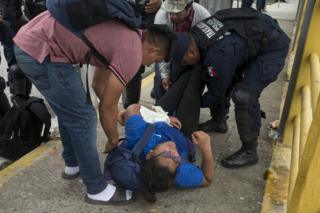 With those on the Guatemalan side of the bridge growing increasingly frustrated at the wait, tempers flared and the two sides clashed, with some migrants throwing stones and police firing tear gas.

Several people were injured and a number of children were separated from their parents in the ensuing melee.

This father managed to hold on to his son and carried him in his arms after both had breathed in tear gas. 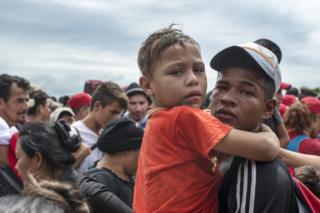 After 36 hours at the border, only 600 people had made it into Mexico via the official checkpoint.

Tired of waiting and increasingly worried they might get turned back by Mexican immigration officials, some migrants lowered themselves from the bridge into the river by ropes while others jumped. 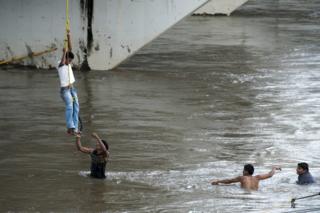 Some were picked up by fellow migrants on makeshift rafts while others swam across the Suchiate river, which marks the border between Guatemala and Mexico. 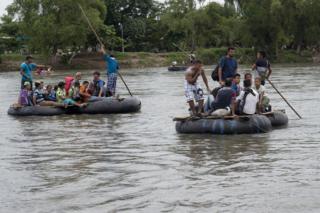 The relief of those who made it into Mexico was great. They gathered in the main square of Ciudad Hidalgo, the city on the Mexican side of the border, and some danced as local musicians played. 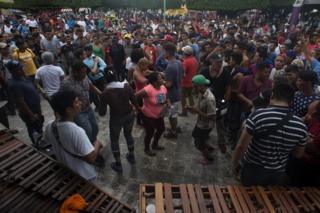 Locals have been helping the migrants. Some have dropped off food and clothes at the squares where they have been sleeping and others have given the most vulnerable ones lifts north in their cars to make the journey a little easier.

However, catching lifts in overcrowded lorries and SUV can be dangerous. Two Hondurans died falling off the vehicles they had boarded, one in Guatemala and one in Mexico, officials said 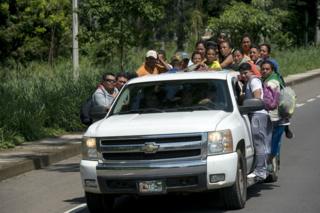 The migrants have been sleeping wherever they can as they move further north. Their journey to the US-Mexican border is expected to take them weeks. 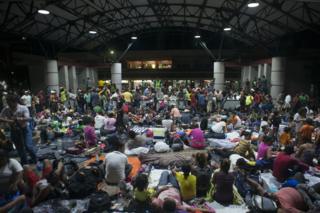