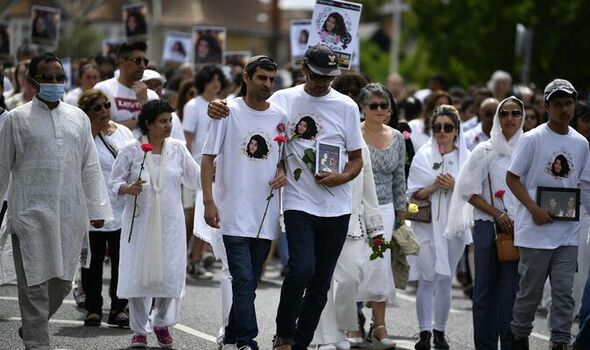 The 35-year-old law graduate was only minutes from her front door when she was attacked while walking along Cranbrook Road in Ilford, east London, on June 26. On Saturday, nearly a week on from her death, a vigil organised by Ms Aleena’s family is taking place to try to bring comfort to her loved ones while highlighting the epidemic of male violence against women and girls.

Many of those on Cranbrook Road have donned white clothing while mourners have left dozens of bouquets of flowers and cards in tribute to Ms Aleena.

Roads have been closed in the area to allow the crowd to walk the 10-minute journey from the scene of her attack to her home.

Speaking to media on Friday, Ms Aleena’s aunt said her niece had been in her own local community, in an area she knew well where she felt safe, when she was attacked.

Farah Naz said the family was determined to try to “change something” and compel the political leaders of Britain to act “right now to prevent violence”.

She said: “(My niece) was not ignorant to the fact that women get hurt. This isn’t about making the streets safe, it’s about changing the mindset.”

Weeping, Ms Naz added: “We will never get through this, but it (the walk) will help us.”

The vigil is taking the form of a silent walk that traces the route Ms Aleena had been taking but never got to complete, “to bring her back where she belonged safely”.

Those attending the vigil met at 1.30pm opposite Cranbrook Rise on Cranbrook Road in Ilford, commencing the walk at 2.17pm – the time in the morning on June 26 Ms Aleena was attacked.

Her family have requested attendees wear white and remain “silent and sombre” as “we walk Zara home in our hearts”.

In anticipation of the silent vigil for Ms Aleena, women have been sharing photos of their shoes to social media with the hashtag #SafelyHomeInOurShoes.

The Londoner had been returning home from a night-out when she was dragged, kicked and stamped on, prosecutors said.

A post-mortem examination found she had suffered multiple serious injuries.

He entered no pleas and was remanded in custody.