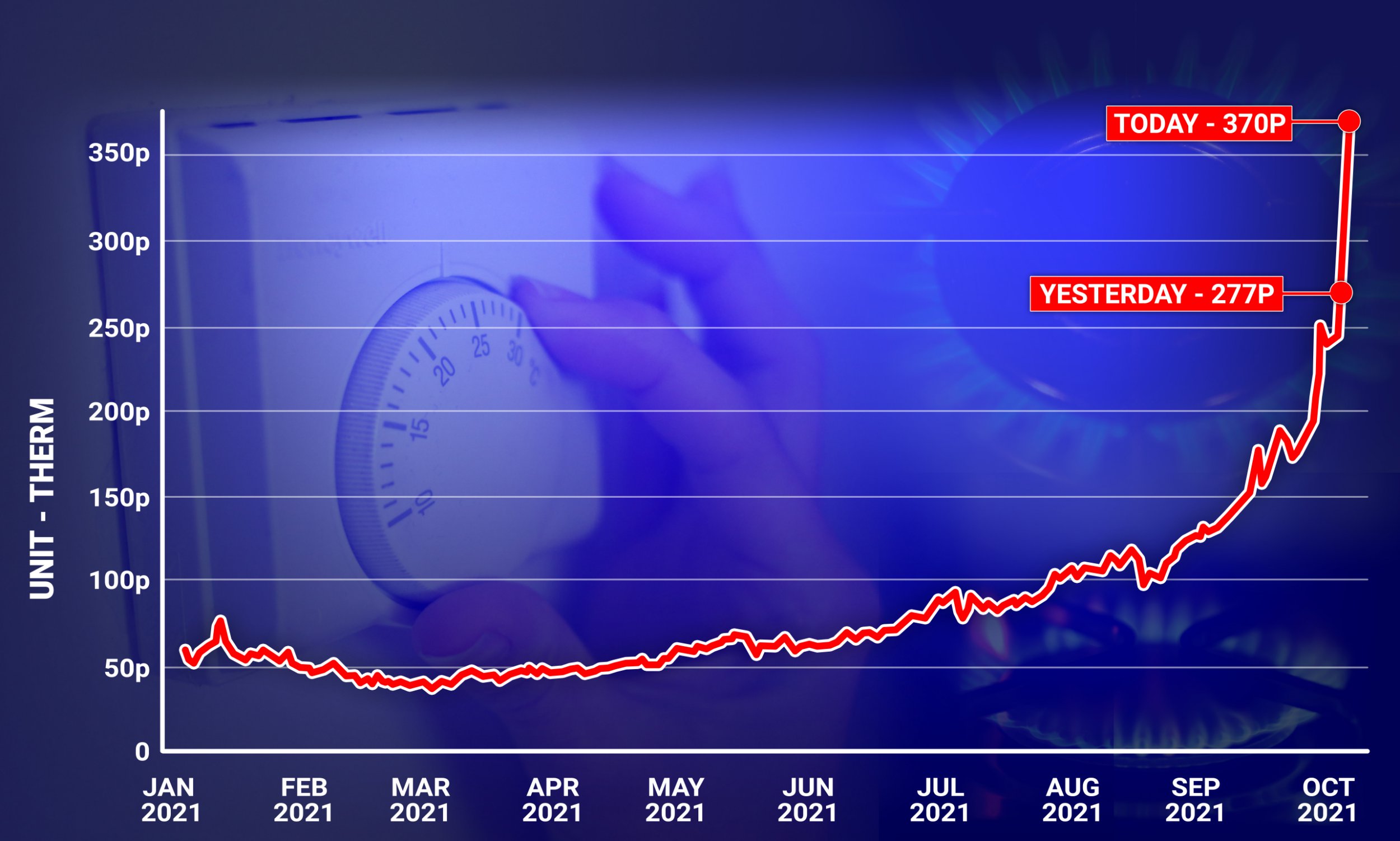 Energy bills are set to rise by more than £500 a year, gas industry experts are warning.

With a bleak winter looming for Brits, one analyst said he expected an ‘explosion’ in prices which will set many people back hundreds of pounds.

It comes as the price of gas reached around 400p per therm – the first time it has reached that level – amid concerns of a cold European winter and supplies from Russia.

The price was just 150p a month ago, and jumped a fifth in 24 hours – a cost currently hitting suppliers which is likely to be passed on to consumers in the coming months.

Joe Malinowski, founder of TheEnergyShop.com, told MailOnline: ‘As things currently stand, we are headed for another increase of at least £500.

And customers of small energy firms could face even bigger increases if their supplier fails.

Mr Malinowski warned that ‘energy suppliers are falling like dominos’ and without political action ‘the outcome will be terrible for consumers’.

Various suppliers have already gone bust in the UK.

Other analysts predicted that Brits would see their energy bills rise by 30% next year.

Research agency Cornwall Insight predicted that gas prices and the further collapses of suppliers could push the energy price cap to about £1,660 in summer.

The forecast is approximately 30% higher than the record £1,277 price cap set for winter 2021-22, which began at the start of October.

It comes amid a surging cost in the price of wholesale gas – and as Britain faces a wider cost of living crisis.

There are petrol shortages and some empty supermarket shelves because of a shortage of HGV drivers, worsened by the Covid crisis and Brexit.

Meanwhile, the Government has slashed the temporary uplift in Universal Credit, making claimants £1,000 a year worse off.

But the Prime Minister Boris Johnson barely mentioned the various crises in his speech to Conservative Party conference yesterday.

There is an energy price cap which means consumers who stay with firms that don’t collapse and already charge the maximum will not see their cost go up straight away.

But energy regulator Ofgem reviews the cap every six months, and changes it based on the cost that suppliers have to pay for their energy, cost of policies and operating costs, among other things.

In a statement to the BBC, Ofgem acknowledged it was a ‘worrying time for many people’.

The regulator explained: ‘The energy price cap covers around 15 million households and will ensure that consumers don’t pay more than is absolutely necessary this winter.

‘However if global gas prices remain high, then when we update the price cap unfortunately the level would increase.

‘Any customer worried about paying their energy bill should contact their supplier to access the range of support available.’

Dale Vince, founder of green energy supplier Ecotricity, said it ‘doesn’t make sense’ to have a retail price cap but not a wholesale one, and accused the Government of ‘killing energy companies right now’.

He told BBC Radio 4’s Today programme that the Government should ‘either let it be a free market, or nationalise it’ – agreeing that there was a compelling argument to bring the industry under state control.

Labour’s Shadow Business Secretary Ed Miliband said: ‘Britain’s businesses and consumers are paying the price for the failures of this government.

‘The UK is particularly vulnerable to increases in gas prices because the Government allowed our gas storage facilities to close, blocked onshore wind, cut solar subsidies, stalled our nuclear programme, and because of their total failure to deliver a long-term plan for energy efficiency.

‘And now the Government remains in total denial about the scale of the energy price crisis facing consumers and firms. The Prime Minister needs to stop with the bluster, and get a grip of the cost of living crisis facing our country.’