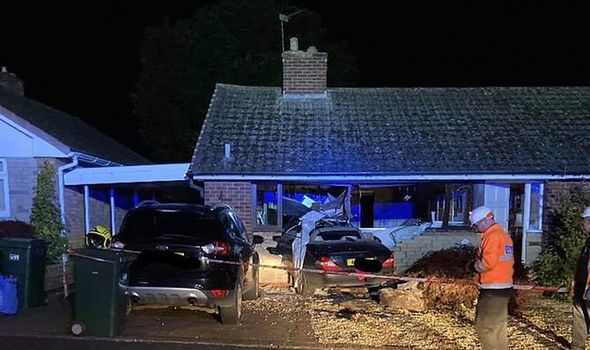 Somehow the elderly homeowner and the male driver both escaped the horror with minor injuries last night. Emergency services dashed to the scene in rural Bridgnorth, Shropshire, at around 8pm and found the black Mercedes had left a gaping hole in the front of the property.

The house had crumbled to the ground and the woman inside was traumatised, firefighters said.

The initial caller administered her first aid and then “gave a full and informative handover” to teams from four fire crews, reports Birmingham Live.

Bridgnorth Fire Station posted on Facebook saying: “At 20.05 yesterday evening we were alerted to reports of a road traffic collision between a vehicle and a building on Princess Drive.

“The vehicle has impacted the building causing considerable damage to the front face of the property.

“Once on scene crews quickly made the building and vehicle safe. Delivering trauma care to the driver as well as comfort and support to the elderly resident who was in the property at the time of impact.”

It added: “We were supported by our colleagues from Much Wenlock and Wellington, as well as police and ambulance.

“Our thanks to the initial caller, who rang 999 after witnessing the impact. Giving full and correct details to our fire control while dealing with first aid and making contact with the occupier all on her own. She then gave a full and informative handover to our incident commander allowing him to make the required operational decisions.

“Communication and keeping clam in a stressful situation are skills rarely used by members of the public but can make a massive difference.”

Shaunna Farley, spokeswoman for West Midlands Ambulance Service, said: “We were called at 8.10pm to reports of a road traffic collision involving a car that had collided with a building on Princess Drive, Bridgnorth.

“One ambulance and a paramedic officer attended the scene. On arrival, we discovered two patients. The first, a man, the driver of the car, was assessed at the scene and had sustained non-life threatening injuries and was conveyed to Royal Shrewsbury Hospital for further treatment.

“A woman, who was in the building was also assessed at the scene, she was discharged on scene with self care advice.”