At the time, the royal couple expressed their desire to “become financially independent, while continuing to fully support Her Majesty the Queen”.

While the move is understood to have come as a major blow to the Royal Family, a source has suggested there was also a sense of relief after Harry and Meghan moved away from the UK.

The royal rift did not, however, come to an end after the move to California. 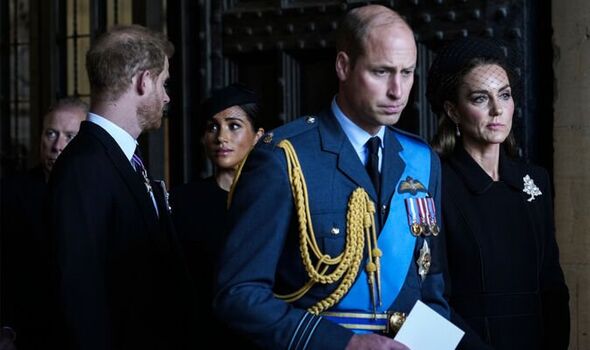 Vanity Fair Royal Correspondent Katie Nicholl commented that the family’s trust in Harry was “shattered” after he and his wife criticised numerous aspects of the Firm in a 2021 Oprah Winfrey interview.

The Prince’s absence at the memorial service for Prince Philip, Duke of Edinburgh, is also understood to have been considered a “snub”.

In his first speech as King, Charles III made special reference to his youngest son and his wife.

He said: “I want… to express my love for Harry and Meghan as they continue to build their lives overseas.”

Ms Nicholl commented that the monarch is “said to desperately want to reconcile with his son”.

But commentators suggest the route to such a reconciliation remains unclear.