It shows diners happily grazing on their dinners as waiters walk by in the background.

But the footage has now become the centre of an eerie scandal, involving a man thought to have been dead for nine years.

The video had been posted to the Spice Cottage Facebook page with the caption: ‘Join us for a perfect blend of exquisite flavours, with classical and unique dishes inspired by ancient family recipes.’

One woman, Lucy Watson, frantically commented: ‘How old is the footage? My late husband and his son are on the first shot and he died in 2014??’

A reply from the restaurant stated: ‘Hi Lucy, sorry to hear this. This footage was recorded last week.’

But Lucy, 59, is adamant there is no mistake – and says it is her husband Harry Docherty and his son Alex in the clip. 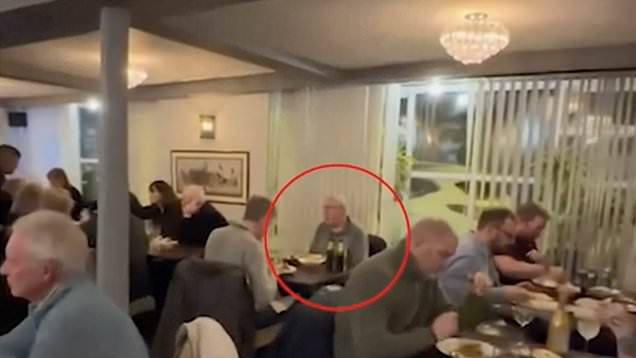 She told MailOnline: ‘I don’t really use Facebook apart from snooping on friends or catching up with people. I was scrolling through and the video popped up.

‘The moment I saw the thing I thought “Oh my God – that’s Harry”. It was so instant. I didn’t even have to think. He’d be eating a chicken korma because that’s all he ever ate.

‘There was no doubt in my mind it was my husband. I couldn’t pause the thing so I had to replay it about 30 times and each time I was surer and surer.’

Harry, who became known for his coverage of the Troubles in Northern Ireland, had a decorated career as a reporter and music journalist.

Lucy told MailOnline: ‘Harry died in 2014 – there’s absolutely no doubt about that.

‘He was seriously ill in hospital for the last few months. They were going to do a liver transplant but he didn’t make it.

‘He was as skinny as anything before he died so the video must have been taken some months before that.’

Social media users had flooded to Lucy’s post with more than 100 comments swapping theories about the bizarre masala-based mystery.

Kristian Hill made a reference to John Darwin, who faked his death for a life insurance scam in an apparent canoeing accident in 2002.

Kristian wrote: ‘Lucy Watson we need an update! Was his body ever found, or just a canoe?’

Neil Burr riffed: ‘He wasn’t dead. He was just in a korma,’ and Tyler Miah joked: ‘Curry so good this lady’s late husband came back to life for it.’

Kiran Singh asked: ‘Maybe he was vindaloo all this time?’

Joker Wayne Bolton added: ‘I was there on this day and the flat bread that I ordered arrived after our main course, it was my late naan.’

John McGahey added: ‘What a saaga!’