Home » Europe » Who will take IS fighter and his London ‘jihadi bride’?

Who will take IS fighter and his London ‘jihadi bride’? 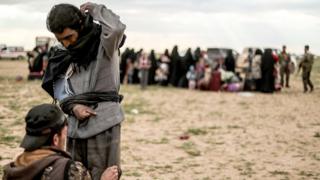 Yago Riedijk was born and raised in well-to-do Dutch suburbia but abandoned it all in his early twenties for so-called Islamic State (IS).

Old pictures show a smiling teenager perched behind a child on a motorbike. A smattering of hairs on his chin suggests he is cultivating a beard.

He left the Netherlands in 2014 and faces a six-year jail term for joining a terror organisation.

You may be familiar with his jihadi bride, Shamima Begum from east London who is believed to have “married” him a week after she arrived inside IS territory aged 15.

They now face an uncertain fate.

Riedijk was one of 300 Dutch men and women who travelled to Syria and Iraq. Some 135 Dutch nationals with “jihadist intentions” are still there, anti-terror officials say.

It is not known how many want to come back and if Riedijk is one of them. And it is not clear if they can.

Authorities across Europe are alive to the threat of returning jihadists:

As IS began to crumble, he and Shamima Begum escaped the town of Baghouz to protect their unborn child.

Riedijk, now 27, is held in north-eastern Syria while she was in the sprawling al-Hawl refugee camp – temporary home to 39,000 mostly women and children – but has now reportedly gone elsewhere. 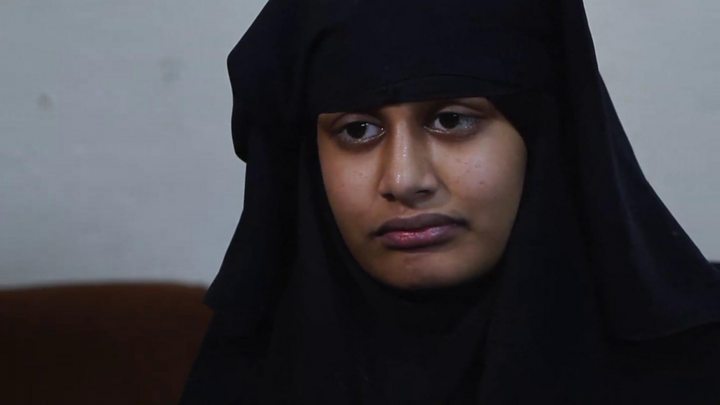 When the UK revoked her citizenship, she raised the prospect of applying for Dutch nationality through her “husband”.

Will they be allowed in?

Although Riedijk is on a terror watch list his citizenship has not been revoked. If he made it to a Dutch embassy or consulate, in theory he would be allowed to return home.

Shamima Begum will struggle to get her underage union recognised in the Netherlands, but their newborn son, Jarrah, may be entitled to Dutch citizenship.

There are as many as 170 children in Syria who could lay claim on Dutch nationality.

Only this week the Dutch justice department warned of the threat posed by jihadist women returning from abroad, as well as by boys older than nine years old.

Even women and children who were not trained and did not take part in hostilities could pose a “long-term potential threat” because of exposure to IS ideology, it said.

How a city’s teenagers were targeted for jihad

Jimmy’s cafe nestles on a neat shopping precinct close to where Riedijk grew up, in the eastern city of Arnhem.

Softly spoken owner Jimmy gestures to the table where Riedijk and his friends used to gather.

Two men in their twenties talk candidly of friends seduced and conscripted by a brutal death cult.

Frustrated their city has been christened the Netherlands’ “jihadist capital”, they blame Dutch society for failing to stop “good kids” from being groomed.

“They were kick-boxing, deejaying but then they stopped seeing opportunity here in the Netherlands,” says one.

“Guys started coming to our mosque, preaching, and the boys started to break away, become more extreme in their thinking, they were meeting in apartments and then we hear they’ve gone.”

Their experience tallies with the findings of a study that pinpoints a period in 2013 when radicalisation in Arnhem reached its peak.

Recruits often suffer from low self esteem and are searching for a stronger identity, says Barbara Klunder who has represented a number of young Dutch jihadist suspects.

“It’s not so much religious, but more a feeling of belonging and being fully accepted by their own people fighting the same enemy.”

The spotlight returned to Riedijk’s hometown last autumn, when seven men were arrested at a holiday park in the southern town of Weert.

Leaked photos appear to show them kissing Kalashnikov rifles, posing in bomb vests, and preparing to carry out a terror attack at a rock festival in Arnhem with the aim of “creating as many casualties as possible”, in the words of the Dutch prosecutor.

Six men between 21 and 35 who either came from Arnhem or lived there remain in custody awaiting trial.

Another element in the Arnhem terror cell case is Riedijk himself, as he is suspected of being linked to the group.

With a jail sentence awaiting him, it is unclear whether he will come back. His parents have declined to comment.

Patrick, a childhood friend, describes him as “one of the quiet people in class”. Shocked by his departure, he believes Riedijk should be brought home and locked up for life.

Dutch justice officials will be taking no chances.

What other EU member states decide to do regarding repatriation is up to them, but that does not mean the Netherlands has to follow, says the National co-ordinator for security and counter-terrorism.

Arnhem Mayor Ahmed Marcouch believes he should be brought home to face justice. “We will continue to guide him and keep an eye on him,” he told a local paper.

But he does not want Shamima Begum to come. “You cannot be eligible for a residence permit when you have committed terrorist crimes.”