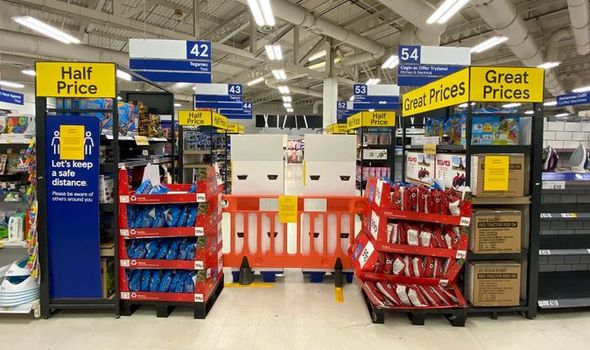 The “firebreak” for the entire country came into effect at 6pm yesterday, with people being ordered to stay at home and most shops told to close.

Supermarkets were banned from selling goods not deemed to be essential, although exactly what these were was not spelled out. It led to scenes where shop workers were sectioning off aisles selling bedding, clothes, phone chargers and kettles.

But many residents are baffled by what they can and can’t buy – and there are fears of the return of “trolley police” snooping at their shopping.

Meanwhile police checkpoints are being set up on a key section of the Wales-England border, with Gloucestershire Constabulary stopping and questioning people travelling into Wales.

If officers “are not satisfied with their explanation” as to why they are on the road, they will be “encouraged” to turn around. If they don’t, forces in Wales will be alerted so they can fine the “offenders”.

The drastic measures in Wales came into force soon after Scotland’s Nicola Sturgeon unveiled a five-level tier system for her country. The top level is tougher than the highest of England’s three tiers. 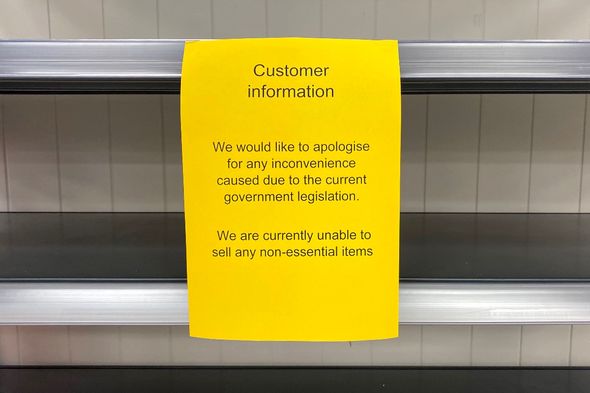 It involves the closure of all bars, restaurants, leisure venues and non-essential shops; strict controls on travelling and using public transport; and potentially a “stay at home” message similar to that which came into force inWales yesterday.

Ms Sturgeon said schools would remain open if possible and people would still be able to meet outdoors, adding that ministers would try to avoid the heavy restrictions imposed in Wales. She said: “We are not back at square one. We have made progress in tackling the virus and we have more tools at our disposal now to control it.”

Scotland’s coronavirus infection and fatality rates have risen to levels last seen in May. Data showed 18 people had died in the past 24 hours, with 975 people in hospital, up by 41, and 76 people in intensive care, up by two. There have been 1,401 new cases, bringing the total to 54,016.

Ms Sturgeon was accused of using “manufactured grievances” over coronavirus in her fight for Scottish independence after she claimed that Scotland could run out of money to prop up businesses without a massive cash injection from Westminster.

Scotland has already received £6.5billion from the UK Government, more than half of all the Covid cash given to devolved administrations.

Back inWales, health minister Vaughan Gething made clear that alcohol was a key item – but clothes were not. He conceded it would be impossible to create a “line by line” list of what could be sold, hoping retailers would have a “grownup understanding”.

But Sara Jones, head of the Welsh Retail Consortium, said: “Compelling retailers to stop selling certain items without them being told what is and what isn’t permitted to be sold is ill-conceived.”

And Andrew RT Davies, of the Welsh Conservative Party, tweeted: “Is a flagon of Strongbow deemed essential?

“What about some muchneeded underpants if you’re caught short?”