Home » Europe » Unknown warrior: Why the identity of hero soldier has remained mystery for 100 years

Unknown warrior: Why the identity of hero soldier has remained mystery for 100 years

Wives, sweethearts, mothers and fathers stood in silent tribute to this one soldier who would stand for all those they had lost. With heads bowed for the 19-gun salute, they seized the nearest thing they would ever get to a goodbye – believing in their hearts the serviceman in the flag-draped coffin might just be the beloved boy they had waved off to war. As he travelled by train from the Kent coast to his final resting place in London, crowds of mourners turned out at every station to bow their heads in salute.

A plaque still in place at Victoria Station reminds commuters of the moment the nation’s son arrived amid scenes in which “men wept”.

Since then, millions of visitors have walked past the soldier’s grave “among kings” in Westminster Abbey, yet much of the full story of how he came to be placed there 100 years ago today remains unknown.

His story is as poignant as poppies at the Tower of London and as powerful as the poetry of Wilfred Owen.

It all began with a vicar from Margate, Kent, the Rev David Railton. In the darkest days of the First World War, he was serving as an Army chaplain on the Western Front, and was struck by the aching sadness of a lone cross bearing the words: “An Unknown British Soldier”.

Acutely aware of the impact on families back home left with not even a body to bury, he decided that bringing just one unknown serviceman back to Britain – a man of any rank – would have powerful resonance in a shell-shocked society. 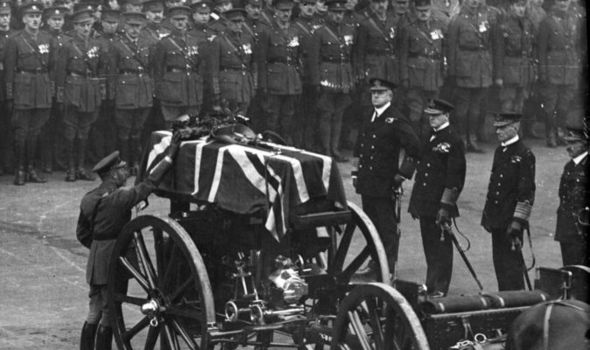 Buried in a public space, his grave could provide a little comfort to those legions left behind – the mothers, fathers, siblings and sweethearts – but, in particular, to loved ones who’d suffered the painful moment every family feared: a telegram committing them to a lifetime of not knowing the fate of their son.

The idea was supported by the Daily Express. The edition of October 25, 1919, asked: “Shall we show peculiar honour? to the dust of one unnamed private soldier as a symbol of all who died to win the war? Should the grey Abbey, brooded over by the spirit of England, or the cathedral where Wellington lies, receive him?”

Yet initially at least, not everyone agreed. King George V was amongst those concerned that to stir up emotions after the war would risk damaging national morale.

In reality, despite Allied victory, with 886,000 casualties, morale was already on the floor. And gradually it was accepted that this was what the nation needed.

A military operation swung into action to exhume a selection of unidentifiable bodies from the battlefields of France and Belgium, choose one at random, and carry him home across the English Channel, before laying him to rest with full battle honours in the country’s highest house of God, Westminster Abbey.

The man charged with the key part of the plan was Brigadier General L. J. Wyatt, Director General of the Department of Graves Registration and Enquiry. He was tasked with selecting a British soldier whose corpse was so decomposed there was no possibility he could ever be identified.

It was an operation undertaken with great care and secrecy, each player aware only of their part and no one else’s, in the hope nobody involved would ever be in a position to whisper.

As such, just a few short days before Armistice Day 1920, a selection of unidentifiable British bodies from different areas of the Western Front were brought to Wyatt at St-Pol-sur-and in Ternoise Chapel in Northern France, where, at the stroke of midnight, he placed his hand on one of them and had him transported to Boulogne-sur-Mer and the awaiting destroyer HMS Verdun.

“I had no idea even of the area from which the body I selected had come? no one else can know it,” revealed Wyatt almost two decades later, hopeful his version of events would end constant speculation over the Unknown Warrior’s true identity. 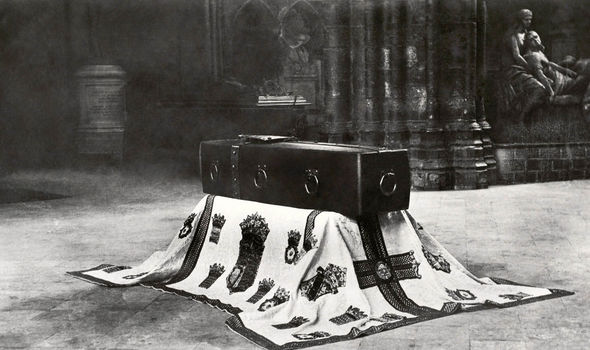 Grief in 1920 was a very private thing which took place behind closed doors with a stiff upper lip maintained in public. Yet when the Unknown Warrior, in his coffin crafted in English oak from Hampton Court Palace, approached British soil, there to greet him in Dover were thousands upon thousands of bereaved families. Heads bowed for the 19-gun salute, the silent onlookers stared across the Channel from the famous white cliffs, the living, breathing, weeping collateral damage of war.

Wreaths and coffin unloaded, the procession headed along the quayside to the awaiting luggage carriage – painted white for ease of recognition and hooked on to the 5:50pm Dover to Victoria boat train.

As it pulled away – with an officer and 15 other ranks from the 2nd Battalion Connaught Rangers on board to escort the body to London – a Guard of Honour from the Connaught Rangers presented arms, with the Royal Irish Fusiliers following suit at Dover’s harbour station moments later.

At every station along the Unknown Warrior’s route, thousands more people stood to attention, caps and hats off. 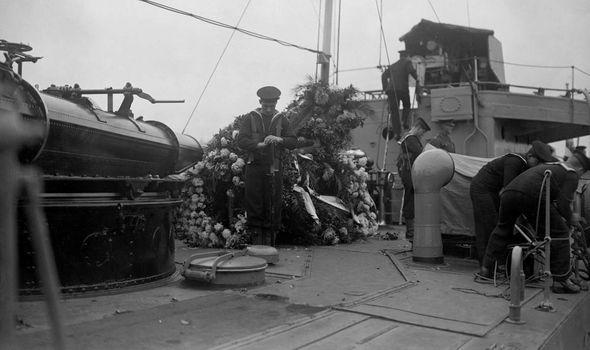 After an overnight vigil at Victoria Station, on November 11, 1920 – two years to the day since the guns of the “war to end all wars” fell silent – our Unknown Warrior processed through the crowded streets of the capital. He was accompanied to Westminster Abbey by a firing party, gun carriage, six black horses and a series of distinguished pallbearers from the Royal Navy, Army and Royal Air Force.

The solemn ceremony followed two minutes of silence and was attended by King George, Queen Mary, distinguished guests, a group of about 100 bereaved wives and mothers and, of course, by the Rev David Railton himself.

The Unknown Warrior was then buried in soil brought from all the main battlefields, and his grave was later finished with black marble. In the first week alone, more than a million visitors made a personal pilgrimage to pay their respects.

Today, 100 years on, the passage of time has unearthed some previously unknown details, shedding light on the mysteries and myths that have always surrounded this story – and questioning some aspects of the account historians to date have always taken as gospel: General Wyatt’s. 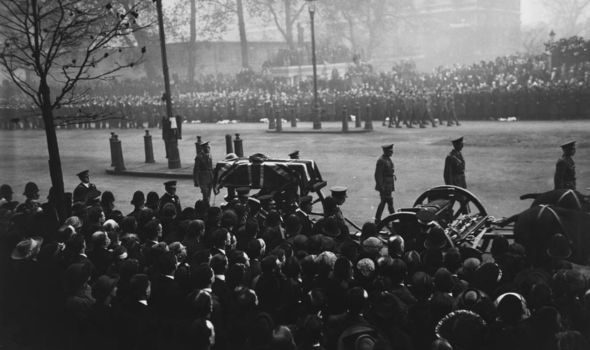 Though he may have taken secrets to his own grave when he died in the 1950s, recent research suggests not only that the selection of the body was made at midnight on November 8, 1920 (not the 7th, as Wyatt claimed), but that a question mark remains on the fate of the three unselected bodies.

Though Wyatt claimed they were reburied at St Pol cemetery, recently uncovered accounts of officers involved in the reburial may cast doubt on this statement.

St Pol cemetery does not contain three unknown graves, and a trail now leads instead to another military cemetery, with researchers pinpointing a location – with neither headstones nor crosses – where the three may lie.

Regardless of the detail, the Unknown Warrior leaves a mark like no other: he inspired other nations to have their own symbolic soldier, a royal tradition – initiated by the Queen Mother whose own brother perished in the conflict – to have every royal wedding’s bridal bouquet left on the grave, and he continues to inspire the millions of visitors who come through the doors of Westminster Abbey. 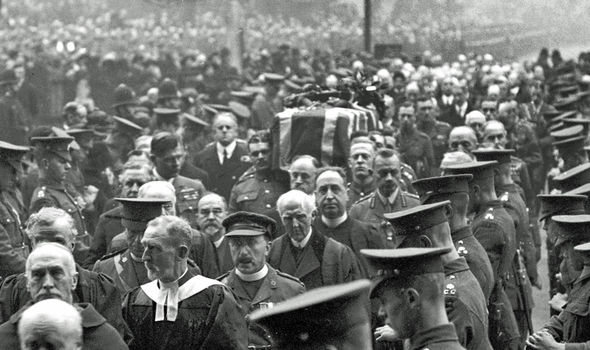 So that’s it. The unknown story of the Unknown Warrior, one I’ve come to know so well that when I pause to think of him – or pass his grave – I’m sometimes tempted to give him a name; is he a Wilfred, I’ll wonder, an Edgar, a Cedric, a Frederick?

Maybe he was born with another classic Tommy name among the many I’ve run my finger over on a war memorial on the list of lost lads.

But when that thought creeps in, I push it away as quickly as it came? It’s the whole point, is it not, that the Unknown Warrior remains nameless?

We can’t know his true identity, because in knowing we would take away the little bit of him that belongs to all of us in eternal remembrance.

He’s the great historical mystery no one should ever try to solve.