TV news last and firsts for BBC in Cardiff

It is a landmark day for BBC Cymru Wales as TV news teams say farewell to their old home, and hello to a new HQ.

The flagship Wales Today delivers its final breakfast bulletin at 09:00 BST from studios in Llandaff.

The Welsh language Newyddion team then takes to the air from Central Square on Monday afternoon, before Wales Today settles in for its evening programme. 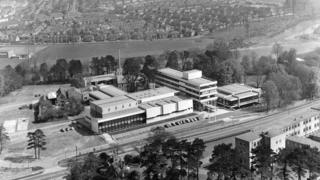 “Llandaff has been at the heart of national life for more than half a century – a crucible for writers, performers, journalists and some of the most gifted programme-makers this nation has produced,” he said.

“But, as they say, to everything there is a time.

“And the time is right to open an exciting new chapter at our new home in Central Square – a centre that will bring us closer to audiences and provide an extraordinary stage for Welsh broadcasting for decades to come.”

The very last evening news programmes came from Broadcasting House in Llandaff on Friday – after being home to BBC Wales since 1966.

It was officially opened by Princess Margaret in 1967 and has been home to BBC Wales’s radio stations – BBC Radio Cymru, BBC Radio Cymru 2 and BBC Radio Wales – as well as TV news programmes BBC Wales Today and Newyddion, along with digital services.

The Llandaff building has seen the stars of stage and screen tread its famous corridors; including Sir Anthony Hopkins, Catherine Zeta Jones, Sian Phillips, Ryan and Ronnie, Joan Collins and even Dirk Bogarde.

It has been home to the BBC’s longest running television soap opera, Pobol y Cwm, and was where Doctor Who was regenerated, bringing the Time Lord back to life for a new generation.

But its age – and ageing technology – meant it had become “entirely unfit” for modern broadcasting, according to the BBC Wales director.

The new base in Central Square is the first in the UK to use IP [internet protocol] technology, and is considered to be the most advanced broadcast building in Europe.

IP will bring the latest internet technology into different aspects of production, including allowing different devices dotted around the building to recognise and “talk” to each other.

The first TV programme to be broadcast from the site a week ago was coverage of Wales women’s football match against Norway, presented from one of the new studios.

“It’s an incredibly exciting time to be part of the move to our new studios,” said Nick Servini, who becomes the first Wales Today presenter to broadcast the programme from Central Square.

“Obviously it’s all happening at an unprecedented time for news, but we believe we will be able to keep people better informed about all the latest developments on the biggest stories with the new technology available to us in Central Square.”

Bethan Rhys Roberts will present the first full new Newyddion programme from BBC Cymru on S4C from the new HQ on Monday evening.

“The team is so excited about going on-air in our new home,” she said.

“At such a crucial time, we will be using the latest resources to present and analyse facts and its impact on our day-to-day lives.

“As well as sport, we will also welcome the S4C weather team to the studio – I can’t wait and cross fingers everything will be working on Monday night.”