A “brazen” taxidermist who was trying to sell what was believed to be the longest illegal elephant tusk in the UK has been jailed for a second time for trading in endangered species.

He also admitted acquiring tiger skulls for a commercial purpose.

The 29-year-old was sentenced to 56 weeks in prison. 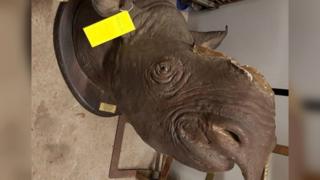 Halstead, of Glen View Road, was first investigated and cautioned in 2011 for breaches when running a taxidermy business, which was dissolved in 2019.

He was jailed in 2015 for buying a sperm whale tooth, a cheetah skull and a dolphin skull, and for offering to sell a snowy owl without a permit.

A joint investigation by the UK National Wildlife Crime Unit and Lancashire Police found he then offered to sell a black rhino skull, a sawfish rostrum and a sperm whale tooth without required permits in December 2017.

A police search of his home uncovered stuffed tiger cubs, rhino horns in his freezer, rhino heads and three elephant tusks, including one more than 6ft 6ins (2m) which Lancashire Police said was one of the largest ever seized in the UK.

Prosecutor Adrian Farrow told Preston Crown Court that Halstead used his legitimate taxidermy business as “a vehicle for his illicit trading” and had, in a Whatsapp conversation, told one customer from the Netherlands, who was buying 10 tiger skulls, that he did not fear customs officials as he had “never had anything stopped”.

Halstead pleaded guilty to nine breaches of the control of trade in endangered species regulations between September 2017 and January 2018.

Sentencing, Judge Robert Altham said the 29-year-old “knew what he was doing was wrong”.

“This was brazen, persistent, well-organised criminality,” he added.