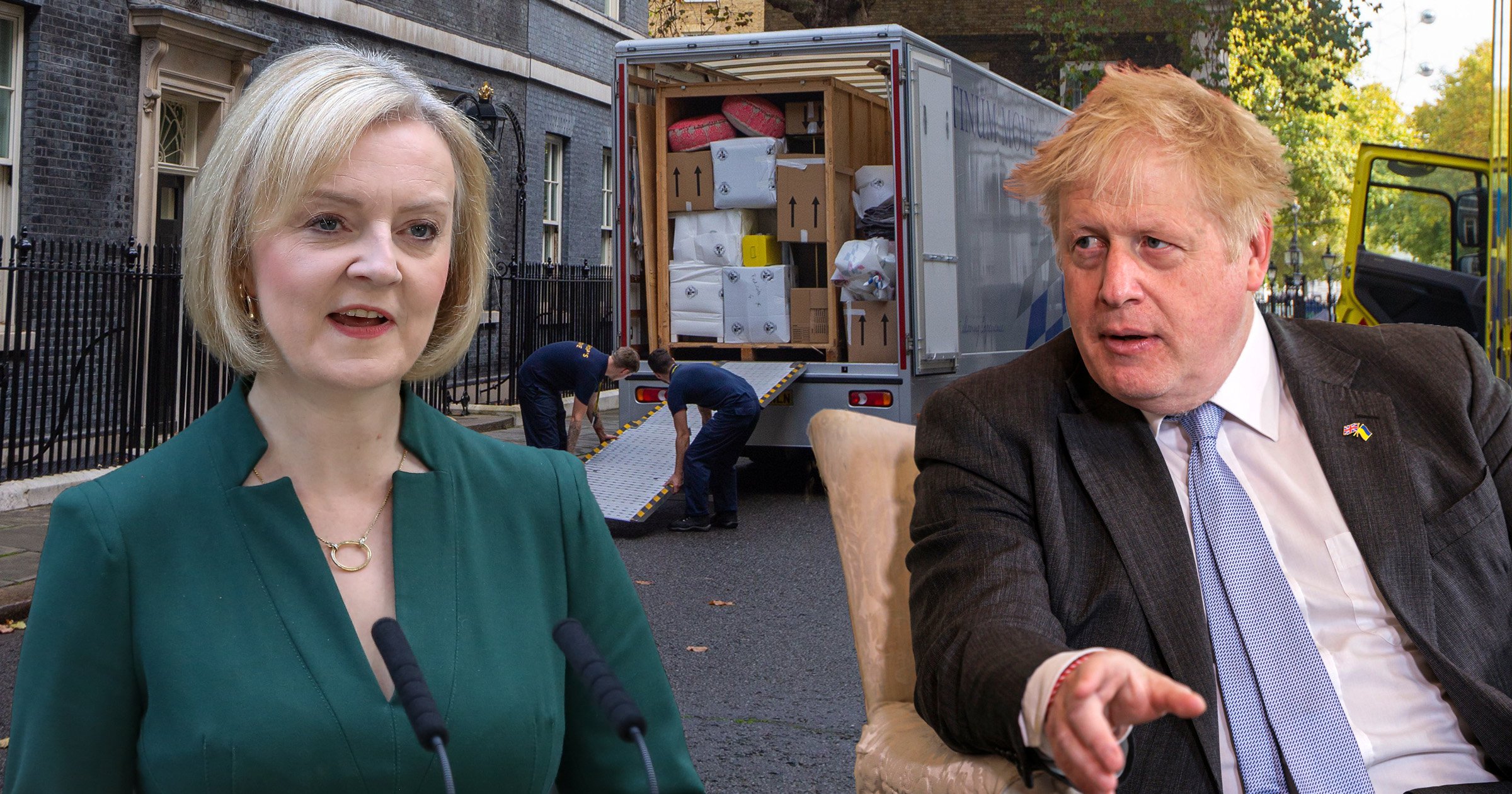 Liz Truss was left with ‘nowhere to sit’ when she was told the Queen had died, as Boris Johnson had ‘took all the furniture’ a book has claimed.

The former Prime Minister’s aides were left sitting on the floor of Downing Street when the news broke.

It was just three days after Boris Johnson had left Number 10, and clearly Ms Truss hadn’t finished unpacking all her boxes.

The PM had been in the Commons when a note was brought to her, telling her that the Queen was unwell.

Although she had already been briefed on this, she feared her condition had rapidly got worse.

Just a few hours later Ms Truss had already begun working on her speech to give to the nation.

But describing the scenes in ‘Out of the Blue: The inside story of the unexpected rise and rapid fall of Liz Truss’ the new biography of the ex PM, Harry Cole and James Heale have said there wasn’t even enough furniture for anyone to sit down on.

In the book it states: ‘Her Majesty died at 15:10. Truss was already working in the privacy of the No. 10 flat on what she would say.

‘Seating space was short after Boris Johnson had taken almost all of the furniture, so some advisers were sitting on the floor at 16:30 when the news came from downstairs via Case that the Queen had died.’

Boris had given Downing Street a mega makeover after walking through the doors in July 2019.

Both the PM and his wife, Carrie Johnson, were ridiculed for their taste when it was revealed they had spent more than £200,000 on transforming the flat at number 10.

The couple refitted the grace and favour apartment at No.11, which reportedly looked like a ‘John Lewis nightmare’ after Theresa May’s residency, with the help of society interiors guru Lulu Lytle.

A leaked copy of the estimate for the renovation revealed that the proposal for the No11 flat makeover included a £7,000 rug, a £3,675 drinks trolley and two sofas which cost more than £15,000 in total.

But it looked like none of that had been left behind for poor old Liz.

PM’s are allegedly given a £30,000 annual budget by the Exchequer to go towards their flat. The bill for the cost of paintwork and installation alone for the Johnsons’ project was £30,000.

It is still yet to be disclosed whether Liz Truss maxed out her furniture spending, but given she was there shorter than most Airbnb stays it would have been surprising.

Ahead of her time in Number 10 she did say she was keen on the idea of keeping the décor of the flat.

She said she believed in ‘value for money’ and when she was asked by LBC’s Nick Ferrari about the flat refurbishment, Ms Truss said: ‘All I can tell you is, first of all, I am from Yorkshire, so I do believe in value for money and not buying new things if you have already got things that are perfectly good to use.

‘Secondly, I think with the in-tray of issues that you have outlined earlier, I don’t think I am going to have time to think about the wallpaper or flooring.’

Her plate seemed to get even fuller within just a few days of taking over, seemingly her revamp of the flat took a beating.

While it remains to be seen just how much the new PM, Rishi Sunak is going to spend on the place.

That might well rely on how long he is in there, and with any luck it might be enough time to take her lectern, lettuce and white wine glasses.

Or if he is really lucky she might even leave him one or two safe seats.

The new biography, ‘Out of the Blue: The inside story of the unexpected rise and rapid fall of Liz Truss’ by Harry Cole and James Heale, by Harper Collins Publishing, is available to download now, and hard copies will be available from November 24.