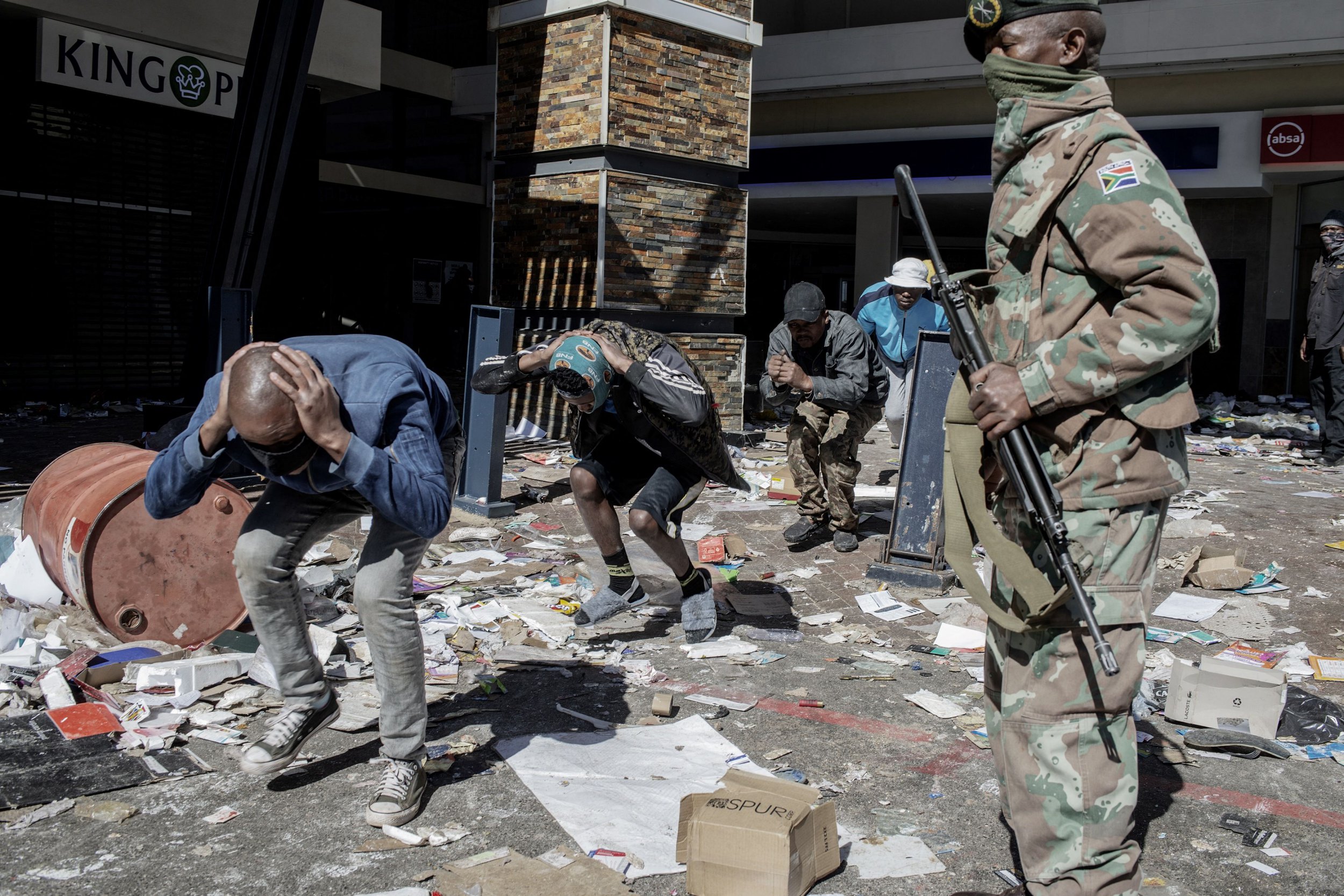 Shocking footage shows a woman throwing a toddler from a burning building after looters set fire to the shops below amid a wave of violence sweeping across South Africa.

At least 45 people have been killed in clashes sparked by the jailing of former president Jacob Zuma.

Soldiers have now been deployed onto the streets to try and contain the unrest, which has spread from Mr Zuma’s home in KwaZulu-Natal province to the country’s biggest city Johannesburg and surrounding Gauteng province, and to the Indian Ocean port city of Durban.

‘What we are witnessing now are opportunistic acts of violence.

‘There is no grievance, nor any political cause, that can justify the destruction we have seen.’

He warned on Monday that the unrest could harm the country’s vaccine drive, while disruption to supply chains could lead to food and medicine shortages in the coming weeks.

Mr Zuma, 79, was sentenced last month for defying a constitutional court order to give evidence at an inquiry investigating high-level corruption during his nine years in office until 2018.

He also faces trial in a separate case on charges including corruption, fraud, racketeering and money laundering. He pleaded not guilty in court in May.

Zuma’s foundation said there would be no peace in South Africa until the former president was released from jail.

It said in a tweet: ‘Peace and stability in South Africa is directly linked to the release of President Zuma with immediate effect.’

Troops moved into flashpoints on Tuesday as outnumbered police seemed helpless to stop the unrest, with columns of armoured personnel carriers rolling down highways.

The bodies of 10 people were found on Monday evening after a stampede at a Soweto shopping mall, Gauteng premier David Makhura said.

Hundreds of looters raided warehouses and supermarkets in Durban, one of the busiest shipping terminals on the African continent and an import-export hub.

Outside a Durban warehouse of retailer Game, looters stuffed cars with electronic goods and clothes. Inside, the floor was a mess of discarded packaging as the crowd emptied the shelves.

The rand, which had been one of the best performing emerging market currencies during the pandemic, dropped to a three-month low on Tuesday, and local and hard currency bonds suffered.