‘That can’t be right, Andrew!’ Raab in fiery clash with BBC’s Marr over EU’s Brexit stance

BBC One host Andrew Marr played the devil’s advocate for the Brussels bloc as he reminded Foreign Secretary Dominic Raab the EU is accusing the UK’s negotiating team of failing to compromise in the Brexit trade talks. Reading out EU negotiator Michel Barnier’s latest statement, Mr Marr said: “You say it’s the EU’s fault as it were. Michel Barnier says ‘the UK has not shown any willingness to compromise on fisheries, has refused to engage on credible guarantees for open and fair competition. 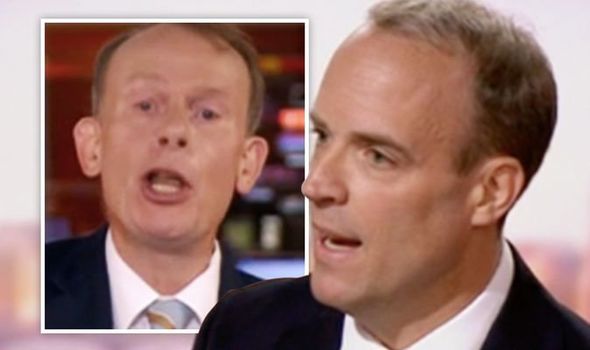 “‘Where the EU has shown openness to possible solution, the UK has shunned our offers’.”

But Dominic Raab furiously hit back: “So just factually, on the question of open and fair competition we’ve agreed to sign up to what Canada did and other countries who negotiated a free trade agreement with the EU.

“So that’s not true.

“On fisheries, let’s just look at this for a moment, having seen UK fisheries and the UK fishing industry pretty much decimated as a result of EU membership, the EU’s argument is we should keep control and access to our own fisheries permanently low.

“That can’t be right, Andrew.”

He added: “So look, we want a deal, the arm of friendship and goodwill is outstanding.