Spain will allow visitors from the UK and Japan for holidays without a negative PCR test for COVID-19 from Monday, the country’s government has said.

People can enter the country for non-essential journeys however Spain remains on the UK government amber list, meaning anyone returning has to self-isolate for 10 days and take two coronavirus tests.

Spain‘s amber status also means UK government guidelines recommend the public should not travel there unless for an essential reason.

This also includes the Balearic Islands but excludes the Canary Islands, based on the current assessment of COVID-19 risks, according to the Foreign Office. Spanish Prime Minister Pedro Sanchez said: “From Monday, Spain will be delighted, very delighted to welcome all British tourists and tourists from all the countries that I’ve just mentioned. They are welcome to our country without restrictions and without health requirements”.

He added: “I’m pleased to inform you that a ministerial order will be published today exempting citizens from the UK and other countries such as New Zealand, South Korea or China from temporary restrictions for non-essential trips to Spain.” 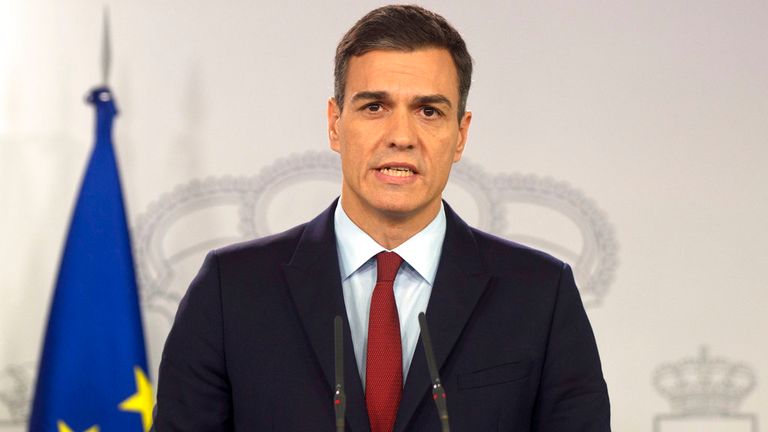 Mr Sanchez also said that vaccinated travellers from non-European countries including the US will be welcome from June.

Spain’s nationwide State of Emergency declared by the country’s government in October last year came to an end on 9 May, however some restrictions and curfews remain in force and may vary between regions.

Face coverings continue to be mandatory for anyone over the age of six on all forms of public transport and in many other indoor and outdoor public spaces, while people are expected to socially distance at 1.5 metres.

Holidaymakers keen to visit countries on the government’s amber list such as Spain, France, Greece and Italy have been urged by Transport Secretary Grant Shapps to have “more patience”.

On those returning to the UK from amber list countries, he told Sky News: “There’s a heck of a lot of hassle involved.

“It’s expensive. We’re not at the stage of saying to people, go to those places on holiday, in fact, please don’t.” Asked why holidays were still being sold to countries on the amber list, he said the government had moved away from a system where things were “banned and illegal” and now expected people to “apply a bit of common sense”.

Mr Shapps said people should only go on foreign holidays to green list countries, such as Portugal, which is currently the only major viable tourist destination on that list.

Those returning to England from nations on the green list will need to take a pre-departure COVID-19 test and also a post-arrival test, but they will not need to self-isolate.

People coming from countries on the amber list will have to take a pre-departure test, and tests on day two and day eight of their arrival.

They will also be required to self-isolate for 10 days, unless they receive a negative result from an optional private test on day five of their arrival (test to release scheme), and can end their quarantine early.

Spain has been one of the hardest-hit by the pandemic in Europe and has recorded 79,601 deaths and more than 3.6 million cases.