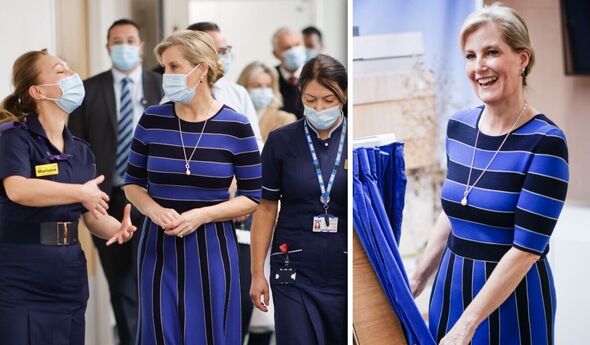 Sophie Wessex has been pictured on a visit to Heatherwood Hospital near Ascot as the royals continue their duties despite the ongoing feud with Prince Harry. She was seen sharing a laugh with NHS staff as the health service continues to struggle under immense demand and grapples with unsettled pay disputes with the Government.

Sophie Wessex and other members of the Royal Family have not directly responded to some of the potentially damaging allegations made by the Duke of Sussex in his memoir.

Harry accused the Royal Family of briefing the press against himself and Meghan Markle, spoke openly about his deteriorating relationship with Prince William, and also appeared to criticises the Queen Consort Camilla.

The Duke alleged in his book that William once physically assaulted him, and also branded Camilla “dangerous” because “of the need for her to rehabilitate her image.”

Reports have previously suggested that Sophie Wessex enjoys a better relationship with Harry than other royals, and this is perhaps why she is not targeted by him in the book.