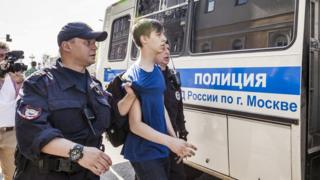 A new Russian law envisages jail terms of up to two weeks and hefty fines for people who get children to join unauthorised demonstrations.

Russian President Vladimir Putin signed the law against mobilising child protesters. Organisers can be fined up to 50,000 roubles (£569; $720).

Opposition activist Alexei Navalny’s rallies have resonated with the young.

Mr Navalny, who has attracted thousands to his protests, has been detained repeatedly for unauthorised rallies.

In recent months there has been a wave of protests against plans to raise the retirement age. From next year that age will be pushed back in phases; by 2036 it will have risen to 65 for men and 60 for women.

The new law sets higher fines for officials who attract children to demonstrations (up to 100,000 roubles) and for organisations which do so (up to 500,000 roubles).

“We have to deliver a blow against all those who try to use our children for their own selfish political interests,” he said, quoted by the government daily Rossiiskaya Gazeta.

This summer tens of thousands rallied in cities across Russia against the pension reform. Mr Putin’s approval rating dropped amid the discontent.

Russia tightened the rules for opposition rallies after a wave of protests – largely unsanctioned – in 2011-12. The trigger for that anger was vote-rigging during the 2011 parliamentary election.

Now even those staging peaceful, one-person pickets are regularly detained in Russia.